ROCHESTER HILLS — Although Halloween was five days ago, Jarrett Hageman openly admits that he was never so scared in his life than he was late Saturday afternoon.

Even in the broad daylight with no ghosts or ghouls around to spook him.

Walking gingerly up to the penalty spot with the game on the line, the Mattawan senior laced a shot off the left goal post and into the goal in what proved to be the biggest and most memorable score in Wildcats lore.

Hageman’s penalty kick came as his team’s fifth shooter in a shootout and was enough to propel 11th-ranked Mattawan to a 1-0 victory over unranked Dearborn Divine Child in the MHSAA Division 2 Final at Rochester Hills Stoney Creek High School.

Mattawan won the shootout 4-3, making its first, third, fourth and fifth shots to prevail. Nick Hare, Dylan Burkett, Tate Rosenhagen and Hageman tallied in the tie-breaking shootout for the Wildcats.

Divine Child converted its first three kicks only to see its final two attempts sail over the crossbar. Alex Higgins, Shane Ciucci and Justin Stack finished their PKs for the Falcons.

“I was never so scared as I was walking up there to take the shot,” admitted Hageman. “I mean, I was so nervous. You dream about being (in this position), taking a shot in a shootout. I knew in my heart that I could make it, but I thought I’d missed because it hit the goal post. Thankfully, it went in and we finally won a state championship.”

Mattawan’s journey is somewhat unlike most state powers’ programs. Fielding legions of state-ranked teams dating back to the 1980s, including three previous Final Four squads over its storied history, the Wildcats had never reached the MHSAA Finals until this weekend.

This end result leaves veteran coach Kirt Brown, in his 11th season at the helm of the Mattawan program, breathing a sigh of relief.

“We came close in (2015 and 2011), and although I was at a different school (Parchment) way back when, the school got to the semis before I got here,” noted Brown. “We finally got it done this time. I couldn’t be more proud of these guys. This was somewhat of an ugly game. We scrapped and fought. You could see that both teams were tired in the second overtime. It’s wasn’t pretty. But I’ll take an ugly win over a pretty loss any day.” 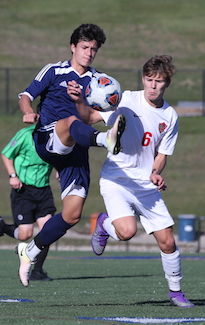 A year ago, Mattawan made a run to the Semifinals before running out of gas and dropping a 4-2 decision to Grand Rapids Forest Hills Northern. That was with all-state Dream Team midfielder Nick King directing the show for a team that scored 102 goals. King graduated  last summer along with a talented class.

This season, Mattawan outscored the opposition 55-19 over 28 total games, pulled of a stunner with a 2-0 upset of No. 1-ranked East Lansing in the Semifinal on Wednesday, and outscored its seven postseason opponents by a combined 14-2.

“We knew we had a good team, but I think when we defeated East Lansing, that’s when we believed it,” offered Brown. “We didn’t have an easy road, either. We beat (Stevensville) Lakeshore in the opening round and they were ranked. We beat Marshall and Holland in the Regionals and they were ranked. Divine Child might as well been ranked. They made a great run to get here, too.”

“Last year we were even better, more skilled,” said Hageman. “But the seniors this year have something that no other (senior class) has, and that’s a state championship.

Senior Casey Kirkbride notched his team’s 14th shutout of the campaign. He made eight saves throughout 80 minutes of regulation and two 10-minute overtime periods.

Divine Child held a narrow 13-10 shots edge, including 8-5 with shots directly on frame. Mattawan held an 11-5 edge with corner kicks but could not beat Divine Child’s Evan Mazurek, one of the state’s top junior goalkeepers, until the shootout.

“The defenses both played great; both goalkeeper played really well,” said Brown. “When you get to a shootout, anything can happen.”

It was the end of unranked Divine Child’s Cinderella ride. With several state-ranked teams going out early, the Falcons snuck up and made the deepest run in school history. They knocked off No. 13 Dexter in the Regional Semifinals and also blanked Fenton in the Semifinal on Wednesday; Fenton had spent time in the top 20 before dropping out just before the start of the postseason.

“It was an amazing run by our guys,” said Divine Child coach Dean Kowalski. “I think we were just on the cusp of being a great team. We finally put things together and made a run.

“I didn’t mind being under the radar a little bit,” added Kowalski. “When we saw a lot of very good teams go down, we thought we might have a chance. We knew the talent was there. Defensively, we were very solid. We only gave up one goal in the tournament until the shootout. If we came back on Sunday and played again in another shootout, maybe it would end differently.”

Both goalies made several key plays to keep the game scoreless.

Kirkbride dove to his left in the second half to stop Ciucci’s blast to the near post.

Mazurek was quite active clearing the 11 corner kicks and made perhaps the biggest save of regulation, leaping to his left to punch away a 22-yard strike from Marquess that was destined for the far corner with 4:18 to play in the second half.