Thirteen Novembers ago, Drew Nichols, then a senior captain, took a bus ride home from Troy High School with the Traverse City West boys soccer team. The Division 1 boys soccer championship trophy was happily along for the ride as the Titans had just beaten Livonia Stevenson 1-0 in the Final.

Last November only an overtime loss prevented the now-West assistant varsity coach from taking a very enjoyable similar bus ride. The loss was at the hands of Troy Athens, and the ride home departed this time from Comstock Park.

Perhaps this November he’ll get another shot from Comstock Park, one of two sites to be used for the coming season’s championship tilts. He plans to be on the sidelines again with head coach Matt Griesinger as the Titans dream of yet another long postseason run (COVID-19 permitting, of course).

While many would think there would be a world of difference in the two long November bus rides after a Division 1 Final with differing results, Nichols believes there really wasn’t.

“The way I saw it, both 2006 and 2019 bus rides had a bunch of exhausted players that fought hard in the pinnacle game of the year,” Nichols pointed out. “I'm not saying there wasn't some pain for the boys to be on the losing side, but in the end I think they still recognized the amazing achievement it was.

“I think everyone that played or watched that 2019 game recognized that it was a moment away from ending in a win,” he continued. “They held their heads high and should command the respect of the program for being only the second team in its history to reach that game.”

Nichols became the varsity assistant coach at West in 2015 after coaching the Titans’ JV two seasons. Griesinger took over the head coaching position at the same time from the Titans’ first coach – and now athletic director – Jason Carmien.

Nichols and Griesinger guided the Titans to Regional appearances in 2015, 2016 and 2019. Nichols said he doesn’t know what to expect in 2020 with all the uncertainties the nation and world are facing.

“The COVID interference has been disastrous on so many levels, and it will certainly disrupt the quality of play for the 2020 fall season,” Nichols said. “We had a strong result last year and have a lot of returning players, so on paper we have the potential for another great season.

“However, the landscape of fall sports and soccer in particular will be so different this year that it's impossible to know how everything plays out,” he continued. “There was a huge loss of development without club soccer or college camps over the spring and summer. From my perspective, the best way to help is to make sure players come into the season fit and focused.”

Nichols, whose wife Andrea gave birth to their daughter Quinn after last season, expects to have an impact on future generations regardless of how sports weather the impact of COVID-19.

“The game finds its way into the hearts of kids much earlier than they meet me, but I really enjoy being a positive influence on their growth and appreciation for what the game can offer,” he said. “I don't pretend to be the absolute authority on anything, but I have perspective to share and hopefully the time spent in our program will foster their appreciation of the game itself and the skills (and) values it can teach you.” 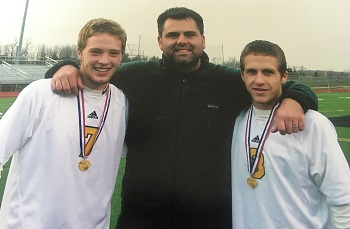 The West program has produced two Michigan Mr. Soccer Award winners during the school’s 20-year history in the sport, Dalton Michael (2016) and Casey Townsend (2006 and 2007). Nichols has ties to both.

Michael and his twin brother Donovan are now playing at Western Michigan University, and both played under Nichols. Townsend went on to a stellar career at University of Maryland and played in Major League Soccer. He was the No. 5 overall pick in the 2012 MLS draft and played for Chivas USA and DC United. All of that came after he scored the only goal in that 2006 Division 1 Final, with Nichols a teammate.

Nichols, a midfielder who went on to play at Hope College, made the all-state third team with nine goals and five assists as a senior that fall at West. He and Townsend had played side by side since their beginning soccer days at Traverse Bay Area Youth Soccer and with its premier club, NorthStorm.

“I sometimes forget just how much Casey has accomplished because first and foremost he is just a goofball friend of mine,” Nichols said. “We played together in our formative years, so even though he was the difference-maker in a lot of games, it was hard for us to recognize just how high his ceiling was at the time. Clearly we found out when he progressed into college and the professional leagues, and it was a blast to watch.”

Carmien, the coach of the 2006 championship team, recalls the connection Nichols and Townsend had.

“Drew scored some big goals and really was an anchor to our team,” Carmien said. “Drew caused a lot of turnovers and created transition scoring opportunities by combining with Casey or playing balls in behind defenses.”

Carmien anticipates Nichols will continue with Griesinger to foster the Titans’ success.

“Drew was a great player, he was a key piece in some very good Titan teams,” Carmien said. “I am proud to see him on the sidelines, working with our kids at practice and still involved in the program.  We have alumni that still follow us each fall, and last year was a lot of fun; (I’m) glad Drew was a part of it, and hopefully we can have continued success.”

Carmien and Griesinger have impacted Nichols’ coaching style, which is also linked to his studies abroad as a student at Hope. He played some soccer in the Spanish cities of Murcia and Pontevedra as he earned academic honor roll recognition all four years at Hope. 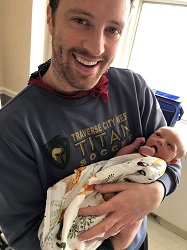 “My expertise comes from my development as a player through high school, college, and afterwards playing and engaging the soccer community in a variety of countries,” Nichols said. “My coaching style comes heavily influenced by Jason Carmien, the founding father of the West soccer program.

“He trained me as a high school player and then again as a coach when I joined the staff around 2013,” Nichols elaborated. “Of course, more recently, head men's coach Matt Griesinger has challenged our staff and the program to exceed the high standards set by Jason.”

Nichols is not a school teacher. He manages payrolls for several companies as the director of operations for Integrative Payroll Services in Traverse City. Still, he intends to stay with coaching for the foreseeable future.

“My ‘career’ goal is to merely engage the soccer community where I live and stick around as long as I can offer value,” he said.  “Obviously I was drawn to give back to the program I participated in as a player, and that's as far as it will likely go. With my daughter's birth this year, odds are good that you'll see me in the girls coaching pool in a few years.”

Rest assured, no matter where he is, Nichols will always remember the feeling of winning a state championship.

“It was amazing,” he said. We had a chip on our shoulder the whole playoff run since we were the nobodies from up north, so to win brought a mixed bag of feelings – excitement, accomplishment, relief, vindication,” he said.

“We didn't play particularly well, but most teams don't once they make it to that game. Nerves take their toll, just like with a big rivalry game, so anything can happen. That has become even clearer now that I have coached both rivalry games and a state Final. That day we were fortunate to have a future All-American to clinch it for us.”

But, as a coach, Nichols said he is “hoping to leave it one of many in the West program trophy case.”

PHOTOS: (Top) Drew Nichols was a standout midfielder for Traverse City West during the mid-2000s, and led from the sideline as the Titans’ assistant varsity coach during last season's Division 1 Final. (Middle) Nichols, left, enjoys a celebratory photo in 2006 with then-West coach Jason Carmien and teammate Dan Kellogg. (Below) Nichols and his wife welcomed a daughter after last season. (Photos courtesy of Drew Nichols.)