In a relatively short time, Aljabaly has made an incredible impression on the cross country course. He started running with Coldwater's high school team only midway through his sophomore season but finished last fall placing eighth at the Lower Peninsula Division 2 Final. Now a junior, Aljabaly is undefeated this season and earned the Michigan National Guard "Performance of the Week" by winning Saturday's Otsego Invitational Division 2 race in a school-record 15:34, finishing just ahead of two more 2015 all-staters in Grand Rapids Christian's Justin Varineau and Otsego's Alex Comerford.

Also a starting midfielder on Coldwater's No. 7-ranked soccer team, Aljabaly has led the Cardinals' cross country team to a No. 4 ranking in LP Division 2 – they finished second as a team at Otsego only to top-ranked Grand Rapids Christian. Varineau had finished one spot ahead of Aljabaly at last season's MHSAA Final – but Aljabaly was most familiar with Comerford (13th in LPD2 in 2015) as the two already had faced off this fall in a race of undefeated runners Sept. 24 at the Jackson Invitational. Aljabaly's time at Otsego also would've won that event's Division 1 race by 40 seconds.

Aljabaly played junior varsity soccer and ran track as a freshman, qualifying for the MHSAA Finals in the 3,200-meter run. At the convincing of his cross country coaches, Aljabaly gave that sport a try last fall and should contend for the LPD2 title this season and next; his 15:34 would've finished third at last season's MHSAA Final and he also broke 16 minutes with a 15:46 at Jackson. He'll likely face his fastest challenge so far this fall at Saturday's Portage Invitational, where he finished seventh in the Division 2 race last season.

Cross Country coach Jim Bilsborrow said: “He is a real competitor who hates to lose. He also studies his opponents and knows what are their strong and weak points, which he tries to exploit. Now that he has made cross country his primary sport, he has been able and willing to do some more intense training, which of course has made him even better. He is also a real ‘team player’ who cares about his teammates and how well the team does. Of course, I must add that he is blessed with talent, as all great runners are endowed, but fortunately he is using his talent and not wasting it.”

Performance Point: “We raced the week before at Jackson and the course was pretty fast, and they said Otsego’s is even faster,” Aljabaly said. “I was 1.5 seconds away from the record at that (Jackson) race, so I had a good feeling about Otsego. … Usually I start kicking at the 2-mile mark; Coach is usually standing there telling me when to kick. But I waited until the 3-mile mark, the 2.9. I didn’t know if one of (Varineau and Comerford) would go or not. We just stayed together until I went, and I felt like they just dropped back. But (Varineau) was kicking strong; he was only four tenths of a second behind me. I was told he was six seconds behind me at the 3-mile mark. Everyone was just yelling so loud, it made me run faster.”

Doubling up: “(Playing two sports) is going better than last year. It’s pretty hard, but we’re 14-1-1 (now 15-1-1) in soccer and we just locked up the conference, so we’re doing pretty good there too. It’s really flexible, the schedule. The coaches talk it out before the season starts. Cross country is my primary so I go to cross country practice and I go to soccer practice unless there’s a meet the same day, and then I usually go to the cross country meet. I haven’t missed a soccer game, but this weekend (running) at Portage, I’m going to miss a soccer game.” 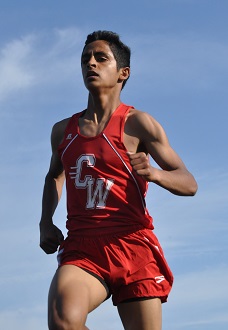 Back for more: “Last year I wasn’t going to do cross country, but Coach Bilsborrow got me to do it. I started halfway through the season and at Portage last year I broke the school record but on a short court (just less than 5K), and that’s what motivated me to keep running.”

Born to run: “I like the competition. I like being nervous before the race, the feeling of knowing who you’re up against, the competition mainly. … We didn’t really have strong competition at the first few races. At Jackson I went against (Comerford) and I kinda realized how he races and starts off at the beginning. At Otsego I thought I’d get (Comerford) but I wasn’t sure about (Varineau). ... (Competition) pushes me. It motivates me. At Jackson, Coach told me (Comerford) was undefeated too. One of us was going to lose that day.”

Now I know: “Last year at the Portage meet, I went out too fast. I didn’t know who I was going against, and it was the top 10 kids in the state. I led for a mile, but I didn’t know how to race last year; I didn’t know how to start and how to finish and how to race. I raced this summer at 5Ks and (learned) strategies and talked to Coach about it. Grand Rapids Christian, Otsego and most of the rest of the good kids are going to be there (Saturday), and it’s going to show me what I can do at state.”

PHOTOS: (Top) Coldwater's Shuaib Aljabaly cruises through a course this season. (Middle) Aljabaly is undefeated in 2016 and will next race Saturday at the Portage Invitational. (Photos courtesy of the Coldwater boys cross country program.)