Kirkbride watched Mattawan’s run to the Division 2 Semifinals last season from the sideline – as a junior on the junior varsity, and one of two goalkeepers on that team at that. But the 6-foot-1 senior has made himself into a player capable of helping the Wildcats take another step this fall, and his four MHSAA tournament shutouts including last week’s over No. 8 Holland earned Kirkbride the Michigan National Guard “Performance of the Week.” Mattawan entered the postseason ranked No. 11 in Division 2, and this week also shut out top-ranked East Lansing 2-0 to reach an MHSAA championship game for the first time in this sport.

After he and his team surrendered own goals three times during the first four games this fall, Kirkbride has gone on to notch 13 shutouts over the team’s last 22 games with a season goals-against average of 0.68 and 0.88 save percentage. He made nine saves Wednesday against the Trojans and has the Wildcats at 21-4-2 after they graduated 11 players including six all-staters off the team that finished 23-3-1 a year ago.

Kirkbride also played subvarsity basketball during his first two years of high school and should be in the running for academic all-state in soccer with a 3.73 grade-point average. He’s strongest in math and the sciences and is considering studying engineering in college, perhaps at Western Michigan University. But first, his team plays Dearborn Divine Child at 3 p.m. Saturday at Rochester Hills Stoney Creek for the Division 2 title.

Coach Kirt Brown said: “He played JV for me last year and showed determination. He’s just got a great attitude. I talked to him (Wednesday) night; he was the first kid I went after when they were all hugging each other, and (I asked) if he would have thought at the beginning of the year he would shut out the number one team in the state semifinals. He’s been dynamite; he’s got a good defense in front of him, but he’s made some great saves as well. He’s long and rangy, and he’s got that never quit attitude. He’s kinda measured, and he’s learned and he’s grown as the year has gone on. He knows how important he is to our team, but he’d be the first to say ‘I have a really good defense in front of me.’”

Performance Point: “I’m just really thankful to have a good defensive line that limits the chances opponents have,” Kirkbride said. “They haven’t had too many clear opportunities where I’ve had to come up with saves, and I’m thankful for that. I try to keep (my defenders) organized, but they did a good job of being focused and really just staying strong on their marks; I try to help on that too. The one (save) that sticks out (from last week) is when the ball hit the post … I was in mid dive and it just went past my fingers and came back and hit off my face, and then it goes off for a corner. I was just thankful it didn’t bounce off my nose or a different part (and into the net).”

New team, all team: “I think (our success) comes down to being more of a team on the field because when we have chances to go forward we make the most out of them and we don’t give the ball up as much. We’re just on the same page more defensively and offensively. Having that sense of knowing teammates know what you want, because when you have the ball, they know how you want them to play. And we don’t have selfish players; for the most part, all of us are selfless and the goal is for the team.” 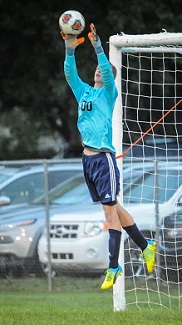 On the move after Marshall: “Beating Marshall in the Regional Semis, it’s pretty close to greatness. We were outsized – they had some really big kids, and we never really had to face too much of that before. Seeing how we could handle it, we just played through it. We ended up conceding a goal right after halftime, but we didn’t drop our heads at all. Determination is really what that is. Our personnel, I’ve seen a lot of great things from these players, so I know we’re capable of it.”

JV as a junior: “It was tough last year because I was goalie part of the time, and another guy was goalie part of the time, and sometimes we didn’t know until the day of the game who would play, or that one would play one half and one would play the other. I kinda didn’t want to play goalie, but I definitely would not question if Coach wanted me. … I wasn’t so confident in myself (this season), but seeing (my teammates) were, that meant something to me. That’s how (important) being on a team of friends is. (I learned on JV) how important it is to make connections with your teammates. At the beginning of (last) season I didn’t have too much connection to my other teammates, but as the season progressed it got better.”

Quick thinking: “Playing goalie, you need to know decision making. Know the pros and cons without even thinking, that definitely comes into effect. If I have a decision in my mind, I’ll do it.”

PHOTOS: (Top) Mattawan keeper Casey Kirkbride (middle) gathers a loose ball against Stevensville Lakeshore earlier this season. (Middle) Kirkbride snags a shot against Lakeshore, which was ranked No. 16 in Division 2 at the time. (Photos by Steve Taylor@TSS Photography)