The Pilgrims were on a mission of their own – for respect – and they walked off the Crestwood Middle School field with plenty of it Saturday after a dramatic 1-0 victory over Covenant Christian that earned the Division 4 championship.

“We loved being the underdogs today,” said Lansing Christian sophomore keeper Chase Hansen, who helped his team withstand a furious Covenant rally over the final 20 minutes. “There was a lot of pressure at the end, but I just handled it by playing goal the way I’ve always been taught.”

Jordan Terry, the Pilgrims’ all-state senior forward, scored the game’s only goal 7 minutes into the second half, taking advantage of a brief open moment against the Covenant defense, and whipping a point blank shot from the 18-foot box over the head of keeper Austin Brower for the game’s only score.

“I can’t really describe exactly what happened on that goal; it was just a split-second and the ball was on my (left) foot,” said Terry, who finished his senior year with 27 goals and 11 assists for the high-scoring Pilgrims. “I just had a go at it, and it got in there on the top of the net.”

Lansing Christian (22-0-1) came into the game with an outstanding record and on a recent hot streak, but was still considered an underdog because of the outstanding soccer tradition and superior size of Covenant.

The Pilgrims were playing in their first-ever championship game and failed to make it out of Regionals the past three years. And, in spite of their unbeaten record, they could only manage to garner honorable mention status in the final Division 4 soccer coaches poll. 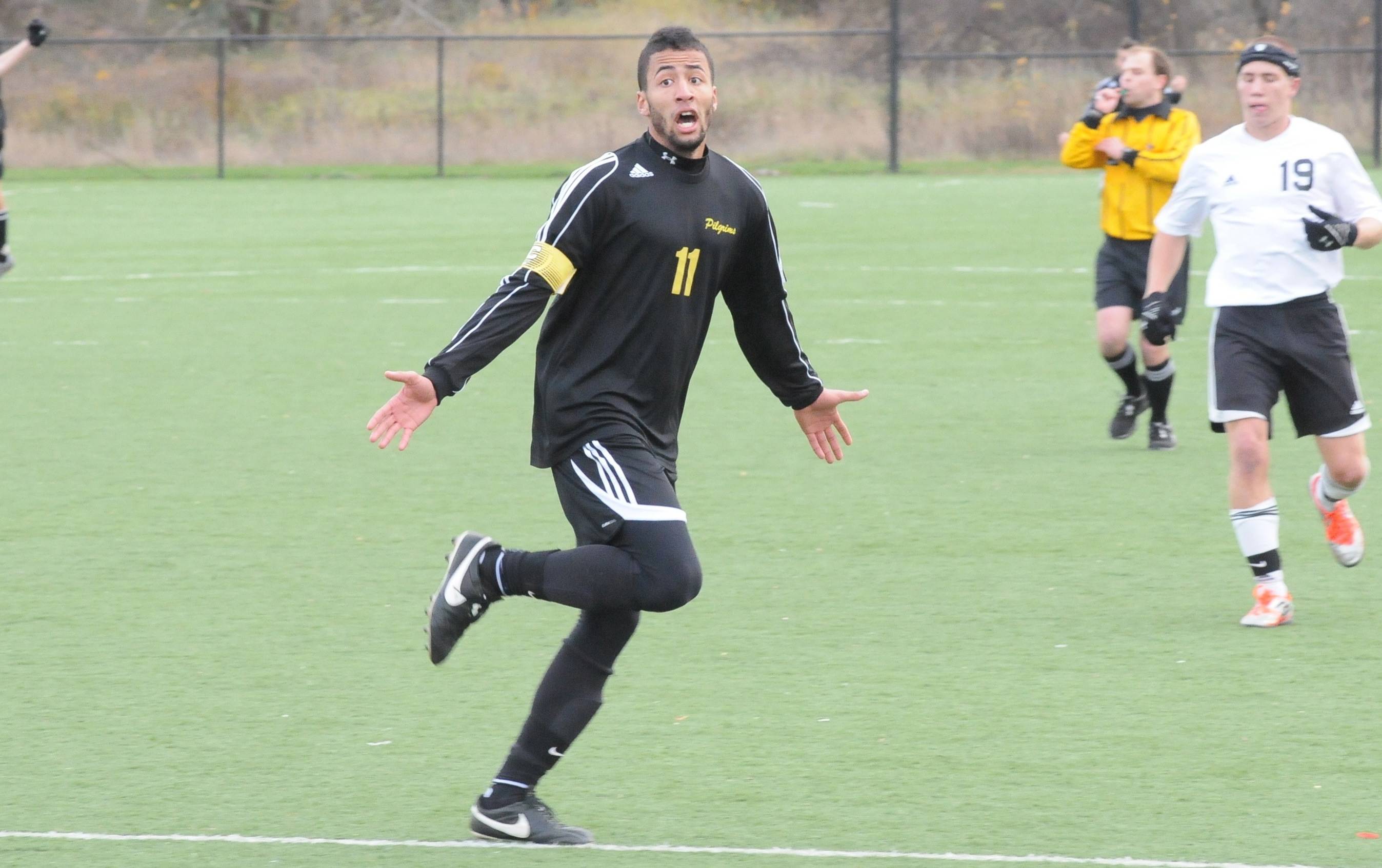 Led by four double-digit goal scorers in Terry (26 goals), Lang Jr. (18 goals), Brayan Guzman-Ortiz (11 goals) and Alex McDowell (11 goals), Lansing Christian outscored its six postseason opponents by a combined score of  22-1. The Pilgrims used their speed to overwhelm one larger opponent after another.

“We can’t do anything about how small we are, so we try to change the game,” sixth-year Lansing Christian coach Joel Vande Kopple said.  We wanted to get the ball out on the pitch and run.”

Terry’s goal appeared to stun the Chargers, who dominated the final 30 minutes of play but were unable to convert on myriad scoring chances. Derek Dykstra nearly scored on a backward kick with 19:18 remaining; Corbin Prince, Travis Bouwkamp and Cole Bleyenberg had good looks down the stretch; and Jared Minderhoud was just high on a great chance off a corner kick with 6:29 to play.

“We just couldn’t find the back of the net today,” said 10th-year Covenant Christian coach Mike Noorman. “That’s really the only thing we didn’t do. They are obviously very good, and we didn’t capitalize on the chances that we had.”

Lansing Christian also had several other good scoring opportunities, most of them in the first half. Lang clanked a shot off the post 9 minutes into the game, and the Covenant defense almost scored a costly “own goal” 13 minutes before halftime.

The final minutes were a flurry of activity, as Lansing Christian defenders, notably Zach Hagy, Nick Ballein, Gabe Loredo and Josiah Granger, fought valiantly to protect the precarious one-goal lead. After the final seconds ticked off, the Pilgrims swarmed Coach Vande Kopple while the Covenant players lay strewn all over the field in disbelief.

“To be honest, in those last few minutes we were just holding on,” said Vande Kopple, whose team finished unbeaten, with one 0-0 tie in the sixth game of the year against Jackson.

The loss was particularly devastating for Covenant since it lost by a goal in last year’s Division 4 title game as well, 3-2 against Hamtramck Frontier International.

Covenant, which finished 22-2-3, was champion of the soccer-rich River Valley Conference and defeated No. 2-ranked Kalamazoo Hackett Catholic Central (1-0) in a shootout in the Regional Final and highly-touted Bellaire (3-2) in the Semifinal. But once again, their quest for an MHSAA championship came up one game short.

On the other side of the field, Vande Kopple was struggling to find the right words.

“I don’t think I will realize exactly what we just did for a few weeks,” Vande Kopple said. “When it hits me, I’ll be able to explain it a whole lot better.”