NOVI – Wyoming Potter’s House’s first trip to the Division 4 soccer championship match was a successful one, to say the least.

On Saturday at Novi High School, the Pumas (24-3-1) lived up to their nickname, racing past Clarkston Everest Collegiate 3-0 to claim their first Finals title.

It was the first Finals appearance in boys soccer for both schools.

Potter’s House had knocked off No. 2 Grandville Calvin Christian, with the Pumas winning three one-goal games and their District final in a shootout on their way to the Final.

Potter’s House, boasting nine players taller than 6-foot, took the fight to Everest with their quickness for most of the first half as both teams missed a couple of scoring opportunities. 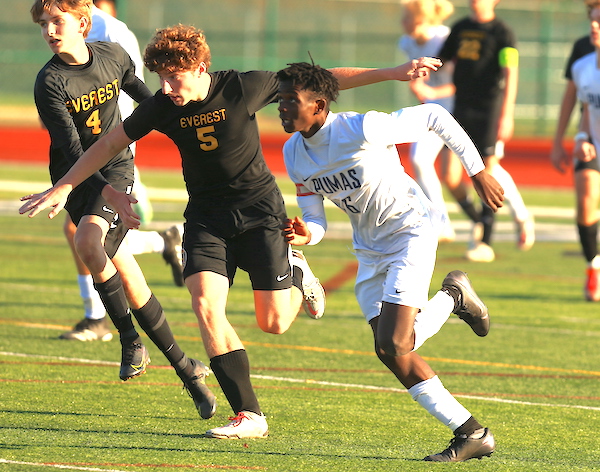 “These guys have been working passing patterns for the last month-and-half,’’ said Pumas coach Mike Colago. “Guys have been hitting their spots, playing between the lines. A lot of experienced players and a lot of guys buying into what we are doing. We just try to dominate from the beginning and play really fast.’’

Forward Jonathan Stout, the team’s leading scorer and a Michigan State recruit, finally got the Pumas on the board with a boomer from 25 yards out at the 15:27 mark of the first half. It was his 27th goal of the season.

“There were a bunch of alumni here and guys I played with in the past,’’ said Stout. “This is the first time we’ve made it this far. For future generations coming here, they can say we can do this because the team before us did it. It builds confidence.’’

Quickness paved the way for the Pumas’ second goal as Yosia Mukanda put the eventual winners up 2-0 with nine minutes left in the first half when the Mountaineers were unable to clear the ball out of their end.

Masengesho wasn’t technically credited with a goal because it hit an opposing player on the way. But he was the initiator of the action that led an Everest defender to accidentally put the ball in his team’s own net with 5:59 left in the half to make it 3-0.