Watching the Imlay City boys soccer team fluidly move the ball around the field, one can’t help but notice the players have a connection built from plenty of time on the pitch together.

The majority of last year’s team, which advanced to a Division 2 Regional Final, is back, and the majority of that group is concentrated in the junior class. Several of those returning players also play club ball together at Sporting Michigan.

But it goes back further than that.

“I had all these kids back when they were 10 years old playing for San Marino,” Imlay City coach Luis Hernandez said, referring to the team’s earliest club roots.

But that’s not far enough back.

“We’ve been playing since we were little, probably like 5 years old,” said junior forward Sergio Galiana. “We all ended up playing in AYSO in Imlay City, but we would play in the trailer parks a lot, too. We formed a group that pretty much liked playing, and we were just playing for fun.”

All of that time together has already paid off on the field, as last year’s Spartans matched the program’s deepest-ever postseason run, perhaps earlier than they had anticipated. But now they want more, and everyone in the program believes they have the team – and teamwork – capable of doing it.

The Spartans have started the season 8-1-1, with the one loss coming in their own tournament against Berkley, a Division 1 team that was unbeaten through its first eight games and had allowed just two goals.

Imlay City has picked up where it left off after winning the program’s first District title since 2014. Hernandez said about 90 percent of his team is back from last year’s squad, and that includes 13 juniors, seven of whom are starters. Among that group are Galiana, a second-team all-state selection, and midfielder Edson Zepeda, an honorable mention all-state pick.

“We have a lot of players coming back, and it looks like it’s going to be a good season for us,” Hernandez said. “But we still have to work for it. As we are improving, other schools are also.”

Hernandez is entering his 11th season as head coach at Imlay City, but his time with the program goes back to his playing days, when he was on the first team in school history. He can appreciate how far the program has come, because he’s lived it. 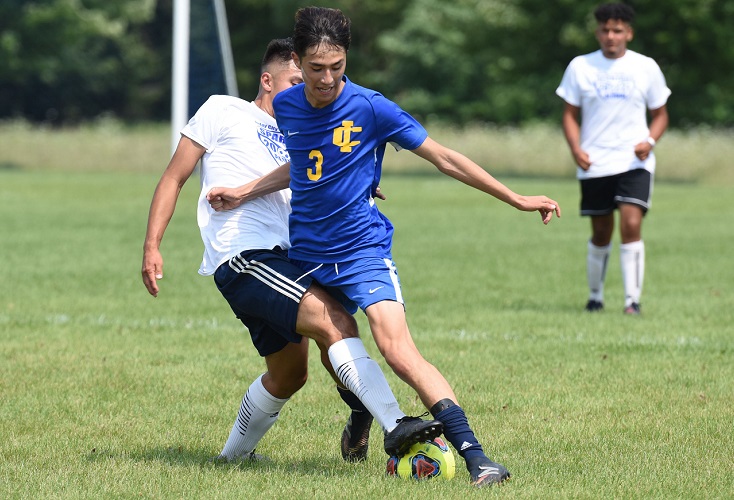 “Back then, the team was just pure heart and wanted to play soccer at all costs,” said Hernandez, who graduated from the school in 2003. “Rob Schwalbe, he fought tooth and nail so we could start a program here. He was really passionate about it and still is. Every time Coach Schwalbe shows up at some of our games, I always introduce him to the new kids as the father of the program. He was the one that started it all, and without him, we couldn’t have done it.”

When Hernandez came back to the program in the late 2000s as an assistant, he knew there was a unique opportunity to build something special in Imlay City.

“This is a really enriched community; it’s really diverse,” Hernandez said. “There are a lot of Hispanic kids here, and since they are born, they’re playing soccer. It’s in their blood. Their parents played, now the kids are playing. It’s something that’s really in their blood.”

This current group embodies that, having fallen in love with the game in its purest form.

“I remember back then, I was like in elementary school, we had a street we lived by and my brother would take me out with his friends and we would play,” Torres said. “That’s where they taught me to play soccer and stuff, where I got better. I would fall down but get back up. A lot of older guys would play with us. It wasn’t a really big area, but that really helped us out; we got more technical.”

Those skills have been refined over the years in more organized settings, and while those who have been around this current group could see special things on the horizon, this past year’s run came quicker than many anticipated.

“It was really a surprise for us to make it that far,” Galiana said.

The run ended with a 7-1 loss against Bloomfield Hills Cranbrook Kingswood, but it offered some valuable experience and lessons for the young Spartans, including the need to capitalize on what has been their greatest strength – their experience together.

“We definitely learned that we still need a lot of work, and that we still have a lot to learn, too,” Galiana said. “We need to play better as a team. We weren’t playing as a team in that game. It was really tough.”

Adding teams such as Berkley and Rochester Adams to the schedule this year was a move to help prepare for another postseason run. The Spartans have also moved from Division 2 back to Division 3, as they are no longer in a co-op with neighboring Dryden.

They’re hoping those experiences and adjustments can lead to the breakthrough they’ve been looking for since those days of having fun on empty lots.

“Since we were little kids we always dreamed of playing (for the high school team),” Galiana said. “We would go to high school games and see how they were playing, so it’s just really exciting to get out there. (Winning a Regional) would be my dream, honestly. Even states. But first, we have to get to Regionals.”