DETROIT – Few equate competitive soccer with teams from Detroit, especially those in the Detroit Public School League. And that’s just fine with Detroit Western coach Forest Farmer and his players.

Being an underdog can work to one’s advantage.

Western is one of two schools in the PSL (Detroit Cass Tech is the other) that sponsors a boys soccer team that competes in the MHSAA Playoffs. Western’s program had its beginnings during the 2002-03 school year, and last season the Cowboys came of age.

Western won the school’s first District title in the sport by defeating Dearborn Fordson, 7-1, in the final. The Cowboys had opened tournament play by downing Wyandotte Roosevelt, 6-1, and then defeating, U-D Jesuit, 2-1 in a shootout, in the District Semifinal.

Western lost to Detroit Catholic Central, 3-0, in a Regional Semifinal, and the Shamrocks went on to win the Division 1 championship.

Since the MHSAA began sponsoring the boys soccer tournament in 1982, all but three Class A/Division 1 championships have been won by public schools in suburban Detroit or more recently Grand Rapids, or by members of the Detroit Catholic League.

“We basically play whoever we can,” said the 50-year-old Farmer, who’s now in his sixth season as Western’s head coach. “We’re able to schedule 13 to 14 games while others play 18 or so. We’re not in a league. We’d like to get into a league.”

Farmer said he’s grateful for programs like those from Birmingham Seaholm and Birmingham Brother Rice that annually schedule Western. By playing these established programs, the Cowboys are able to gauge where they are as a team and better prepare for the MHSAA tournament.

Farmer jumped at the opportunity to coach at Western. He played soccer at Rochester Adams and dabbled in coaching other sports, like baseball and football, before he returned to soccer. He said initially he had difficulty convincing students to participate. But once they bought into what he was trying to teach, the numbers started to increase.

Western doesn’t have a freshman or a junior varsity team, but there are 22 athletes in the program. Sure, Farmer would love to have a sub-varsity team help feed the varsity. But the silver lining is he is able to coach his players all four years of their high school careers.

“I’m tough on them. All of the kids want to learn, and they know what to expect,” he said. “And the parents love it. I get tremendous support. Here, I get to run the team like I want to. It’s old school.” 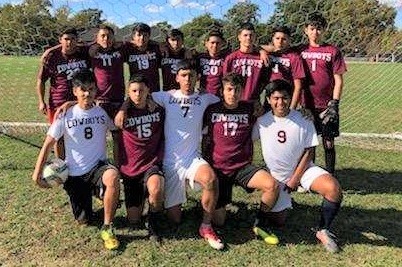 A handful of Farmer’s players have gone on to play in college, including Dylan Borzcak, a sophomore midfielder at Oakland University. Generally, Farmer will encourage his players to go to college, first and foremost. Then, if they do plan on playing soccer, he often suggests somewhere like nearby Schoolcraft College to get their feet wet – as Borzcak did before transferring to Oakland.

Steve Sanchez, 17, is one of four seniors on Western’s team. Not only has soccer been his main sport throughout his life, but he’s never played anything else. Even so, Sanchez, a defender, does not plan on playing soccer in college. He has a 3.5 grade-point average and is planning on majoring in engineering.

“My family has always been a soccer family,” he said. “My dad (Paramon Sanchez) played soccer when he was younger, and I grew up watching my brother, Paramount, play (at Western).

“This year our team is a work in progress. We lost eight seniors off of last year’s team but, yeah, we’re getting better. There’s no one individual who can outperform anyone else, so we’re all competing.”

“I pretty much like everything about the sport,” Angel Magana said. “I like scoring. This is the first year I’m playing striker, and I try to make the effort to score. I was a center mid last year and scored two goals. This year I’ve got 10.

“Winning the District was a great feeling. Underdogs? For sure. All of the Catholic schools and the others see us that way. I definitely consider ourselves as the underdogs. I like to have others feel that way. It’s great to show that we can play with them.”

Tom Markowski is a contributing writer for the State Champs! Sports Network. He previously covered primarily high school sports for the The Detroit News from 1984-2014, focusing on the Detroit area and contributing to statewide coverage of football and basketball. Contact him at tmarkowski@statechampsnetwork.com with story ideas for Oakland, Macomb and Wayne counties.