Unfortunately, that’s Shaban’s current role after suffering an ankle injury two weeks ago during a game against Zeeland West.

Shaban was diagnosed with a high ankle sprain and has missed the last four games for the reigning Division 3 champion.

The top-ranked Crusaders have remained unbeaten (8-0-4) in his absence, but coach Randy Heethuis is looking forward to having his returning all-state Dream Team player back in the fold.

“It’s been a bummer, and we are a completely different team without him, but hopefully we can get him back very soon,” Heethuis said. “Hopefully when he is able to get back out there he can pick up where he left off, because he was having a tremendous season up until getting hurt.”

Shaban is Unity’s top goal scorer, and has been every year since arriving on the high school scene.

The 17-year-old scored 20 goals as a freshman and followed that up with 22 goals and 10 assists as a sophomore.

Last season, he notched 31 goals and 21 assists while helping spark Unity to a Division 3 title. He already had tallied 12 goals and nine assists this season.

Shaban’s penchant for finding the back of the net was apparent from the onset.

“When he came in as a freshman at our opening tryout, he very much made his presence known and showed he had a knack for scoring,” Heethuis said. “He is one of those kids who thoroughly loves soccer and he has continued to progress, continued to get better and continued to work on his game.”

Shaban’s four-year stint on the varsity has been rare in the school’s boys program, and his 85 career goals are the most in school history.

And while he has blossomed into a prolific goal scorer, Shaban said it didn’t begin that way. 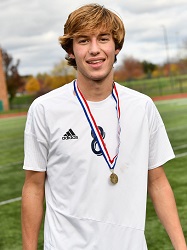 “Actually, I started out as a defender on my first club team,” he said. “And I remember scoring my first ever goal in U-9 with my knee. I remember that to this day.

“I did not start out as a goal scorer, but then I ended up moving up through the positions and then by U-13 I was the goal scorer. I think it’s the best feeling there is to be able to score, and every game I want to try and score.”

Two of Shaban’s biggest tallies came last fall when he had a pair in a thrilling 3-1 overtime win over Grosse Ile in the Final. The title was Unity’s fifth.

“It was my third year of trying to get one and to finally get it was fun, especially doing it with all of my friends,” Shaban said.

Shaban has verbally committed to sign with Michigan State and will be one of only four or five players from Unity who will have gone on to play Division I soccer, according to Heethuis.

Shaban’s competitive nature has been compared to former Unity star Jared Timmer, who went on to play at Butler.

“Both of them are very competitive and love the game of soccer,” Heethuis said. “Two very special players, but yet different types of players on the field.

“Kadin is smaller than Jared was, but he’s got quick feet and he’s very shifty. He is a difference-maker on the field, and anytime he gets the ball he is a threat to score. The opposition, when he gets the ball, you hold your breath like, OK, what’s going to happen next?”

Shaban’s passion for soccer came from his father, Talal.

“He was born in Nigeria and grew up overseas,” Shaban said. “He was over there in Lebanon, and it’s a whole different sporting world because soccer has always been big there.

“When he came here he instilled that in me when I was young, and him and I just love the game and we watch it. The teams we follow are rivals so that makes it pretty interesting, and he’s coached me all the way through.”

Shaban hopes for a return to the field next week and is determined to help the Crusaders in their bid to end this season on a high note.

“We’ve had a couple shaky games in conference play, but we’re hoping to turn it around come tournament time and go all the way,” Shaban said. “That’s the dream, to go back-to-back.”