NOVI – Zero was the hero.

Goorman was spectacular when the scoreless game went to penalty kicks.

After allowing a goal to Matthew Summers, he stoned Stewart Smith, Sheikh Manneh, Will Nicholson and Nolan Ondersma to set off a wild celebration by the Warriors.

“I kind of just read them,’’ said Goorman. “If they’re straight on, they’re going to push the ball to the right. I just do my best. I’m just overwhelmed with excitement. I just try to save every single one. That’s my mindset. I was trying to give my team the best shot to win.’’

The winning goal was scored by Isaac VanHoeven, who broke the 1-1 shootout tie after teammates Brevin Byrne and Charlie Alfree were stopped trying to follow up on Brandon Fles’ goal on the team’s first attempt.

“This is unreal,’’ said VanHoeven. “I’m not going to lie; I put it to God. I have no clue where the ball was going. I thought right, I looked left. I thought I was going to go right. I ended up going a bit more central than I expected. We take those.

“Jameson is an unbelievable player. When you talk about top goal keepers, his name has to be up there. He’s just unreal.’’

“Was Jamo big or what? He is amazing,’’ said Warriors coach David Hulings. “I’ll tell you a story. People wanted me to talk to him about being intimidating in the box, and I said: ‘You know what? You don’t talk to Jamo. He just knows what he’s doing.’

“He just has a sense about him. We’re not here without those kinds of saves. Brandon (Fles) shut those forwards down and Jake Betten in the middle, but he (Goorman) made great saves at the end of the second half. That’s not me; that’s his DNA and his parents.’’ 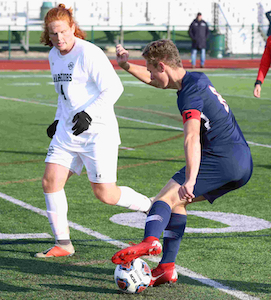 Long before these student-athletes were born, University Liggett and Western Michigan Christian were battling for state soccer supremacy in Division 4 and formerly Class D.

The two schools renewed the rivalry Saturday afternoon at Novi.

The two schools last played each other in a Final in 1999, with the Knights prevailing 4-2. In 1982, the Knights beat the Warriors 2-1 for their first soccer championship.

Speedy forwards Sheikh Manneh and Stewart Smith made an immediate impact against the Warriors’ defense, racing past defenders to put pressure on. Manneh was hurt during the second half of overtime and had to leave the game.

Western Michigan had a golden opportunity to score early, but Michael Masumpa’s shot hit the post and bounded away with just under 13 minutes left in the first half.

Action started picking up during the last eight minutes of regulation as both sides upped the energy offensively. Late in the second half, Masumpa made a dash to the net, but was blocked by a Liggett defender, potentially saving the game.

Doug Wood also had a shot on goal that would’ve been a game-winner had it not hit the post. Masumpa had a chance to win the game late in overtime, but got his feet tangled and missed the shot.

Liggett junior keeper Sam Sword, like Goorman for WMC, had nine saves not counting his stops during the shootout.

“They get to lift the trophy, but I couldn’t be more proud of how we represented ourselves,’’ said Liggett coach David Dwaihy. “It’s a really good thing to feel and deal with and move on from.''