HOLLAND – In a matter of minutes, Holland West Ottawa senior Khadin Soto’s disappointment of placing second in the breaststroke was replaced by the euphoria of clinching his school’s first MHSAA Lower Peninsula Division 1 swimming & diving championship.

Swimming the anchor leg of the 400-yard freestyle relay, Soto touched the wall a mere six hundredths of a second before Detroit Catholic Central’s anchorman, giving West Ottawa the race win and the overall team title – its first in any division in nearly 50 years.

Soto and his relay teammates Jamahl Hogan, Sam Smith and Derek Maas turned in a time of 3:05.84, edging the Catholic Central team of Matthew Kozma, Bennett Loniewski, Mario McDonald and Conor Brownell. The win proved to be the difference maker as the meet came down to the final race with West Ottawa totaling 248 points to edge Detroit Catholic Central’s 240.

“I knew the meet was within a few points, and I knew we had to win that race,” said Soto. “I knew I had to beat the guy next to me and I knew he was really fast. Since I didn’t win the 100 breaststroke like I thought I would, I just kept telling myself that I can’t get caught up in everything else. I just need to do what my teammates need me to do. Just swim like we have been all year. For the last lap I was telling myself I can’t be the one that loses it for everyone.”

That determination paid off as Soto’s finishing kick was enough to give the Panthers the win and wash away Soto’s disappointment.

“I was just super excited,” Soto said. “Before I looked up at the board, I kind of had this feeling that we won. Then just seeing it, I was overwhelmed with emotions. It was like the perfect ending.”

Soto had little time to prepare for his crucial swim as he placed second in the breaststroke, which took place before the 400-yard relay.

“Khadin was coming out of the breaststroke, so he was coming right off of a swim,” said West Ottawa coach Steve Bowyer. “We were hoping to give him a little bit of a lead. He didn’t have much of a lead, but he battled back there at the end.”

West Ottawa had finished second in 2018, as it just missed its first Finals title since winning three straight in Class B-C-D from 1969-71. Detroit Catholic Central was swimming for its first Finals championship in this sport and came on strong down the stretch.

“Detroit Catholic Central had an unbelievable meet,” Bowyer said. “They fought really hard today. We had about 14 points on them after prelims. They came back and fought hard today and brought it right down to the last relay. They don’t get any closer than six hundredths of a second. We feel very fortunate to be on the winning end of that relay.”

Soto is part of a memorable senior class that fueled the Panthers’ drive to the title. Derek Maas is the headliner of West Ottawa’s senior class. Along with swimming a leg of the 400 relay and the winning 200 medley relay, Maas also captured a pair of individual titles. Heading to the University of Alabama next season, Maas won the 200 IM and the butterfly. Having talented teammates to train with has been a key to his success. 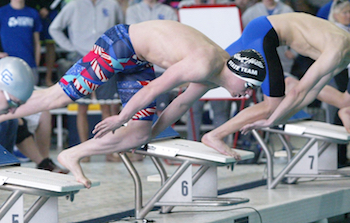 “It all starts at our practices,” Maas said. “I always have my teammates with me. It’s way easier to train hard with guys around you that are pushing you. It’s awesome to go out like this as a senior, especially with how the season has gone with the team. Winning the state team title was the ultimate goal.”

Maas teamed up with Soto, junior Gavin Temple and his younger brother, freshman Kevin Maas, to win the 200 medley relay. A versatile swimmer whose main event at the college level will be the 200 breaststroke, Maas won the Division 2 title in the 100 backstroke last year.

“Being a versatile swimmer has helped me,” Maas said. “I have three of the four strokes down pretty good.”

Maas was not the lone dual winner at the Finals as Grand Rapids Forest Hills Central senior Henry Schutte capped his high school career by winning both the 50 and 100 freestyles.

Schutte closed out his prep career as a six-time Finals champion. Schutte won the 50 and 100 freestyles as both a sophomore and junior. He credited his fellow competitors from around the state for helping him achieve success during his high school career.

“It’s been a blast,” Schutte said. “The past three or four years it’s been awesome to be a part of such a great group of athletes. My competitors have everything to do with that. We push ourselves to be the best, and it’s such a great atmosphere. I love it.”

Ann Arbor Skyline senior diver William Henry Schirmer closed out his career as a three-time champion. Schirmer won this time by almost 100 points as he totaled 514.55.

Schirmer, who will dive at Northwestern University, said he felt little pressure in going for the three-peat this season.

“I came in wanting to have a lot of fun with it,” Schirmer said. “It’s my senior year, and I just relaxed and focused on doing what I know I can do. I wanted to stay consistent and have fun with it. It’s my last time being at the state meet, and it’s a great feeling being here with my teammates.”

In the 200-freestyle relay, the Harrison-Farmington team of Tristan Strasberger, Trevor Jones, Jared Visser and Brody Jamieson took first place in a time of 1:25.24.