Last year was still fresh in the minds of the Cranes after a runner-up finish to East Grand Rapids by only four points.

It provided the perfect incentive, and Cranbrook-Kingswood avenged that loss while capturing the program’s first MHSAA title.

The Cranes scored 297 points to win the Finals in a competitive race among a handful of teams.

“This carries over from last year with our four-point loss,” Cranbrook-Kingswood coach Karl Hodgson said. “These guys have done nothing but talk about that, and they’ve been thinking about that for basically 12 months. The motivation factor was all probably done on them, and I didn’t have to do a whole lot with that part. But I couldn’t be happier with their performance in the water.”

Cranes co-captain and senior Ben Schneider said the team was determined to improve upon last year and make school history.

“I think we knew from last year that we definitely had what it took to get it, and that was on our minds from the first day of practice and every practice since then,” he said. “We’ve had our eyes on the prize and we finally got it.”

Nate Tattrie, also a senior and co-captain, was thrilled with the team’s push toward a goal that didn’t seem possible a short while ago.

“This feels excellent,” Tattrie said. “Four years ago we would not imagine that we would be here. It’s amazing, and everyone worked really hard over the summer so we knew coming in that we had a good chance.”

The Cranes opened the meet with a win in the 200 medley relay behind the foursome of Mitch Buccalo, Giorgio DeGrosso, Andrew Guan and Frankie Misra.

“The biggest key was winning the medley,” Hodgson said. “I knew we had a shot at it, and that sort of set the tone for the rest of the day. The rest of it took care of itself, and we knew it was going to be close going in with about four or five teams. All I wanted them to do was swim fast Friday to put us in position today. That’s what we did.”

Chelsea’s finish was the highest in school history. It took third in 1996 and fifth a year ago.

“We did the best we could in prelims and got enough kids in position where they could score,” Chelsea coach Dave Jolly said. “I laid out a formula (Friday) night and the kids bought into it. I knew we had to come ready to go today, and there were a few trials and tribulations. But we came out really successful.” 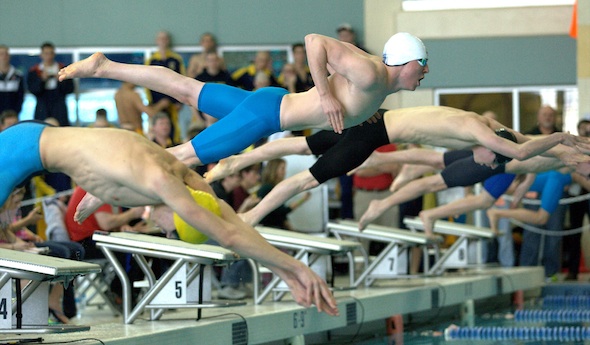 “They brought their “A” game, and success breeds success,” Jolly said. “We just kept clicking and clicking, and at the end we got the first runner-up finish in the history of our program.”

Holland Christian senior Parker Cook-Weeks duplicated his success from a year ago with wins in the 200 and 500 freestyles, both times defeating rival Kurt Swieter of East Grand Rapids. Cook-Weeks clocked a 1:38.95 in the 200 and 4:36.61 in the 500.

“It had to be the most fun thing I’ve ever had in my career,” Cook-Weeks said. “Me and Kurt go back a long time ago, to age group swimming, and it has always been a battle. Defending my title against him was fun, and it was a fun run for my last year here.”

Cook-Weeks has committed to swim at Olivet Nazarene next season.

The biggest buzz from the meet came at the conclusion of the 200 freestyle relay.

“I’ve been swimming and coaching for too many years than I would like to admit, but I’ve never ever seen three relays tie it up and then to have 12 individual swims and come out to the hundredth,” Jolly said. “That’s insane, and it was perfect to have those quality of kids all on the stand together. It says a lot about our division. It was a great meet.”

Hodgson thought there was a problem with the clock.

“I thought it was a malfunction on the board,” he said. “I have been coaching high school swimming for about 30 years and that’s a first. It was kind of cool, and the people around me had ever seen it before, too.”

Milan senior Oliver Smith was the lone record-setter at this season's meet, doing so in the 50 freestyle with a time of 20.78.