Found lurking in the shadows of Division 1 and Division 2 state powerhouses such as Birmingham Brother Rice and Birmingham Seaholm, plus a host of other highly-regarded programs nearby, the Cranes have found state-meet success in Division 3.

“Swimming in Oakland County — we don’t win the county meet. But once we leave the county, we realize that we can swim with anybody in (Division 3),” offered Cranbrook Kingswood coach Karl Hodgson. “There are so many good teams there (in the county). It really does help prepare you for the state meet.”

A total of 32 schools reached the scoring column.

Cranbrook Kingswood landed finishers in 27 of the 192 total slots over the 12 events, including four top-16 placers in both the 100-yard breaststroke and 500 freestyle, which helped the Cranes take a lead they would not relinquish.

“I knew (depth) would be our only shot,” Hodgson admitted. “I knew EGR had the studs, and they sure proved that today, didn’t they? I tip my hat to them and their coach. They did a great job with (winning eight events). That’s what it came down to. But so did we. We swam so great (Friday) to put us in position. Really out of our minds. To duplicate it, I knew it would be tough. But the guys sucked it up and got it done.”

Cranbrook only won a single event, as senior Giorgio DelGrasso touched first in the 100 breaststroke in an LP Division 3 meet record time of 55.92. Cranbrook won in a landslide last season (430-299.5 over Chelsea), but had stiffer challenges this year, much like 2014 when the Cranes edged Chelsea (297-273.33) 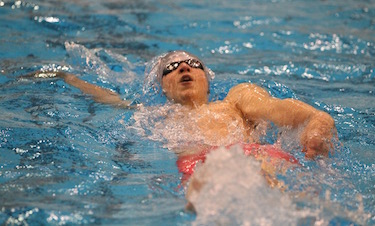 “It feels really good, especially my senior year and (the fact) that it was my last high school race,” said DelGrasso. “But this is not about me. This is about my coaches and my teammates.”

“We knew it was going to be a good race because Christian Bart is a heck of a swimmer,” smiled Hodgson, who was dumped into the pool in celebration moments earlier. “But Giorgio wanted to break 56 (seconds) all year, and it was his last shot. He came through. That was good; we needed that hit. You could see the breaststroke was a big event for us; we had four guys there in the top eight. That was a big plus for us.”

East Grand Rapids won eight of the 12 events, including four of the first five in opening up a 125-122 lead.

The Pioneers have won more 100 MHSAA team titles across all sports, with more than 50 runner-up finishes going back to the 1920s — making East Grand Rapids one of the most storied high schools in MHSAA lore in terms of overall postseason success. But this time, a disqualification hurt the Pioneers’ chances.

“We swam great overall today in the finals,” said veteran East Grand Rapids coach Butch Briggs. “We had a lot of wins. But what I am really proud of is the way we bounced back. We were resilient. We were disqualified Friday in the 200 medley relay and lost those points. That was the first event. But we didn’t let it get to us. Instead, we came back and swam great in the finals.”

“I didn’t put too much pressure on myself,” said MacGregor. “I went 1:40 in the prelims (of the 200 free) and I wanted to shave a few one-hundredths (of a second) and get down in the 1:39s. I wanted to swim faster on the final day and was able to accomplish that.”

Sophomore Christian Bart placed in four events (two individual and as part of two relays), including a win in the 200 individual medley (1:50.61). 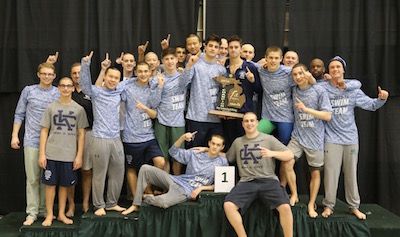 “I think, being a sophomore, this is a great accomplishment for me. I didn’t expect it,” said Bart, who was a part of the Pioneers team last season that finished third. “Our goal was to have our best meet, go out there and swim the best we can. We were better than last year. We were third last year and second this year. We hope to contend next (season).”

Bart, Hein, MacGregor and Cade Vruggink teamed up for a win in the 200 freestyle relay (1:23.02), setting another meet record.

“We stacked this relay with our fastest swimmers,” smiled Hein. “We really wanted to win that event.”

In the final event, Vruggink, Christopher Steers, Joe Murphy and MacGregor joined forces for a 3:10.40 effort in the 400 freestyle relay for the Pioneers’ eighth win of the day.

“I knew it would be close,” said Hein. “I really had to push. It feels great beating (the reigning champ).”

Chelsea, second as a team a year ago, pulled the first upset of the day. The Bulldogs stunned top-seeded Cranbrook in the 200 medley relay, as anchor Joey Manger used a strong kick to help his unit prevail with a 1:34.56 clocking.

“I knew that Joey Mangner is one of the best sprinters in the state and that he would catch him,” said Zach Lee. “We all did our part, and Joey finished it.”

Holland Christian sophomore Skyler Cook-Weeks finished second in the 500 freestyle as a freshman and overpowered the pack this year to post a 4:31.48 effort, also a meet record.

Grand Rapids Catholic Central senior Joey Puglessi set the LP Division 3 Finals record in the prelims Friday in the 100 backstroke (49.89) and repeated as champion in the event Saturday with a 50.07 clocking.

“It feels great to get the record and defend my title,” said Puglessi, who has signed to swim at the University of Buffalo. “You always want to go out with a (great effort) at your last high school meet.”