UNIVERSITY CENTER – Mike McHugh was floating on his back in the Saginaw Valley State University pool Saturday afternoon, water soaking his clothes and a smile covering his face.

The Dexter coach, who had spent the previous four hours wearing out his shoes walking the pool’s deck, could now relax as his Dreadnaughts had won the Lower Peninsula Division 2 boys swimming and diving championship.

Behind championship swims in the 200-yard freestyle and 100 backstroke by senior Rob Zofchak, and 13 total top-eight finishes, Dexter finished with a meet-best 284 points. Warren DeLaSalle was second with 266, two-time reigning champion Birmingham Seaholm was third with 211 and Battle Creek Lakeview was fourth with 205. 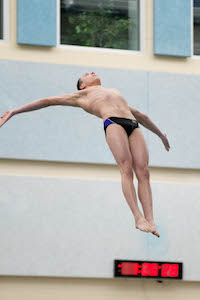 “We knew coming in we had to build up a lead,” McHugh said. “DeLaSalle’s really good in the back and breast(stroke). We’re really good in the 200 (freestyle), 500 and (individual medley). We knew we had to go big, and having seven top-eight swims in those three events was huge. I had three seniors make top eight in the 200 free (Zofchak, Matt Bergdolt who was second, and David Merz who was eighth). That’s the leadership we’ve got. Three senior leaders, two of them captains, just doing everything they can.”

Dexter still had work to do in the final race of the meet, although it wasn’t much. If DeLaSalle didn’t win the 400 freestyle relay, all the Dreadnaughts needed to win the meet were to not get disqualified in the race. They finished second, one spot ahead of the Pilots. Fittingly, it was Zofchak who swam the final leg of the relay.

“It’s something special,” Zofchak said. “You feel great. Even though you’re swimming hard, you’re going as hard as you can and you’re really tired, you still feel great. Like, ‘Wow. There’s not much I can do right now to mess this up.’”

“I swam pretty well,” he said. “There’s definitely things I can improve on, and I’ll keep working on those, but in general I’m pretty proud of my swims.”

Montague won the 200 individual medley and 100 breaststroke with LP Division 2 meet records of 1:47.4 and 53.93, respectively. It was the second straight year he’d won MHSAA titles in those events.

As Montague swam to commanding leads in both races, spectators watched in awe, some even counting the number of times he came out of the water in the breaststroke and marveling at how infrequently he did so.

“My freshman year, I only qualified for one event at the state meet and I didn’t even make it to finals,” Montague said. “I never thought that I’d be able to compete at a level like this. These past couple years I’ve given everything I can in the pool, every practice, every day. I just give 100 percent, just trying to get better. When everything pays off in the end, it’s just a great feeling.”

Mork was also a repeat champion in both of his events. He won the 50 freestyle in 20.83 seconds, one hundredth of a second ahead of Seaholm’s Liam Little. Mork won the 100 in 45.43 seconds.

“I could kind of see that (Little) was close to me – I had no idea it was a hundredth of a second close,” Mork said. “I saw him gliding a little bit; that’s when I knew I had to get a good finish, and I touched him out. But then everybody started cheering and I thought, ‘Aw shoot, I lost.’

“Then I looked up and it was a hundredth of a second and I still won, so I’ll take it.”

Also repeating as champion was Seaholm diver Sebastian Fay, who won with 479.4 points. He had a commanding lead coming into the final dives, but didn’t rest on his laurels.

“It puts more (pressure) on me, because diving is a sport where anything can happen,” Fay said. “I try not to let the lead get in my head because then I’ll just relax. With that dive especially, that last dive, I need to go after it, and if I relax I’m going to screw it up.

“So honestly, I felt a little more nervous at the end. My heart was pounding pretty hard, so I had to calm down.”