YPSILANTI – There is more than one way to win an MHSAA Finals swimming & diving championship, and the Dexter boys proved it Saturday afternoon at the Michael H. Jones Natatorium on the campus of Eastern Michigan University.

The Dreadnaughts won the opening race – the 200-yard medley relay – and did not win another en route to their second consecutive Lower Peninsula Division 2 championship. A year ago, Dexter had Rob Zofchak win the 100 and 200 titles, and he combined with fellow senior Matt Bergdolt to lead the way.

“Last year, our top guys were really good,” senior captain Alex Janosi said. “Rob and Matt scored a lot of points for us, and this year everyone was scoring their own points, so it was more of a team effort than last year.”

Indeed. All 11 Dexter swimmers scored points as the Dreadnaughts totaled 284 to edge runner-up Ann Arbor Huron (256.5) and third-place Birmingham Seaholm (195.5). It was the fourth MHSAA championship in boys swimming & diving for Dexter and the first time it won back-to-back.

“We have been a depth team all year,” Dexter coach Michael McHugh said. “We don't have all-stars, but we have a lot of really good guys, and that's what won us the meet this year. Those numbers.”

Dexter started the meet in great shape as juniors Alex Shehab and Sam Krahn, sophomore Niklas Eberly and Janosi teamed up to win the medley in 1 minute, 34.42 seconds.

Janosi said that win and the performance in the prelims Friday set the stage for the championship.

“Coming into states, everyone is a little nervous and guys don't know what they can do,” he said. “So to come out and do well in the first day and then win the first event really showed that all of our training paid off, and we could go for it and have fun and win a championship.”

Despite the opening win, Dexter did not lead from start to finish. Huron made an early move and led by 13.5 points after seven events, but McHugh was not too concerned.

“We knew we had to weather the storm early,” he said. “Our big event is the 500 – it has been for years – and we had five guys score in it. That's kind of where we took over, and we knew we had a shot. As long as we were mistake-free, we would win at that point.”

The 500 freestyle – the eighth event - was the perfect showcase for Dexter's depth. The Dreadnaughts did not have a swimmer finish in the top four, but Janosi was fifth, Mitchell Houghtaling sixth, Andrew Golin seventh, Casey Dolen 10th and Sam Latshaw 13th.

Huron did not score in the event as Dexter erased the 13.5-point deficit and turned it into a 191-153.5 lead that it never relinquished.

Eberly had the best individual meet for Dexter. In addition to swimming on the winning 200 medley relay, he was on the second-place 400 freestyle relay and added second-place finishes in the 200 freestyle and 100 butterfly. He completed his first season swimming for Dexter after transferring from Pinckney.

He said he felt a little bit of apprehension joining a new team at a new school, but it vanished quickly.

“You always feel that way when you join a team, but this team fits me really well,” Eberly said. “We're like brothers. All of us. I started training with them, and they accepted me right away, and I loved them from day one.”

Janosi is the inspirational leader of the team who also contributes a lot in the water. He swam the last leg in the winning 200 medley relay and the runner-up 400 freestyle relay and added fourth-place finishes in the 200 IM and the 500 freestyle.

But what he brings to the team with his leadership skills might be as important as his swimming.

It is a role embraced by Janosi.

“I really enjoy it,” he said. “I like being a leader on the team. We have a really talented group, but sometimes they're nervous or a little shaky, and I like to keep them going and pump them up because I know they have the talent. It's just great to see all that turn into a state championship.”

Shehab, who swam the opening leg on the winning medley relay, also took fourth in the 100 backstroke and 12th in the IM.

Dexter had Will Blodgett, Stephen Sterlitz, Kevin Kimmel and Dolen take third in the 200 freestyle relay, and each of them scored in other individual events in another showing of its depth. 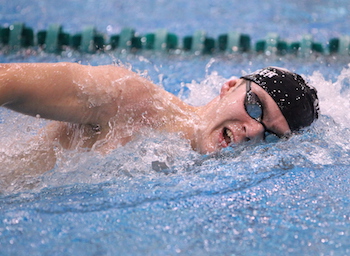 It all added up to a convincing MHSAA championship over an impressive Huron team that finished second.

“I'd like to congratulate Huron; they had really good swims,” Janosi said. “Their top guys were really good and scored a lot of points, but our depth is what won the championship. Everyone was scoring, and it really added up.”

Huron was led by senior Noah Frassrand, who finally bagged his first individual Finals championship by winning the 100 backstroke in the second-to-last event. He had finished second in the IM and also swam the first leg on the 200 freestyle relay team that finished second.

“It's been one of the most competitive meets I've ever been to, and it's been really exciting to race all these people,” he said. “It is always tiring, and it was difficult for me, but racing makes me feel alive. It's what I love to do.

“We had such a great meet, and it was really great to be here.”

It was a great meet despite a few things: No division or meet records were broken, and there were no repeat champions in any event except the 200 freestyle relay, where Birmingham Seaholm had two of its four swimmers back from its winning team from a year ago to finish first in 1:25.74. The foursome featured Michael Arpasi and Ryan Lawrence from last year's winning relay and Joe Girdler and Noah Grout.

In addition to his spot on the 200 freestyle relay team, Lawrence, a senior, won the 50 freestyle (20.55 seconds) and 100 freestyle (44.94). Although he had been on two winning relay teams last year and one this year, the 50 and 100 were his first individual championships. A year ago, he was runner-up in the 100 freestyle.

“It was everything that I have worked for in those four years to finally come to fruition,” he said. “It's just an awesome experience.”

Arpasi, a junior, also had a championship in the 100 butterfly in 50.24 seconds.

Amid the dynamic depth of Dexter and the laurels for Lawrence, a star emerged in Fraser freshman Alexander Capizzo, who at 15 isn't old enough to drive but was old enough to swim to titles in both the IM In 1:50.21 and the 500 freestyle in 4:29.06. He passed defending state champion Graham Miotke of Rochester Adams in the final 50 yards to win the 500.

Capizzo and Miotke were two lanes apart, but that was close enough for Capizzo to keep a close watch on his top opponent, who led most of the way.

Capizzo said he did not feel intimidated by his first experience at the Finals meet.

“I just told myself that I belonged here like everyone else,” he said. “It feels amazing. I couldn't ask for more.

“I was definitely very nervous, and they went away as fast as I hit the water. Then I just got in and did what I usually do. That time in the 500 beats my personal best from Friday in prelims by two seconds.”

“That's kind of a lot,” he said of the first-day lead, “so I figured I'd just come out and dig deep and have fun. Me, Ryan and Chris, we had been joking around the whole season saying that we're the best in the state, and that's how it finished out. We didn't know how it would line up. I guess I just wanted it more.”

Youmans had a healthy lead going into his final dive – a back 1.5 somersault with a 1.5 twist. That dive carries a 2.5 degree of difficulty, and he hit it for 50 points.

“Earlier in the season I was hitting that dive, and three meets in a row I did over 60 points, so all I was thinking was to hit it as good as I could and go for the win,” he said. “It's absolutely amazing. The adrenaline rush is still going strong 45 minutes later.”

Other champions included Portage Central sophomore Owen Miller in the 200 freestyle (1:40.30) and Warren DeLaSalle junior Zach Milke in the 100 backstroke (50.40).

However, standing tall above all the individual event champions were the depth-filled Dexter Dreadnaughts with their third team championship in five years.

“These guys are unbelievable and worked their tails off the past two years to accomplish what nobody in Dexter has done before,” said McHugh.

After accepting the championship trophy, McHugh turned to his team and said, “Let's go for a swim, boys.” Coaches and swimmers jumped into the pool, and it sort of allowed McHugh to go full circle in his career.

“This was the first time I swam in this pool since I was in college,” said McHugh, who swam for Bowling Green State University. “My last MAC (Mid-American Conference) meet was right here.”

Now, he has an MHSAA Finals championship in that pool, too.