YPSILANTI – It was only fitting that Casey Dolen was the last swimmer in the pool for Dexter on Saturday at the MHSAA Lower Peninsula Division 2 Boys Swimming & Diving Finals at Eastern Michigan University.

Dolen was the first to touch the wall in the 400-yard freestyle relay, helping his team win the event and lock down the program’s fourth straight Division 2 championship. He, along with senior Niklas Eberly and sophomores Michael Baumann and Clayton Kinnard, finished in a time of 3:06.84, comfortably beating out runner-up Birmingham Groves – which finished second overall in the team standings.

“This is a great group of kids, and to send these seniors out with four in a row is really special,” said Dexter head coach Michael McHugh, whose program has won five Finals titles since the 2012 season. “That’s our goal all year, but we never take anything for granted.

“The guys really stepped up. We knew Groves was going to come out strong. Our job was to not panic, not overreact and keep doing what we were doing. We knew we had a little bit of a lead (entering Saturday), so as long as we were mistake-free, we’d be OK.”

Groves did indeed come out strong. The Falcons quartet of senior David Helton, juniors Nolan Kamoo and Jackson Gugni and senior Hunter Reilly upended Dexter’s top-seeded 200 medley relay team to start the meet. Their time of 1:34.70 was the best of the weekend and gave their team an early six-point lead over the Dreadnaughts.

But it didn’t take long for Dexter to make its move. A runner-up finish by Dolen in the 200 freestyle helped cut Groves’ lead to three points – and it seemed to get the ball rolling for the Dreadnaughts.

Kinnard’s eighth-place finish in the next race, the 200 individual medley, gave his team an eight-point lead, one which it would not relinquish the rest of the day.

Eberly was the star of the meet for Dexter. He won both the 50 freestyle and 100 butterfly events. His 20.40 seconds in the 50 matched his preliminary time and beat runner-up Luke Lezotte of Midland Dow by a tenth of a second.

His time of 47.79 in the 100 butterfly helped him repeat in the event. Walled Lake Northern’s Zane Rosely was a distant second, with a time of 49.94. 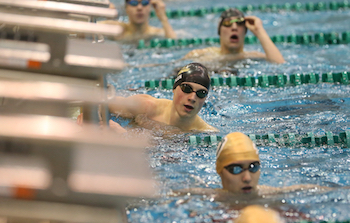 “It was definitely a goal of mine, since I started high school, to break 47,” Eberly said. “You don’t see a lot of high schoolers do it. It really sets you up well going into college like that. I knew I could do 47.5 if I really tried. I fell a little bit short, but I’m unbelievably happy with 47.7. I think it’s a phenomenal time.”

Eberly was one of the top swimmers entering the finals and knew he needed to swim up to those high expectations if his team was to have a chance to four-peat.

“I was super happy to be able to hold my places and help the team,” he said. “My situation is definitely different than other kids’. A lot of them have to step up, climb up, maybe they’re seeded eighth or 16th and they have no place to go but up. Going into states, I have nowhere to go but down. So it really adds a lot of pressure.”

Joining Eberly as a two-event winner was Fraser junior Alex Capizzo, who was victorious in both the 200 IM and 500 freestyle, a pair of events he also won a year ago. He beat out Rosely in the IM and Walled Lake Western junior Eric Hieber in the 500.

Hieber easily won the 200 freestyle, beating out Dolen by more than 1½ seconds.

Dolen did pick up an individual title, narrowly edging Lezotte by two hundredths of a second in the 100 freestyle.

Other individual winners included Jack Hamilton of Berkley, whose time of 50.51 in the backstroke helped him beat out runner-up Ben Conroy of Gibraltar Carlson by nearly a second. And Byron Center senior Jacob Glover bested the field in the 100 breaststroke, finishing in a winning time of 56.38

Groves, which finished third behind Dexter and Rochester Adams a year ago, is losing a few key seniors to graduation, but returns a good nucleus of athletes, which has head coach Ricky Forrest excited for what lies ahead for his team.

“(Dexter is) an experienced team, and I’ve got a lot of respect for what Mike does with his guys. Every single year, no matter where they’re at on the psych sheet, every team here knows that they’re going to bring it,” Forrest said. “We had an outstanding day during the prelims on Friday and a really good day (on Saturday). We’re going to be missing a lot of (senior) leadership and we’re going to need some boys to step up next year, but we’ve still got a really good core and I’m looking forward to the challenge.”

PHOTOS: (Top) Dexter senior Niklas Eberly swims the winning butterfly during Saturday’s Division 2 Finals at Eastern Michigan University. (Middle) Finishers in the 100 freestyle, including Dexter champion Casey Dolen, look to the scoreboard after their race. (Click for more from HighSchoolSportsScene.com.)