ROCHESTER – If ever a championship gave the winning team more feelings of relief than exuberance, such was the case for the Dexter boys swimming & diving team Saturday after winning its third straight Lower Peninsula Division 2 Finals.

Dexter was a favorite going into the meet at Oakland University, which made coach Mike McHugh uncomfortable.

“It’s never fun being the target,” McHugh said. “But we were able to overcome that and embrace that a little bit.”

Dexter sure did, capturing its third straight title by scoring a meet-best 241.5 points, 21.5 points ahead of runner-up Rochester Adams.

Birmingham Groves was third with a final total of 191, Warren DeLaSalle fourth at 190 and Birmingham Seaholm rounded out the top five with a score of 183.

Eberly finished runner-up in both events last year and was seeded only fifth in the 200 freestyle, but that didn’t deter him from going a step further than last year in both events.

“Basically, all season long I knew I wasn’t swimming my best,” Eberly said. “Pretty much today and yesterday, I just threw it down.”

Eberly also was the lead swimmer on Dexter’s team that won the 200 freestyle relay in a time of 1:24.95.

The other individual standouts of the meet were Warren DeLaSalle senior Zach Milke and Fraser sophomore Alexander Capizzo. 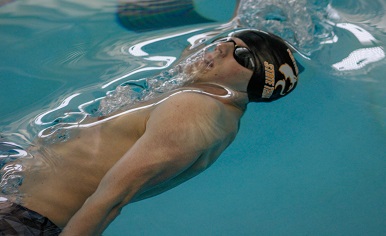 Milke won the 100 freestyle (44.97) and 100 backstroke (49.63) before finishing off his high school career in grand fashion as the anchor leg of DeLaSalle’s 400 freestyle relay team.

Entering the pool more than a second after the leader, Milke rallied and touched the wall first to give the Pilots the title with a time of 3:07.28.

“I knew it was going to be close, but it was my last meet with the boys and I had to make them proud,” Milke said. “I couldn’t have asked for a better day. In my hotel this morning, I was freaking out. But once I got here in my element, nothing could stop me.”

Capizzo also said this was his last high school meet, as he will swim exclusively with his club team during his junior and senior seasons, and that he will always cherish swimming for his high school team the last two years.

“All the people on my swim team were amazing,” Capizzo said. “They cheered me on, I cheered them on and they were always there when I needed them.”

The other individual winners were Birmingham Seaholm senior Michael Arpasi in the 50 freestyle (20.83), Okemos sophomore Hunter Hollenbeck in diving (503.15) and Grosse Pointe South senior Matthew Koueiter in the 100 breaststroke (56.71).