By Chris Stevens
Special for Second Half

Smeenge’s hair, his shirt and his shorts were all wet. Only championship coaches know that feeling.

“It’s a great feeling,” Smeenge said. “Between Cranbrook and East Rapids, they’re the perennial favorites, so it’s a good feeling (to win the title.)”

It was the first time Holland Christian’s boys had won a Finals swim title since 1989. Smeenge has led the Maroons to a pair of runner-up finishes during his time as coach, in 1990 and 2011.

And Saturday’s team finish topped it all off.

“It feels fantastic,” Cook-Weeks said moments after he and his teammates, along with their head coach, carried out the tradition of jumping into the pool to celebrate. “To go out my senior year by winning a state championship, you can’t ask for anything more than that. It just feels great to be able to do it with these guys. I’m going to miss being with them.” 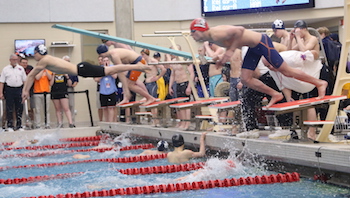 “His work ethic in the pool is just outstanding,” Smeenge said. “It drives everybody else. That’s the thing that I will think of and remember the most about him.”

Cook-Weeks also was part of the winning 200 and 400 relay teams. His teammates on the 200 team were Miskelley, junior Brad Windemuller and junior Jacob Heeres; and on the 400 team were Heeres, junior Riley VanMeter and senior Luke Mason.

“We wanted to go into the meet by doing the best that we could, and we came out the way we wanted to be,” Cook-Weeks said of the mindset that he and his teammates had entering the meet as the top-ranked team.

The Maroons’ Miskelley also turned in a stellar performance. He won a pair of individual titles, capturing the 200 individual medley in a meet record time of 1:49.58. He also placed first in the 100 backstroke in a meet-record time of 49.05 seconds.

“We obviously lose some big guns (to graduation) with Skylar, Ian and Luke,” Smeenge said. “But we’ve got a nice group of guys who are returning and who scored points for us. I don’t know if it’s going to be enough to win a state championship again, but we’re going to give it a shot.”

In other events, Christian Bart of East Grand Rapids won the 50 free in 20.31 seconds, breaking his previous meet record in the race. Nolan Briggs of Byron Center captured the 100 butterfly in 49.16 seconds, and Spring Lake’s Cam Peel placed first in the 100 free in a meet-record time of 44.97.