ROCHESTER – A blazing, record-breaking photo finish in the first race of the day set the tone for Holland High as the boys swimming and diving team went wire-to-wire in first place of the MHSAA Lower Peninsula Division 2 Finals on Saturday at Oakland University.

The Dutch opened the day edging eventual meet runner-up Ann Arbor Pioneer by two hundredths of a second for first in the 200-yard medley relay.

“That definitely set us off right,” Holland senior Derek Bosko said. “It just got us all going.”

“It just really set the right spot. Not only did it give us a cushion in points, but it really fired everybody up,” Holland coach Don Kimble said. “For them to go that fast is really something.”

The Dutch boys won their first MHSAA title since taking the LP Division 2 crown in 2007.

“We have a good system that works, and we have a bunch of good kids,” Kimble said. “They worked their butts off.”

Bosko said it’s been his teammates’ goal for years to finish first at the Finals.

“Since my freshman year, we’ve believed that we could do it. And just this year the whole team came together and really made it happen,” he said. “It’s awesome.”

While Holland never relinquished the lead throughout all 12 events, Pioneer pushed the Dutch all day.

“I knew Pioneer would be tough,” Kimble said. “When the team listings came out for divisions back in July, every boy I saw I warned about Pioneer. I know their ability, and I knew right away they were going to be trouble.”

“We knew today when we started the meet it was going to be tough,” Bosko added.

“The kids came together and had just great swims,” said Hill, who co-coaches the team with his wife Liz. “We came a long ways.”

Pioneer senior Chris Klein was proud of his teammates.

“I think we did a great job,” he said. “A lot of the guys had great times, and we’re really excited about it.” 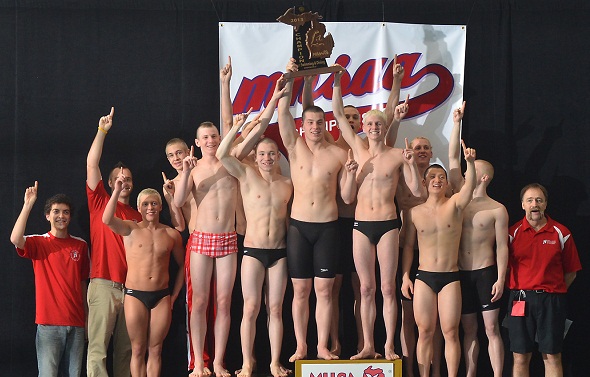 Klein, in addition to participating in the opening relay, anchored the Pioneers’ second-place 400 freestyle relay while grabbing a pair of first-place individual finishes in the 200 IM and 100 breaststroke. He also set a meet record in the breaststroke, and was honored as the Swimmer of the Meet.

“Chris has been so much fun, to watch him as a young ninth grader to grow into a real man. He’s going to Michigan next year, and he’s going to be a big part of that Michigan team,” Hill said. “But he has come so far through hard work and determination. It’s a pleasure to see that kind of stuff happen to young people.”

St. Johns senior Brennan LaBar emerged as the best diver, winning that competition with 365.20 points. He reclaimed the title he won in 2011 as a sophomore, after finished in second last year.

Holland would go on to win five other races on the day to continue its dominance and ensure the title. Kimble, who also coached the Dutch girls team to the Division 2 championship in the fall, joked that perhaps his girls are the only ones who can look down on his boys squad. The Holland girls have won two straight titles.

“The girls like the bragging rights because they have two in a row, so they have a little edge on the boys,” Kimble said. “The boys just take longer to develop this type of level of team. The girls have gotten used to reloading every year and coming back. The guys, we have to reload. And we have a big senior class this year, so we’ll see what happens next.”

But to Bosko and his teammates, all that matters is they went home with the trophy Saturday.

“It’s just expectations really of Holland swimming,” the Dutch senior said. “We’ve always had a tradition of getting a trophy, and really this year, it was all or nothing. It was first or nothing.”