MARQUETTE – For the past two years, the Houghton boys swimming & diving team has watched Marquette come out ahead of the Gremlins for the Upper Peninsula Finals championship.

On Saturday, the Gremlins finally finished on top, but it came down to the wire.

Trailing the Redmen by two points heading into the final event, the 400-yard freestyle relay, Houghton needed a strong performance if it wanted to end Marquette’s four-year title reign.

They got it as Houghton’s relay took first place, and as a team edged the Redmen 242-232. That was the only event the Gremlins won all day, and they picked the perfect time to do it.

“We were down two points, and I told the boys just give it everything you’ve got and they came through,” Houghton coach Erik Johnson said. “This feels pretty darn good. These kids worked really hard, and we only did it with nine guys. I’m really happy for our seniors to be able to send them out this way. It’s been a goal of theirs for a long time, and they were able to get it done.”

It was a tough outcome for the Redmen, who had won four events on the day – including the other two relays – and did so despite having a small roster. Matt Brauer (200 freestyle) and Ryan Glover (100 backstroke) were Marquette’s two individual winners. 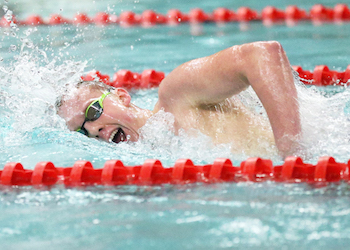 “Quite honestly, if you told me at the beginning of the year that our boys would get second, I would’ve said you’re crazy,” Marquette coach Nathan McFarren said. “We lost some amazing swimmers that I had for four solid years. The boys team gave it everything we had. We just didn’t have the depth when it came down to it. We won a lot. We swam hard. We worked hard and we had a great taper, but it wasn’t in the cards this year.”

Kingsford finished third in the eight-team meet with 192 points, with Caleb Plumley winning the 200 individual medley and the 100 backstroke. Sault Ste. Marie took fourth at 182 and Gladstone fifth at 176. The Blue Devils took first in four events with Leevi Olson (50 free and 100 free) and Andrew Innerebner (500 free, 100 butterfly) both winning twice.

“All our kids had top times, and even our role kids stepped up,” Sault Ste. Marie coach Steve Habusta said. “If you would’ve told me where we’d be at, I wouldn’t have believed you. With Leevi, I don’t know if there’s another swimmer that’s gone four-for-four four years in a row in the same event (50 free). I’ve been here for a while and I’ve never seen that, so that’s special. Also, Andrew had a U.P. (Finals) record in the 500 free (4:55.13), so that’s awesome for him.”