The Gremlins earned their second straight U.P. Finals title after finishing runners-up in both 2016 and 2017.

“They all came together today,” Houghton coach Erik Johnson said shortly after taking a dip in the Marquette High School pool. “My favorite bath is something special.

“Our depth is what helped us today. We were pretty senior-oriented this year, and we’ll let them soak it in and enjoy it. Kevin Beagham had a great day. Being a senior and team captain, this is special for him. As for the perfect season, it’s something I really don’t keep track of. Our kids are pretty loud about getting their friends fired up. The seniors left their mark on this program.”

Beagham won the 100-yard breaststroke in 61.18 seconds, 200 individual medley (2:15.67) and helped the Gremlins take the 200 medley relay (1:52.61) with classmates Cameron Jackson and Colton Haataja and freshman Davin Evans also part of that relay.

“This feels amazing,” said Beagham, who plans to attend Iowa State University this fall. "We’ve been working for this all year. There was a lot of pressure this year. We definitely had a target on our back.

“The 100 breaststroke was a little rough, but I think all the other events went pretty well. I’ll remember this forever. I’m real proud of all our guys and girls. I couldn’t have done any of this without them.” 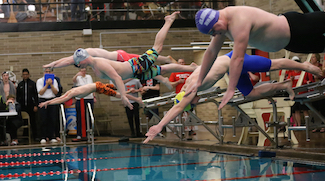 “That relay is a challenging race, especially with it being at the end of the meet,” said Johnson, whose future plans include serving an electrical apprenticeship in Minneapolis. “You’re using all your muscles and you get a little sore, but it’s all worth it. All my friends are on the 400 freestyle relay, and this gave us one last chance to swim together. I’m just happy the meet went the way it did. We’re pleased to come out as runners-up.”

Marquette coach Nathan McFerrin said he was pleased with the team’s effort.

“At the beginning of the year, if you told me we’d tie for second, I wouldn’t have believed you,” he added. “Our boys numbers were a little down this year, but we have 10 incoming freshmen and four of the eighth-graders could have won the 200 medley and freestyle relays. We have a lot to be excited about.”

Gladstone took a relay title for the first time, covering the 200 medley event in 1:41.48.

“It’s awesome to tie for runner-up as a team and be the first team from Gladstone to win a relay,” said senior Tyler Barteld. “I’m proud of all our guys. Having low numbers makes it feel more like a family than a team.”

It’s fun to compete against the best in the U.P.,” said Innerebner. “I basically took into account that I was in the first (individual) race. I wanted to set the pace and get everybody excited.

“I remember Coach Steve (Hubuata) telling us we’re here to shock the world. We did great today. We had a lot of personal bests.”

PHOTOS: (Top) A Houghton swimmer helps his team toward the championship in the butterfly Saturday. (Middle) Swimmers launch during one of the day’s early races at the Upper Peninsula Finals. (Click for more from Jarvinen Photos.)