MARQUETTE – Overwhelming favorites to begin the day, the Marquette Redmen might have surpassed even their own lofty expectations Saturday at the MHSAA Upper Peninsula Swimming and Diving Finals in their home pool.

Marquette dominated to the point that they rendered the day a competition for second place, winning their third straight U.P. title with 326 points, followed by Houghton with 208 and Sault Ste. Marie with 205.

"We knew if they didn't disqualify in starts or turns, that they would dominate," Marquette coach Nate McFarren said. "We expected a lot from them this year, and they really tore it up today. It was pretty cool."

Senior Sam Williams had a day that any senior would love in his final sporting event. Williams broke three Upper Peninsula Finals records while capturing firsts in the 200-yard individual medley (1:57.11), 100 breaststroke (58.02) and as part of the 200 and 400 freestyle relay teams. His 200 IM time was nearly three seconds faster than the previous record, and his 100 breaststroke time was a full two seconds faster than the previous best in that event and six seconds ahead of his closest competitor. Williams also set the U.P. Finals record for the 100 freestyle while swimming on the 400 freestyle relay, with a time of 48.39.

Of the breaststroke, an event that proves difficult for many swimmers, Williams said, "The thing a lot of people don't understand is the breaststroke is not as much about power and speed. It's about decreasing the resistance. If you can get a good body line on every stroke, you're going to be better off than most people."

Williams began swimming competitively at age 10 and had a goal even then to win a U.P. title at the high school level before going on to swim in college. According to McFarren, the second part of Williams' goal is likely to be realized as well.

"Sam was quite a bit ahead of his closest competitor today, so we focused on him getting used to swimming by himself and visualizing his race with someone swimming next to him," McFarren said. "He's a very bright individual outside of swimming. He's number one in his class. To be with him for four years and watching him grow from a freshman to a senior, it's been my honor."

Marquette also had a standout in junior Andrew Kilpela, who earned a first as part of the 200 medley relay and was second in the 100 backstroke, arguably the best event of the day. 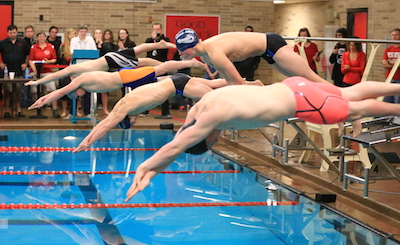 Gladstone junior Matthew LeClaire had an outstanding performance, highlighted by his victory in the 100 backstroke (54.33), which broke the previous U.P. Finals record of 54.91. Kilpela also broke the U.P. record with his time of 54.72. Throughout the race the two rivals pulled a hair ahead of one another, and the final 25 yards were neck and neck.

"Matt works very hard, and when he comes to this meet and swims against Andrew, that just seems to fire him up," said Gladstone coach Tom Desy. "That was about as close of a race as you can get. It was back and forth, definitely the race of the meet."

LeClaire, who will continue his rivalry with Kilpela next year, said he was battling his own thoughts prior to the race.

"It was tense getting ready for the race," LeClaire said. "The kid from Marquette was seeded ahead of me, and it was in my head. I was thinking oh man, I don't want to lose this; I can't lose this. I tried to hold it down and keep going."

LeClaire also won the 100 freestyle (50.64), which Williams did not race, and was part of the Braves' 200 medley relay team, which placed second.

Marquette's depth, however, was so pronounced that most of the other schools were simply seeing red for most of the day. The Redmen even had a 1-2 finish in the 200 IM, with Matt Kurin finishing second to Williams. Ben Luke won the 100 butterfly (57.77), Matthew Nykanen placed third in the 100 breaststroke and 100 freestyle, and Ryan Glover was third in the 100 backstroke. The Redmen also won all three relays.

"We're lucky to have some serious depth on the boys team," said McFarren. "Some finished second or third to their own teammates. Being able to put together three relays that win isn't always heard of.

"I was really nervous about our relays today because I spread our talent out," added McFarren. "I wanted to go after it in all three relays, and I probably couldn't have done it without the help of Andrew and Sam. Having Sam lead off two relays and lead us to victory, and break that individual record in a relay, is pretty cool."

Marquette will lose Williams to graduation, but with its superior depth, will be in good position to go for a fourth straight title next season.

"Sam will be a huge loss, but we're only losing two seniors, and we had a really talented team this year, outside of Sam," McFarren said.

PHOTOS: (Top) A swimmer leads the butterfly during Saturday's Upper Peninsula Finals at Marquette. (Middle) Swimmers launch for another race. (Click for more from Jarvinen Photography.)