MARQUETTE – For the second year in a row, the Marquette boys swimming & diving team climbed atop the Upper Peninsula podium, and on Saturday, they did it in dominant fashion.

This was also Marquette’s third team championship in five years.

“I don’t think it was really going to be a surprise,” Marquette head coach Nathan McFarren said. “I don’t want to sound cocky, but coming in, we were pretty stacked. We’ve broken records, but I don’t know if we’ve ever had this much depth. A couple of events we went 1-2-3. We won every single relay outright. The whole day was electrifying.” 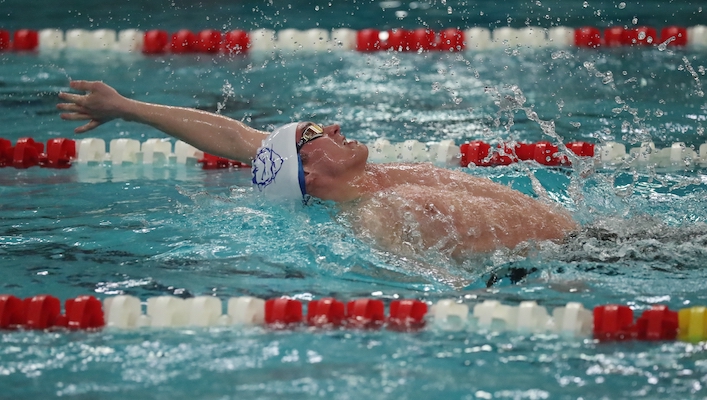 According to Coach McFarren, both Liam McFarren and Vanderschaaf finished the season undefeated, including relays, and the coach said the whole team was locked in from the start.

“The focus this year having a team of mostly sophomores is way up,” he said. “Shortened season and everything came together in the end. It was pretty sweet.”

Morgan Burd earned two titles for Sault Ste. Marie, in the 50 free and 100 backstroke, and Cameron Bauers won the 1-meter diving competition Friday night. Houghton’s Davin Evans was the other individual champion as he won the 200 individual medley.

All in all, McFarren was extremely pleased with his team’s performance and knew from the opening event it was going to be a fun afternoon.

“Oh my God, it was amazing,” he said. “I could tell from the moment I showed up that was going to be an electrifying day.”