Chelsea’s standout senior will next weekend cap a career that’s seen him win two MHSAA championships – with an opportunity to at least double that total in his final meet. Mangner swam the fastest 50-yard freestyle time in Michigan this winter (20.78 seconds) to win the race at Saturday’s Southeastern Conference White championship meet and was part of three more victories and four school records total to earn the Michigan Army National Guard’s “Performance of the Week.”

Mangner also won the 100 freestyle (46.50) and swam on winning 200 medley (1:35.59) and 400 freestyle (3:12.10) relays as Chelsea finished second to Dexter, the reigning MHSAA champion in Lower Peninsula Division 2. Chelsea is ranked No. 3 in LPD3 and finished third last season, and Mangner has played a significant part in helping the program rise over his four seasons. He’s an eight-time conference champion and as a freshman helped the Bulldogs to their first league title since 1995. He’s an 11-time all-stater, with individual titles in the 50 as a sophomore and as anchor of the medley relay last season. He’s also earned All-America status in both of those events and is part of five Chelsea pool records in addition to the four school bests.

But Mangner still has plenty he’d like to achieve next weekend at the Holland Aquatic Center. In addition to team goals, he’s focused again on his best event – Mangner was disqualified from the 50 last season for a false start and after entering the championship heat as the top seed, and his time from Saturday’s SEC meet would tie the LPD3 Finals record. He intends to swim collegiately next season and likely will choose between Oakland University and University at Buffalo, with a course of study to be determined.

Coach Dave Jolly said: “Joey is an extremely gifted young man. He has the ability to do some of the most amazing things in the water. What is even more special is how humble he has stayed throughout all his acclaim. He is all about his team and watching them all be successful. It has been a true honor and privilege to have had the opportunity to work with him over these past four years.”

Performance Point: “Out biggest rival was Dexter, in conference at least, and we knew they had a lot more depth than us, a lot more people, and we knew it would be hard to compete team-wise and scoring wise,” Mangner said of the league meet. “Going especially into my senior year, with all the other seniors, we wanted to do the best we could. It’s probably one of my favorite meets. At the state meet level it’s more about being super serious, super on. This (league meet), being at home, knowing the teams close to us, it’s more of a fun meet, for me at least. I was trying to have as much fun as I could have with it and finish off the league as best I could.” 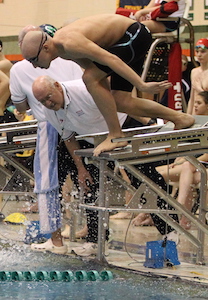 Redemption: “When I think about last year, there was a lot of pressure on me. I had won the 50 (as) a sophomore, and coming back junior year as the defending champ, I had all the pressure. I was seeded first, and everyone was kinda expecting me to win, and then that (false start) happened. Going into this year, I can’t do anything that isn’t better than last year, and that takes a little weight off my shoulders.”

Chelsea’s climb: “It just shows if you just try hard, try your best at something, you can do whatever you want to achieve. In the offseason, I didn’t swim as much as other guys did – I still practiced, but I didn’t go to every single meet – so it’s just exciting to be one of the better swimmers to come out of Chelsea.”

Play them all: “I did water polo all four years as well, and I tried track my sophomore year but I didn’t like that too much. (But) I like to play pretty much any sport. If basketball season wasn’t the same as swim season, I definitely would’ve given basketball a try, and I also think baseball is fun.”

Dream Finals finish: “It definitely would be fun to win the medley again. Coming back from last year, I’d hopefully love to be champion in the 50 free. I’m looking at the 100 (free) more so for getting the varsity record; I’m not too worried what place I get in the 100. One of our relays, the 200 or 400 free, we’re going to stack on them and go for a state (LP Division 3) record. For the 50 I’ve tied the D3 record, so I would love to get that.”

PHOTOS: (Top) Chelsea's Joey Mangner celebrates finishing first in the 50 freestyle at the Lower Peninsula Division 3 Finals in 2015. (Middle) Mangner prepares to launch for the final leg of the 200 medley relay at last season's Finals. (Click to see more at HighSchoolSportsScene.com.)