Zofchak entered this season poised for a strong finish to his high school career coming off his first MHSAA championship and a Lower Peninsula Division 2 Finals record in the 100-yard backstroke (49.72 seconds) last winter. He’s on pace to equal that success – and accomplish much more. Zofchak was one of two multiple winners at Saturday’s Spartan Invitational at Battle Creek Lakeview, besting a field that included most of the top-ranked teams in Lower Peninsula Division 2 to earn this week’s Michigan National Guard “Performance of the Week.”

Zofchak won the 200-yard freestyle in 1:42.07, more than five seconds faster than the runner-up, and his winning backstroke time of 51.44 was more than a second faster than the rest. He also swam on the winning 400 freestyle relay (3:13.36) and fifth-place 200 medley relay (1:40.39). Top-ranked Dexter as a team finished first overall, in front of No. 4 Warren DeLaSalle and also ahead of No. 5 Lakeview, reigning champion and No. 2 Birmingham Seaholm, No. 3 Birmingham Groves, No. 8 Grosse Pointe South, No. 10 Portage Northern and Division 1 No. 2 Ann Arbor Skyline.

The two-time team Most Valuable Performer holds three individual and a relay school record, and last season was part of 17 pool record swims at pools throughout Michigan. He’s also earned All-America honors five times from the national coaches association and has signed to continue his swimming career on scholarship at the University of Michigan. Zofchak is a member of the National Honor Society, and last summer he qualified for the U.S. Olympic Trials in the 100 and 200 backstrokes with times of 56.94 and 2:02.56, respectively.

Coach Michael McHugh said: “Rob is a gifted swimmer, but without the hard work and dedication he has shown throughout his career none of the accomplishments would have been possible. He puts himself in a position to succeed each day and motivates his teammates to raise their effort level to match. He is such a versatile swimmer that I can put in almost anywhere in the lineup and know he will come through for the team. As a captain for us this year he has shown great leadership and a willingness to go the extra distance for his teammates. His teammates look to him in big moments, and he is always ready to give it everything he has in order to get the job done.”

Performance Point: “I think (Spartan) went pretty well. Obviously, there’s a lot that I still need to improve – and there always will be. But it really sets us up with most of the other teams. The meet had most of the top five or six teams in Division 2 there. … We’d never actually gotten a trophy at that meet.”

Title time: Dexter won its last MHSAA team championship in boys swimming & diving in 2012; the Dreadnaughts finished fourth, second and third at the LP Division 2 Finals over Zofchak’s first three seasons. The Dexter girls, including his sophomore sister Sarah, won the LPD2 title this fall. “I know a lot of the guys are really looking at trying to get that title, especially with the girls winning it. It would be a great way to end my high school career, for sure. It would be a really great way to end it after all we’ve been through.” 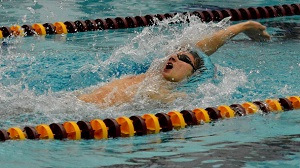 Family ties: In addition to Zofchak’s younger sister, his older brother Jonathan was a Dexter standout and swims at Michigan State. “I try to teach my sister as much as I can, which is not much. I like to help her as much as I can. With Jonathan, I always try to go after him. I always want to beat my big brother.”

Chasing Clay: “Certainly, there are times and names out there that you always want to measure yourself up to, come close to those times. Clay Youngquist’s times (for Battle Creek Lakeview) in everything; I look at those and aspire for those. His 200 free (1:34.28 in 2011) in pretty absurd, probably untouchable. But I’d like to swim at the end of the year and at least be close.”

Hailing U-M: “I really admire the program there. I really admire the coaches, and I like what they have going on. On top of being one of the best swim schools in the nation, it’s a top academic school as well. Especially with it being 15 minutes from my house, it was one of my greatest choices. I’ll try for med(ical) school. My uncle is a doctor, and I want to help solve issues with people, help make people better.”

The Michigan Army National Guard provides trained and ready forces in support of the National Military Strategy, and respond as needed to state, local, and regional emergencies to ensure peace, order, and public safety. The Guard adds value to our communities through continuous interaction. National Guard soldiers are part of the local community. Guardsmen typically train one weekend per month and two weeks in the summer. This training maintains readiness when needed, be it either to defend our Nation's freedom, or protecting lives and property of Michigan citizens during a local natural disaster.

PHOTOS: (Top) Rob Zofchak was a two-time champion at the Spartan Invitational, winning the 200 freestyle and 100 backstroke. (Middle) The backstroke is Zofchak's favorite stroke, and he is the reigning Lower Peninsula Division 2 champion in the event. (Action photos by Doni Houghtaling; head shot by Tammy Lynne Photography.)