Montague already was going to graduate as one of the fastest swimmers in MHSAA history. But Saturday, he finished his final high school meet by setting Lower Peninsula Division 2 Finals records in two events for the second straight season, earning the Michigan National Guard Performance of the Week.

Montague’s championship race time in the 200-yard individual medley of 1:47.40 at Saginaw Valley State University broke the record he set at last season’s Division 2 meet by nine tenths of a second. His 53.93 in the 100 breaststroke broke his previous meet record by 73 hundredths of a second. He also swam on a 200 medley relay that came in runner-up and a 400 freestyle relay that came in fourth.

Montague holds all eight individual swimming records at Grosse Pointe South and has been part of record medley and 400 freestyle relays. He is the son of former University of Michigan swimmer Andy Montague and started in the sport at an early age, but gave it up during middle school to play baseball and tennis. He returned to the pool as a freshman and played all three sports that year at South before injuring a knee and focusing on swimming the rest of his career. Montague will follow his dad to U-M and is considering majoring in business.

Coach Eric Gunderson said: “In addition to setting new D2 records in both of his individual events, Jacob made a huge contribution to our relays. His breaststroke on the medley relay was incredibly fast … and his anchor leg of the 400 free relay was really fun to watch as he caught up to people at the end of it. Jacob is quite talented, but he also has an amazing work ethic. It has been a privilege for everyone to watch and to be a part of his success and dramatic improvement over the course of four years. It will be exciting to see what he can achieve going forward.”

Performance Point: “I’d say the most fun parts were the relays this year. We finished second in the medley relay and fourth in the 400 free relay, and our 400 free relay brook our school record set in 2010. That’s what was most exciting for us; we were a little off it from prelims, and we said that’s our goal. It wasn’t about place; it was about breaking that record. I was happy with my individual swims as well. I was hoping to go a little faster, but for where I’m at with my season with my taper and everything, I was happy with my times.”

Different this time: “My junior year, nobody really knew me. Everybody was expecting other people to win. Other people were seeded higher than me going into the meet, and I had nothing to lose. I would just go for it. This year there was a little more pressure having won last year. But I tried my best not to think about that really, just to focus on swimming. And it still turned out well.” 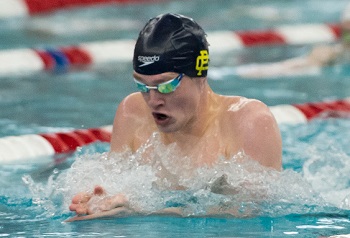 Destination reached: “It definitely was a long journey, a lot of hard work and a lot of practices the past three years. My mind was on one goal – to be the best I can be. Definitely at times I’d get tired of it, worn out going in every day for three hours and swimming back and forth. But you get to the end of the season, you’re feeling better, swimming faster, and it pays off at the end. I didn’t really have any expectations my freshman year, especially. I was just excited to be part of a team. And our team has been good since my freshman year as a whole, and I was excited to be a part of that.”

Pools of knowledge: “My dad, he’s definitely made a big impact. He doesn’t try to intrude on my training; I control what I do and make my own decisions what I do. But he definitely gives me pointers all the time. And also (Grosse Pointe South assistant and club coach) John Fodell. … He’s fixed my stroke, made me faster every day.”

Born to swim: “Especially my freshman year when I was getting back into it, it got monotonous. Every day, doing pretty much the same thing, back and forth, over and over for three hours. But as I improved and got better, I realized I can’t improve unless I enjoy the process of getting to that point. You have to enjoy the pain you feel during and after, being sore and what not. It’s almost soothing being in the pool. There’s nothing else to think about besides swimming."