Coach Todd Smeenge said: “Skyler’s success has been due to a strong work ethic and drive to get faster. Skyler sets goals that are just far enough out that he has to really work hard to make those goals. He is not the biggest kid on the team, but his heart makes up for what he might lack in stature, and his stamina takes over from there. Skyler is like the energizer bunny in the pool. It's not often that a workout taxes him beyond what his body can handle. When it does, he recovers and attacks his goals again the next day. … As far as the team goes, his work ethic pushes a lot of his peers, but it is really his words of encouragement to younger athletes, guys that are trying out the sport for the first time, that is going to be missed. He isn't flashy about it, but I often see the little things he does and says on the deck at meets that encourages or positively challenges those newer or younger swimmers.”

Performance Point: “The end part was the best part,” Cook-Weeks said of Saturday’s Finals, “because that’s when we won the meet and sealed it off with the 400 free relay, and that sealed the whole thing for us to win our first championship in 20 years. … Each practice we would always push each other to be the best; even if it was warm-up we would go fast. But once we got to the main sets, that’s where we’d push each other. Even for the kids who just started out, their freshman year, we wanted to push them to be the best that they can be. … I’m happy with how it turned out. At the beginning of the season, if somebody would say, ‘You’re going to win a state championship at the end of the season,’ I would say I don’t think we would. But in the end, we got it done.”

Picked up from Parker: “After my sophomore year, I went to his DII nationals in Indianapolis, and I went there and I watched how their team interacted with each other and treated everyone. And I took that to my junior year and to my senior year, to be more interactive – help people with what they need to be helped with and be a better teammate and a better leader.” 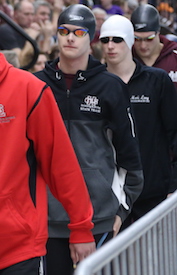 Building faith: “I think (becoming a leader) helped me become a better person, and it helped my faith a lot because my faith when I came in as a freshman wasn’t that good. But it progressed better and better throughout the years. I got into praying before each race, and praying for others that they could do the best they could do.”

Mr. Versatile: “I’ve always been known as a distance swimmer, but I kinda developed into more of a sprinter. So I can do the 50 and 100 but I was really known for the 200, 500, 1,000 and mile. When I first swam (the mile) in the summer of 2014, I wanted to scratch out of it because I hadn’t done it before. It took forever. Once I swam the mile for the first time, I went a pretty decent time. After that I developed into a different swimmer with a lot of endurance. I want to try to take that into sprint events because that’s where I can help out the team.”

Back on dry land: “Everyone at school has probably only known me as a swimmer, like that’s all he focuses on. But when I get home I like to watch other sports and hang around with friends. … I like to watch football – I root for the Carolina Panthers.”

PHOTOS: (Top) Skyler Cook-Weeks launches during the 200-yard freestyle at the LP Division 3 Finals. (Middle) Cook-Weeks follows the line on the way to the start for the 500. (Click for more from HighSchoolSportsScene.com.)