Murphy is an accomplished champion as one of the nation’s top swimmers in his age group. This winter, he decided for the first time to compete as part of Novi High School's team, and finished a dominating run March 11 with Lower Peninsula Division 1 Finals victories in the 200-yard individual medley and 100 butterfly – with an all-Finals record in the latter – to earn the Michigan Army National Guard “Performance of the Week” for March 6-12.

Murphy’s winning 200 IM time of 1:48.99 was more than a second faster than the field. But his butterfly time was the stunner – 46.63 seconds, breaking the former all-Finals record swam in 2011 by Battle Creek Lakeview star Clay Youngquist (who went on to swim at University of Texas) by 48 hundredths of a second. Murphy also swam on second-place 200 medley and fourth-place 400 freestyle relays as Novi as a team finished fourth overall. Murphy earned automatic All-America honors from the National Interscholastic Swim Coaches Association this season for his IM and butterfly times and also for the 44.78 he swam in the 100 freestyle, while the 400 freestyle relay is under All-America consideration. Murphy will graduate with Novi records in all three of those individual races and as part of the two relays.

This past weekend, Murphy won the butterfly at the National Club Swimming Association Junior National Championships (in 46.58), and he has an eye on eventually making the U.S. national team. He’s signed to continue this fall at the University of Georgia, where he’s considering studying business. He'll leave behind a major impression made in his one high school season – Murphy was named “Division 1 Swimmer of the Year” by the Michigan Interscholastic Swam Coaches Association, but showing his selflessness, said his best memories were watching his teammates hoist a team trophy and coach Brent Pohlonski receive MISCA’s Division 1 coaching award at the meet.

Coach Brent Pohlonski said: "It was an honor to coach Camden this season. For a swimmer of his caliber to be so humble and team-oriented was very refreshing. Each week he was willing to swim whatever events our team needed him to win. He was very open to suggestions from our entire coaching staff, and the guys on our team loved swimming with him. He is very deserving of all the accolades he is receiving. He is a perfect example of great things happening to great people."

Performance Point: “Honestly, the high school state meet … had the strongest atmosphere,” Murphy said. “It was really loud, really exciting. Everyone takes it really seriously, and that makes it fun. I kinda expected things to turn out the way they did, but a lot of it was a surprise. The state meet was a really big deal; there were a lot of people in the stands, and I wasn’t expecting there to be.” 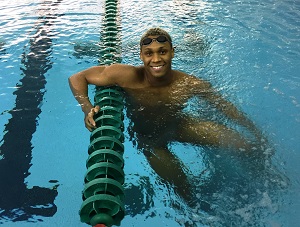 Big deal beating Youngquist: “I had heard his name for a really long time, and I know he was really fast. (But) not until a few people told me who had raced against him, and told me it was a really big deal ... then it hit me.”

Bulldogs and business: “Right now I’m thinking business. I’ve taken a lot of business classes, and I thought a lot of them are really interesting. I might go into marketing or management, but I’m not sure yet.”

PHOTOS: (Top) Novi's Camden Murphy swims the butterfly during a meet this season. (Middle) Murphy, in his only high school season, was named MISCA's "Division 1 Swimmer of the Year." (Photos by John Heider (top) and Brad Emons/Novi News)