Hurbis is finishing a high school career that will rank among the most prolific in Michigan high school diving history, and over the last year he’s been on a particular tear. After defeating reigning champion Jake Herremans of Rockford at last season’s MHSAA Lower Peninsula Division 1 Final, Hurbis has continued to be the favorite to beat, and earned the Michigan Army National Guard “Performance of the Week” by posting a score of 531.70 last Friday to break a 17-year-old record and win the event at the Michigan Interscholastic Swim Coaches Association meet at Eastern Michigan University.

Hurbis finished second in LP Division 1 and third as a sophomore before last year’s championship win, and his meet record at EMU bested the previous by more than 11 points. It’s in part a product of hard work; Hurbis has been training at EMU since he was 9 and during high school season regularly has put in double practices, even when he also was playing baseball as a freshman. This winter's performance has been impressive for another reason: Last spring, after taking first and second places at USA Diving Junior Regionals, Hurbis was faced with the challenge of coming back from June shoulder surgery – which he accomplished, about a month early, in October.

A big-time University of Michigan, New England Patriots and Detroit Tigers fan, he’ll be rooting for other Tigers the next few years diving at Louisiana State University. Hurbis carries a 3.4 grade-point average and is interested in studying for a future in sports business. First, he'll help the Hornets as they try to break Birmingham Brother Rice's three-season hold on the Division 1 title; Saline was runner-up a year ago. Hurbis is a team captain, a rarity for a diver as he competes in only one event for his team, but also a testament to his leadership.

Coach Todd Brunty said: “Dakota is simply one of the best we have ever had. He is hard-working and dedicated to his sport. He has worked tirelessly all year round at Legacy Diving Club in Ypsilanti for as long as I can remember to become one of the best divers in Michigan high school history. He was elected by his teammates as captain of our team for many reasons. I think the main reason is that he has always been a team-first guy. Many swimmers or divers that are as good as he is may not compete in high school and just dive club diving (where they can spend more time on 3-meter and 10-meter events not competed in high school but competed in college). Dakota stayed loyal to his team and to the guys he grew up with here in Saline. He has even swam at our championship meets and dual meets to fill crucial relay positions to help the team. He is also very helpful to new swimmers and divers. Dakota is always supportive and helpful to them, teaching them new things and spreading the love of the sport to them. It is like having a second dive coach."

Performance Point: “The MISCA meet is a really big meet for me because it’s all divisions; we have the state meet but it’s only our division, so this is the best competition I’ll face with divers from all over the state," Hurbis said. "I was seeded first going in but I knew a couple of people were really close to me, and I knew I’d have to have a really good meet. I just went into that meet knowing I’d have to focus up a little more and do a little extra, and once the meet started all my training and everything took over. I got into meet mentality, and I had myself a pretty good meet.”

It’s always been diving: “Ever since I was a kid, I liked being around the water. My older brother (Steven, 2009 grad) swam, and I saw him on the high school team and that he got a lot of close friends (from swimming). I did the country club stuff when I was younger, and I just enjoyed being around the water. Once I started diving, it came pretty easy to me, and I had coaches tell me I could be good at it. I played baseball, I played football, I swam a little bit, but diving is what I’ve always been passionate about.” 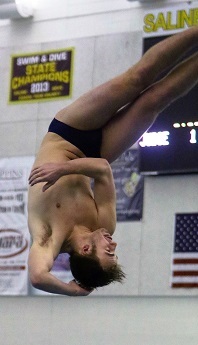 Speak up: “I’ve tried to be the best team player I can be during my four years here. My sophomore year I began giving pregame speeches in the locker room, and every opportunity I’ve gotten I’ve tried to step up and lead the team – be outspoken, be a good example for the people following me. … When we go into the locker room before meets, sometimes people say a couple things. (I try to be) a little funny and (with) a little bit of motivation. The key is you’ve got to mix them both together.”

Comeback trail: “My shoulder had been bothering me since winter, and I had a pretty big torn labrum. I wanted to wait until after senior Zones, but my coach told me to get (surgery) done as soon as possible so I could come back for my senior year. … I ended up getting in the water in mid-October again, and in the beginning I was just trying to get all my dives back on all boards – 1-meter, 3-meter and platform. A lot of people were surprised I came back early, and when I came back I got my dives back right away. I’ve got a couple of extra dives on 1-meter I haven’t competed yet, and on 3-meter I’ve got a couple of new dives, which is nice. I’m constantly adding stuff; some people throw bigger DD (degree of difficulty) dives, but I try to do what scores best.”

Business of sports: “I’m actually really good with numbers, math and numbers, so I might do something with that. My whole life I’ve followed sports; I can tell you anything about professional sports, college, and my brother and dad are the same way. It’s sometime I’d like to go into.”