The record-setting sprint star capped his high school career Saturday with two individual titles and as part of two relay championships at the Lower Peninsula Division 3 Finals, earning the Michigan Army National Guard “Performance of the Week.” In addition to his championships, Peel became the first swimmer in Michigan high school history to break 20 seconds in the 50-yard freestyle, swimming an all-Finals record 19.86 seconds in prelims and 19.91 in the championship race.

Sprinting runs in the Peel family, at least these last two generations – his father Rob, also Spring Lake’s coach the last three seasons, won an NCAA Division III championship in the 50. Sister Meg Peel has reached the Division III Finals as well in the backstroke. Cam actually quit swimming during middle school, taking up football and lacrosse as his main pursuits instead. But he returned to the pool for high school, and will continue at University of Michigan. He carries a 3.85 GPA and plans to study business with an emphasis on property management or marketing.

Coach (and father) Rob Peel said: “I’m nothing short of amazed by Cam’s dedication these last few years. He’s earned everything that he’s accomplished, has worked so hard and sacrificed so much to go so fast. It was an experience for me both as a coach and especially his dad to watch him perform last weekend. It was one of those things, it made me try to hold it together when he’d swim so fast. I was thrilled when he got third at state a couple of years ago – it was a 46.99, I couldn’t have been more proud of that. And for him to go as fast as he has the last couple of years has just blown me away. It’s been inspiring I think to other kids on our team to see you can just put your head down and commit to excelling in a sport and get those kind of results, because I think there are other kids on our team that look at Cam and now say, I can have that – maybe not to that level, but I can be successful in this sport because it’s based upon your work and commitment and sacrifice, and they watched him every day do that.”

Performance Point: “I didn't know that no one had broken 20, so it was a little bit of a surprise for me,” said Cam Peel of his 50 record time. “It's a super high honor, and I'm really proud of it. After prelims, I was told they announced it at the other division state meets; it was pretty cool. … My biggest takeaway (from Finals) was probably that I had a lot of fun with my team. Fourth place, we were super close, one point away (from third), but I couldn't ask for a better way to go out with my brothers.”

Magic numbers: “I had been wanting to see 19 for a long time, too early than anyone thought I should. It was super relieving, and I was super buzzed I finally did it. … My freshman year at states – I only swam one event and I swam three relays – but I led off our 2(00) free relay and I went 22.40, and after that season I didn't set a number time, but I wrote a little note to myself and kept it in my room. I still have it to this day. It says I was gonna win states the following year in the 50, which didn't happen, But for that to finally happen (this year) was great.” 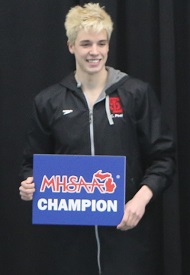 Spring Lake pride: “Our team swam great. We have Kevin Losee and Joey Wachter, two standout juniors that are coming back next year. They helped me train all year. That's what nobody seems to realize, is that they're pushing me every single day. And guys like Evan (Schock) and Sam (Sella) and Eric (Geschiere), the seniors, to make it to state there, it was a total team effort.”

Dad knew: “One thing he always said was find something you're passionate about. And before high school, I didn't really know what I wanted to do. Then I found swimming, which I'd swam before, but I quit because it was hard and time-consuming. My dad had always said as long as I keep getting faster, I'm going to keep swimming. I guess I've been living by that, and I want to continue doing that as long as I can.”

Coach’s Son: “He's been a great coach. I always get a bunch of flak from the other swimmers about being the coach's son, but it kinda comes along with it. My name changed from Cam to "Coach's Son" pretty much the whole year. And my dad would joke around; we’d ask after swim meets, ‘Do we have to warm down coach?’ I'd be in the mix, and my dad would say, ‘Yeah, you have to warm down, but Cam you don't have to do anything.’ It was just a joke. … He tells me when I ask (for advice). He doesn’t feed me with information, but it’s cool too to look back at stuff he’s done. We have old videos of (his races), and he has an awesome mind in the sport. So I’m learning as much as I can now, and I think it’s going to benefit me in the future. His best events were the 50, 100 and 200, but mostly the 50 – his short course time was 19:83. He was three hundredths of a second faster (than me) in the 50, but I think I have him in the 100 and 200.”