The Trenton senior standout set meet and pool records in the 200-yard freestyle (1:43.85) and 100 butterfly (50.03) at Allen Park on Saturday in helping the Trojans to the team victory at the Downriver Classic. Wolsek also was part of a meet and pool record-setting 200 medley relay (1:39.17) and meet record-breaking 400 freestyle (3:18.13) in earning the MHSAA “Performance of the Week” as Trenton claimed the Classic championship for the first time in five years.

Wolsek grew up in the pool; his father Robert was a Trenton record holder at one time and helped create the community’s youth swim lesson program, and three older siblings also starred for the Trojans. Michael holds school records in the 50 (21.52), 100 (47.60) and 200 freestyles (1:42.72), 100 butterfly (49.89), and as part of the record 400 free relay (3:17.52). All four of his individual school records also are league records, and he was also part of a league record 200 medley relay (1:39.14) as well. Wolsek finished second in the butterfly and fourth in the 200 free and swam on two scoring relays at last season’s Lower Peninsula Division 3 Finals, where Trenton finished ninth – also its current team state ranking this winter. He called his winter “just a culmination of all the great coaches I’ve had the opportunity to work with,” and obviously it’s paying off – Wolsek’s season-best fly time of 50.03 ranks first in the state by nearly a second, and his top 200 free time of 1:43.85 is eighth-fastest.

He’s part of a talented cast; among teammates, junior Spencer Boling-Hamer won the teams’ first Finals individual championship last season since 1969. Wolsek is one of three team captains and the first from his family to wear the “Helmet” – an honor bestowed on a senior annually to wear while leading the team into competition. Wolsek will continue his academic and athletic careers at Wayne State University. He carries a 3.7 GPA and is interested in majoring in kinesiology and studying exercise sciences.

Coach Jim DeRupa said: “Micheal has been a huge asset to the team. He has been focused on leading a younger group of swimmers. We have 18 new swimmers on the team this season. He shows his leadership as a captain by giving speeches at practices and meets to get the team fired up. He has helped the program significantly not only by winning events but by encouraging a team culture where everyone works hard and everyone is a part of the team. He is excited to see what the end of the season is going to bring for the team. He is focused on the current team, but is also excited to continue the sport in college.”

Performance Point: “This year, I feel like the whole team has come together in a way that I've never seen it come together,” Wolsek said. “I've had older siblings on the team, before I was in high school, and I've never seen the team come together quite like it (did) at the meet on Saturday. Everybody has been working so hard to make this team great. We're fighting for that league title this February. And the thing I take away (from Saturday) is when you're doing your swims for your teammates, the camaraderie and connection that we share, it helps. It makes it easier. I don't think I'm ever going to forget that sense of camaraderie that I felt on Saturday.”

Ready to lead: I’ve always loved taking every opportunity to be a leader on the team. I’ve been granted the opportunity this year as a senior leader to be able to not only help the freshmen and underclassmen and rookies with technique after practice, but I can also give speeches and have a more hands-on approach with my team. It’s just been absolutely awesome – the people I’ve met this year, the freshman are working so hard, and it’s probably been one of my favorite experiences just getting to meet and pass on what I’ve learned through my four years at this school to the younger guys.” 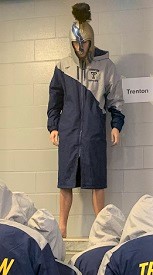 Wear ‘The Helmet’ proudly: “It’s a Trenton swim tradition. I believe it started in the 90s. Every year a senior who has the helmet passes it down to a junior who will be a senior the next year. And we have a very unique team chant that’s unlike anything else in the state of Michigan – we march out and align to a cowbell, and the person at the front of the line is wearing the Trojan helmet. … I’m so blessed to be a part of this culture. At Trenton High School, we’re very proud of our community, and our symbol, The Trojan, we’re very proud to represent that. Last year at our swim banquet, senior Donny Grocki passed it down to me … and after he gave it to me, he told me he gave it to me because he saw the work I put in and he saw the leadership that I demonstrated. When I found out I was the one who had it, I was very, very excited. It’s been my dream ever since I saw my brothers’ teams as a kid; you always see the guy wearing the Trojan helmet. I was very excited when I found out I got to represent our school like that.”

Watched and learning: “It’s definitely changed the way I think about the sport. I attribute a lot of my success to the opportunities I’ve had at home. My parents have always been extremely supportive of my swimming, and having older siblings that have all gone through the sport grants me the opportunity to be able to learn from their mistakes and to improve upon what I saw them doing. So I think the biggest thing is the culture at my house – every day I’m coming home and it’s swimming for breakfast, lunch and dinner, always swimming, and that’s definitely helped me.”

Science of speed: I’ve always been fascinated by locomotion and biomechanics, and they have a physical therapy and occupational therapy program at Wayne State which I’m looking to possibly pursue after getting my bachelor’s in kinesiology. Swimming’s been the one thing I’ve been consistently passionate about my entire life, and any of that that I can take into my professional career would just make it an absolute joy.”

PHOTOS: (Top) Trenton's Michael Wolsek, holding onto the Downriver Classic trophy with his right hand, is surrounded by teammates after the Trojans won Saturday's event. (Middle) Wolsek, in the team's Trojan helmet, provides some final motivation before an earlier meet this winter. (Photos courtesy of the Trenton boys swimming & diving program.)