A handful or reigning champions have dominated Lower Peninsula boys swimming & diving these last few seasons – but that could end this weekend. 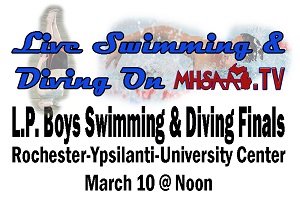 But two of those are not considered the favorites entering this weekend’s Finals, and it’s not hard to see a path for three new champions. Read on for a look at how the races stack up in all three divisions, plus some of the individuals who are expected to shine brightest.

Preliminaries are Friday and Finals are Saturday, with action beginning at noon for both. All three Finals also will be streamed live and can be watched with subscription on MHSAA.TV. Click for lineups and seed times for all three meets.

For the first time in a long time, there’s a feeling Brother Rice’s reign might end. The Warriors have won four straight LPD1 team titles and have some stars in the pool this weekend – but only five individual entries joining three relays seeded among the top 16. Skyline finished second last season by 26 points and is seeking its first championship with 12 individual entries and all three relays seeded to score, plus two divers including the reigning champ. West Ottawa was the runner-up in 2015 and is seeking its first team title since 1971. The Panthers have 11 entries and all three relays seeded to score after coming in fifth – but just 48 points back – last season. Saline, ranked No. 4 this week, came in third last year 36 points back and could be in the mix as well.

Derek Maas, Holland West Ottawa senior – Missed what would’ve been his first Finals title by finishing second in the backstroke last season, along with seventh in the individual medley, but enters this weekend seeded first in backstroke (50.94), fourth in IM (1:53.23) and as an option for all three relays but a likely leader of the top-seeded 200 medley (1:33.77).

Alex Margherio, Birmingham Brother Rice senior – Added a backstroke and relay title last season to another relay win in 2016, and this time is seeded second in the butterfly (50.47) and fourth in the 50 (21.22).

Jacob Newberger, Rockford senior – Won the consolation heats of both the IM and butterfly last season to finish ninth in both, but enters this weekend seeded first in the butterfly (50.34) and second in the backstroke (51.10).

Henry Schutte, Grand Rapids Forest Hills Central junior – Last season’s 50 and 100 freestyle champion is seeded first in both at 20.28 and 44.92, respectively, and should threaten the meet record of 20.26 in the former.

Henry Schirmer, Ann Arbor Skyline junior – Last season’s champion by more than 53 points won his Regional last week by 50 with the highest score in all of Division 1 at 522.35.

Dexter is competing for its third straight LPD2 title after finishing 27.5 points ahead of the field last season (and with runner-up Ann Arbor Huron now in LPD1 instead). The Dreadnaughts have only their three relays and seven individual entries seeded to score, but some depth including a few individuals who could break into the top 16. Rochester Adams is seeking its first title after placing 10th a year ago. All three relays are seeded to score, as are 12 individual entries, and the Highlanders boast a Regional champ diver as well. Seaholm finished third in 2017, 88.5 points back, but won this meet in 2011, 2014 and 2015. The Maples have all three relays and 11 individuals seeded to score, plus a diver, and enough high seeds to make this interesting at the top.

Alexander Capizzo, Fraser sophomore – After claiming both the IM and 500 championships as a freshman, Capizzo will attempt to repeat entering as the second seed in the IM (1:55.56) and third in the 500 (4:35.50).

Levi Youmans, Battle Creek Lakeview senior – Won the diving competition last season by more than 30 points and took second at his Regional last week with 443.90 – which ranked second in all of Division 2 as well.

If rankings are correct, another major streak will end as Cranbrook has won the last four LPD3 titles. Holland Christian came in third last season, just 26.5 points back, and East Grand Rapids was second trailing by 13. Christian enters this weekend with 17 individual entries and three relays seeded to score, including an astounding six top seeds. East Grand Rapids has nine entries and three relays seeded to score, but plenty of depth and two divers including a Regional champ. Cranbrook will work to contend again with all three relays and six individual entries seeded among the top 16.

Christian Bart, East Grand Rapids senior – The reigning champ in the breaststroke and 50 free has three individual and two relay titles total over his career, and enters this weekend seeded first in the 50 (20.68) and second in the breaststroke (58.09). That qualifying time in the 50 is four hundredths of a second off the meet record he swam in 2017.

Nolan Briggs, Byron Center senior – The reigning champion in the butterfly is seeded third this time (50.84); he also was fourth in the 50 last season and is seeded second (21.06) behind Bart in that race.

Kevin Hao, Bloomfield Hills Cranbrook Kingswood senior – Enters seeded third in both the breaststroke (58.73) and IM (1:55.18) after finishing fifth in the breaststroke and second in the IM last season.

Ian Miskelley, Holland Christian senior – Swimming his first season in high school (he previously attended Holland Black River, which doesn’t have the sport), Miskelley has shown why he’s been known as one of the state’s top talents. He enters the weekend with the top seed in the IM (1:50.63) that is only eight hundredths of a second off the meet record and the top seed in the backstroke (49.88) that is already faster than the meet record in that race. He’ll also swim on the 400 relay noted above.

Cayden Petrak, St. Johns junior – Last season’s runner-up to a now-graduated senior, Petrak missed the championship by less than two points. He won his Regional by 155 last week with a score of 496.10, second in Division 2 only to East Grand Rapids’ Nicholas Merritt (499.25).