But winning the title, Brother’s Rice’s third consecutive, was anything but easy as the Warriors overcame plenty of obstacles during the season and then held off a number of impressive teams in this weekend.

“We went through a lot of adversity this year,” Brother Rice coach Mike Venos said. “We almost lost a kid to meningitis this year, and we also lost some kids that we expected to score points for us this year.”

To overcome the hurdles, Brother Rice closed ranks and used its overall team depth to march to its third straight title.

“This was the best team effort I’ve been around,” Venos added. “That was the big key for us, our team effort. Our overall team depth carried us all year. The kids understand that the most important thing is the Warrior on our chest and not any individual glory. They always put the team first.”

That team-first attitude showed up in the relays where Brother Rice swimmers won two of three and finished second in the third.

Brother Rice also had an individual champion as Drew Grady won the 100 Breaststroke by more than two full seconds with a time of 55.18. 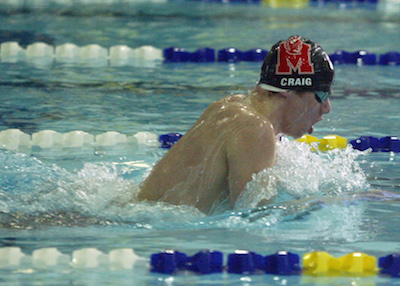 The lone relay not won by Brother Rice was the 200 Freestyle Relay. Ann Arbor Pioneer, the fifth-place finisher overall, captured race as senior Andrew Heise, senior Joe Riggs, junior Noah Frassrand and senior Jason Orringer-Hau turned in a time of 1:24.41 to edge Brother Rice by fourth tenths of a second.

One of the top high school swimmers in the country, Craig won an MHSAA title as a sophomore. Last year, however, Craig took the year off from high school swimming to train for the upcoming Olympics.

“This is my senior year and I just wanted to come and see everyone that I competed against as a freshman and a sophomore,” Craig said. “This is really a good way to end the year.”

Craig, who will swim collegiately at Arizona State University, raced to victory in the 200 individual medley in a record time of 1:45.42.  He set his second Division 1 and all-Finals record in the backstroke in a time of 47.33.

“I’ve been training real hard for this,” Craig said. “It was a goal of mine to win these state titles and set new all-class records.”

A local swimmer also came away with a pair of individual titles. Holland West Ottawa junior Spencer Carl won the closest event of the meet when he took first place in the 200 freestyle. Carl edged Ann Arbor Skyline’s Ryan Vander Meulen by one hundredth of a second in a time of 1:37.15 while Vander Meulen finished in 1:37.16.

“I’m extremely happy,” Carl said. “He was seeded a full second ahead of me. I think my underwaters were the difference. The last 25 yards I did super. That was what I’ve been focusing on all season.”

The MHSAA title was the first of Carl’s career, but he was not finished for the day. Four events later the local standout added a second title as he won the butterfly in 48.25. That time also set an LP Division 1 Finals record.

“It means a lot to do it close to home,” Carl said. “I had a lot of friends and family here. To do this in front of them is really special.” 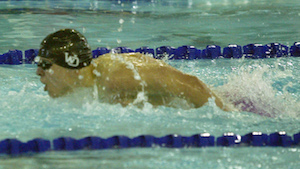 Carl wasn’t the only local swimmer to shine in front of the hometown fans, as senior Micah DeJonge of nearby Zeeland won the 500 freestyle in a time of 4:29.23. DeJonge also helped Zeeland to a second-place finish in the 400 freestyle relay and a third-place finish as a team overall.

Herremans came into the event as the two-time reigning champion and LP Division 1 Finals record holder. Hurbis finished second as a freshman and third last year.

“Going in, I really wanted this to be the best meet I’ve had,” Hurbis said. “I really focused on my dives, and once I started hitting my dives I got into a nice rhythm. This is really big for me.”

Jackson O’Dowd, a senior from Livonia Stevenson, was another swimmer who broke through. He won the 50 freestyle in 20.70.

“I finished third in two events last year,” O’Dowd said. “This is a big deal for me and a lot of fun. I was really hoping to win one my senior year.”

Vander Meulen, a champion last season in LP Division 2, did win a close race Saturday in the 100 freestyle. His time of 45.75 edged Henry Schutte of Grand Rapids Forest Hills Central by four hundredths of a second. Skyline finished fourth overall as a team.

PHOTOS: (Top) Members of the Brother Rice boys swimming and diving team hoist an MHSAA Finals championship trophy for the third straight season. (Middle) Monroe’s Cameron Craig swims the individual medley, one of two races he won on the day. (Below) Holland West Ottawa's Spencer Carl swims for the win in the butterfly. (Click to see more at HighSchoolSportsScene.com.)