Attending a prestigious school such as Birmingham Brother Rice, where academics and athletics success stories are the norm and somewhat expected, Andrew Biskup understands the pressures that came with the tradition-rich territory.

Biskup and his classmates exceeded those expectations during their prep careers at Brother Rice, and that all culminated Saturday at Oakland University.

The Warriors pulled away from a tight field over the final couple of events to capture their fourth consecutive MHSAA Lower Peninsula Division 1 Finals championship in boys swimming & diving.

“We had guys that swam at Rice 10 years ago. This shows how deep our tradition really goes and the expectations we have here,” said Biskup. “I knew we could be big, but we definitely exceeded my expectations of what I thought could be possible. We’ve always had a great program here at Rice, and it’s great to carry on our tradition.”

Brother Rice, which features 14 seniors and eight who scored points at the Finals, joined some elite company with the fourth straight title. The Warriors became only the ninth program in MHSAA lore to win at least four straight Finals championships.

“I don't think they understand the magnitude of what they have accomplished because they are so grounded,” offered veteran coach Mike Venos. “They are a humble group of kids that work so hard. Winning four straight titles, in any sport, is extremely difficult.”

This marked Rice’s 11th MHSAA title overall dating back to 1994, and sixth with Venos as head coach. Venos also recorded a Finals runner-up as head coach at Rice and served as assistant for two title teams at Bloomfield Hills Andover.

Rice is now fourth on the all-time list with its 11 total MHSAA Finals championships in boys swim and dive. Only East Grand Rapids (25), Ann Arbor Pioneer (18) and Battle Creek Central (16) have more in the sport.

Brother Rice opened the day with a win in the 200-yard medley relay, as Mason Wilczewski, Biskup, Alex Margherio and Jack Grady joined forces for a 1:31.72 clocking.

Margherio, a junior, came back to win the 100 backstroke, in 48.46 seconds. Grady, Patrick Olmstead, Wilczewski and Margherio capped the meet with a victory in the 400 freestyle relay in 3:04.25.

“This is just a great feeling. This team is so close,” said Margherio. “We have a great senior class — 14 of them and eight that scored — and some good (underclassmen). This is what our goal was since last year.” 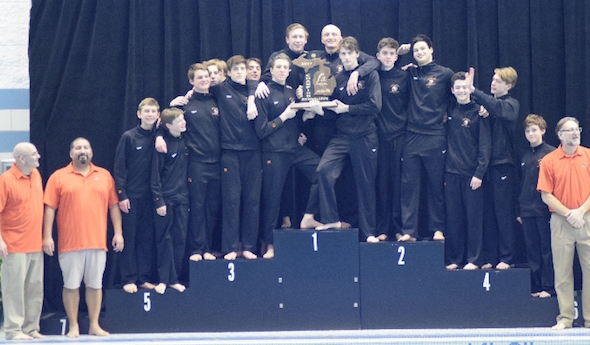 Rice held the lead entering the final event and just needed a top-eight finish to hold onto the lead.

“I knew we had the lead. I just wanted us to time our (exchanges right and not disqualify),” said Venos. “I knew if we placed high, we’d win the meet. They came back and actually won the relay.”

Novi’s Camden Murphy won the 200 individual medley (1:48.99) and 100 butterfly (46.63), the latter in a new MHSAA Division 1 and All-Division Finals record. Headed to the University of Georgia, Murphy won two events and placed on two top-eight relays (second in the 200 medley relay and fifth in the 400 freestyle relay).

“The butterfly has always been my favorite event, so to finally win it my senior year is incredible,” said Murphy. “(The Oakland County meet) put me in a really good place, and that kind of gave me some extra confidence that I carried over the rest of the season into today.”

“Last year winning the 200 free wasn't expected. I won by .01 last year. This year I was expected to go out and defend it. I don't think I had my best race. It didn't go exactly how I wanted it to, but I still won,” Carl said. “I wanted to go out a state champion again, and that was my ultimate goal.”

Grand Rapids Forest Hills Central sophomore Henry Schutte won the 50 freestyle (20.38) by less than three tenths of a second. Then he came back to win the 100 freestyle (45.27).

“I was runner-up in the 50 free last season, so I thought I’d have a chance this season,” noted Schutte. “I thought I had a great race. I wasn't sure how it would turn out being a sophomore. I just love the sport and love to (compete).”

Saline’s foursome of Matt Lau, Josh Willwerth, Greg Winning and Daniel Keith won the 200-yard freestyle relay in 1:25.01, with Keith pumping his first after he surged past Brother Rice down the stretch. He credited hard work coupled with divine influence for the Hornets’ relay win.

“We knew we’d have a chance in that relay. It was wide open and we pulled it off,” said Keith. “It really boils down to us stepping up and it’s all to the glory of God. He’s the one who decides who wins these races. We’re thankful to him that we won a relay state championship like some of the other great Saline swimmers before us.”

The Eagles posted their highest D-1 Finals finish and did so with only one senior who scored points.

“I was new this year, and we asked the boys to change everything. At the beginning of the season we never anticipated this,” said first-year Skyline coach Maureen Isaac. “They came a long ways this season with such a young team. I don't think anyone would have thought we’d take second here with (mostly underclassmen). We had a senior place 15th in one event and swim on one of our relays. Everyone else will be back next year.”