MARQUETTE — When Denise Mayer began her duties as co-head swimming coach at Sault Ste. Marie High School last fall, she didn't really know what to expect from the Blue Devils.

“We started with just a handful of swimmers,” she said. “We had lost a lot of seniors through graduation. We told the kids this would be a building year.”

The Sault boys, however, gained their first Upper Peninsula title in a decade Saturday with 258 points. Not bad for a building year.

“This is a big thing for us,” said senior Bryan Colborn, who won the 100-yard butterfly event in 1:01.28.  “I’m just very proud of our team. We put forth the effort in practice and it paid off today. I could see this building (during the season). Deep down I had a feeling this would happen. I also had the feeling we were all on little bit of a mission during the trip over here.”

Things began on a promising note for the Blue Devils Friday when they grabbed three of the top five places in diving.

“We started very strong with our diving,” Mayer said while trying to dry off after jumping into the pool in celebration with her team. “I think that set the tone for the weekend. That encouraged our guys to continue our momentum. We didn’t have many firsts, but we had enough depth to cover the points. We finished the season with 18 boys. Hopefully, this will help increase our numbers next season.”

Junior Nick Chevillot added a second in 200 freestyle (2:01.26) and helped the Blue Devils take second in the 400 freestyle relay.

Mayer, who shares the head coaching job with Kelli Vanderbaun, was quick to credit assistant coaches Jamie Laurence and Dillon Mayer for part of the team’s success.

“They’re a very integral part of the team,” she said. “They’ve done a variety of tasks when needed. They’re part of the glue that holds us together.” 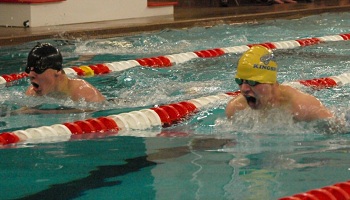 The Redmen had an unfortunate turn of events in Saturday’s first race (200 medley relay) when the officials ruled Rotundo left too soon at the beginning of his leg, resulting in the team’s disqualification.

“Nathan is the most regimented and disciplined swimmer we have,” said Marquette coach Nate McFarren.  “That was an unfortunate beginning, although I don’t want to take away any of the thunder. Each of our kids did their job, and they did it well.”

McFarren was especially pleased with the effort of the team’s lone senior Luke Sides, who was runner-up in 100 backstroke (1:03.07) and third in 100 freestyle (52.82) and helped the winning 400 freestyle relay.

“For Luke, this was a great ending to his career,” said McFarren.

The Redmen swam without freshman Sam Williams, who was out with the flu.

“Sam is our top butterfly and No. 2 breaststroke swimmer,” said McFarren. “He would have gotten us 30 points.”

“This season has gone well,” said Johnson, who plans to enroll at Michigan Tech this fall. “I’ve made more friends from other teams. It’s a lot of fun competing with people I know. Daniel has been pushing me all year. We’re so close and we’re both seniors. We’re in the same position. It’s not a rivalry. It’s just fun competition.”

“I was just zoned in this morning, preparing for the races,” said DeClerck, who hopes to swim in college, but unsure of where he’ll attend classes this fall. “I’m happy with my times this season. Overall, this is a great meet. I’m very happy to be a part of this with all the great swimmers throughout the U.P.”