YPSILANTI – One by one, members of the Birmingham Seaholm boys swimming and diving team approached coach Tom Wyllie – who was completely soaked after a post-meet dip in the pool – and greeted him with a big hug.

When one swimmer offered a handshake, Wyllie insisted on a hug.

They were soaking in the MHSAA Lower Peninsula Division 2 champions after a dominating performance Saturday at Michael H. Jones Natatorium on the campus of Eastern Michigan University.

Seaholm started the meet with an emphatic statement – an LP Division 2 Finals record performance in winning the 200 medley relay – and ended with a huge exclamation mark – another LP Division 2-record performance in winning the 400 freestyle relay. In between, Seaholm won the 200 freestyle relay, and junior Jack Russell captured the 200 IM for the Maples’ only individual championship of the meet.

The Maples finished with 357.5 points in a complete domination of the meet as Dexter was second with 203. They also won the MHSAA championship in 2011 and were second in 2012 and third in 2013.

Seaholm had 10 swimmers qualify for at least one individual event, and nine swimmers qualified in two. That all happened in an outstanding effort during preliminaries Friday.

“I’ve never seen anything like that in my 16 years of coaching,” Wyllie said of Friday’s performance. “We were very deep across the board; we had swimmers qualify in every event, and we qualified four 100 freestylers in the top eight – and only had one individual state champion.

“That goes to that team concept – it takes a team to win.” 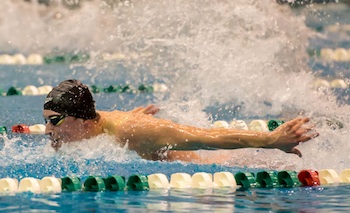 “That relay probably would not have been that fast if it had not been for Grosse Pointe South,” Wyllie said. “They were right there with us neck and neck and pushing us really hard. We walked away with the win and a record on top of that. It just set the tone for the rest of the day.”

The individual highlight of the day for Seaholm came in the third race – the 200 IM – when Russell won in 1:52.10 – more than a second better than his time in the preliminaries. Robbie Zofchak of Dexter was a close second in 1:52.28.

“I had no clue if I won,” Russell said. “When I touched, I just looked at the board and saw first. I thought he caught me on the end.

“My coach told me that I would have him on the breaststroke, but he’ll be gunning for me on the freestyle. When I looked over in the last 25, I saw he was catching me off the turn. I just put my head down, didn’t breathe and touched the wall and hoped for the best.”

Russell also was third in the 100 breaststroke and swam the second leg on the winning 200 medley relay team.

While Seaholm had only one individual champion, it had several standouts.

With the team championship secure, Seaholm went into the final event – the 400 freestyle relay – on a mission. Crosstown rival Birmingham Groves set the meet record of 3:05.63 in 2011, and in the preliminaries Friday, Seaholm was in the neighborhood with a 3:06.99.

They weren’t to be denied in the final, with Anderson, Shaben, Nick Ross and Hernandez teaming up to win in 3:05.13, shaving a half-second off the LP Division 2 record.

“The state record has always been one of our goals,” Shaben said. “The entire season we’ve been eying it. Two seniors, Nathan Anderson and me, we’ve really wanted to end our season with that record.”

While Seaholm dominated, there were other standouts as well led by Holland senior Thomas Rathbun. He successfully defended his championships in both the 200 freestyle and the 500 freestyle. His winning time of 4:28.75 in the latter was nearly 10 seconds ahead of the runner-up, and he won the 200 in 1:38.74.

Both times were better than his winning performances from 2013.

“I feel like that was the most important part,” Rathbun said of his times. “The placing doesn’t mean that much to me – it’s great to be first – but to me it’s more about the times and if I improve on myself.”

Rathbun also was rebounding from a difficult situation last summer.

“Coming into the season, I wasn’t sure how it was going to go,” he said. “I had an off-summer dealing with some mono and bronchitis, so it was a slow start.

“I worked through some stuff, and now it feels pretty good.”

The other successful defending champion was junior John Vann of Battle Creek Lakeview, who repeated in the 100 butterfly. His winning time of 49.23 was better than his 50.83 in 2013.

“It feels really good,” said Vann, who also was second in the 200 freestyle. “I was definitely more confident this year just knowing I had a state championship under my belt, and it just felt really good that I could compete with everybody and just get out there and race them.

“I took it out a lot faster than Friday, and it hurt a lot more in the end, but it was definitely worth it.”

White Lake Lakeland senior Will Walker, who finished second to Vann in the 100 butterfly, won the 50 freestyle in 20.83 seconds, while Nick Leshok of North Farmington won the 100 freestyle in 46.03 seconds.

The diving portion of the meet went to Swartz Creek senior Jason Maxwell, who outdistanced the field with 437.50 points as runner-up Fay of Seaholm had 375.20. Maxwell had a healthy lead for his final dive – a reverse double somersault in the tuck position.

However, the day and the meet belonged to Seaholm.

“Everybody played their part – the hugs – we’re one giant family,” Wyllie said. “When family cares about each other, you don’t want to let each other down. Everybody does their part.

“My son was on the last state championship with me. He was a senior and a captain, so that was a different feeling. I was wondering how this one would feel, and it feels like I have 45 sons; it’s just incredible. Both state titles are unique in their own way.”

PHOTOS: (Top) Swimmers launch for a leg of a relay Saturday at the Lower Peninsula Division 2 Final. (Middle) A swimmer surges ahead during his race at Eastern Michigan University. (Click to see more from High School Sports Scene.)