JENISON – It seems a stretch to compare winning a state swimming & diving championship with an elephant, but it makes perfect sense to Tom Wyllie.

In fact, that's how Wyllie explains how his deep Birmingham Seaholm team won Saturday's Lower Peninsula Division 2 meet despite gaining only one first place in an event. Seaholm finished with 267.5 points to 222 for runner-up Grosse Pointe South.

"We have a lot of depth, and it's a team sport," said Wyllie, whose Maples won their fourth team title in 10 years. "I've said this a lot to the kids over the years, that when it looks like there is an obstacle, I ask them 'How do you eat an elephant?' The answer is you take one bite at a time. Everyone took a big bite of the elephant today. It was truly about a team effort and camaraderie."

Detroit U-D Jesuit was third with 180 points, Ann Arbor Skyline fourth with 179 and Dexter fifth with 153.

Seaholm's only first place actually came on Friday when Kam Liberman won the diving with a score of 523.15. One of 12 seniors on the team, Liberman agreed with Wyllie that depth is directly tied to the team's success.

"It's a team sport, it's not about individuals. We have lots of depth, and I think we swam our best of the season. Everyone made a lot of drops in time," said Liberman, who was seeded No. 1. "My goal was to hold out. The No. 2 guy was never far away, and I just wanted to stay consistent." 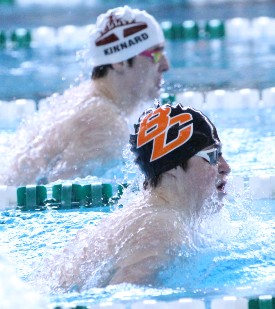 The next highest Seaholm individual placer was Tom Girdler with a second in the 100 breaststroke while Cami Wilson was third in the 100 butterfly. The 200 and 400 free relays both took thirds.

Wyllie said his present team differed from last year's club which would have been in the hunt for a title if not for the interruption of the COVID outbreak.

"Last year we would have been happy being in the top three," he said. "Farmington was a beast last year, and we expected them to take the title."

Bruce, who was seeded eighth, said he couldn't have done any better.

"I was a little nervous, but I had a great taper and dropped a lot of time," he said. "It was pretty much the best I could do."

Senior Clayton Kinnard of Dexter won the 200 free (1:39.72) after taking last season off. He was a top-16 Finals placer as a freshman and sophomore in the 200 individual medley and 100 backstroke before he opted not to compete last winter.

"I used to put pressure on myself to do good; people expected me to do well," he said. "I stopped swimming because I felt like I was swimming for other people. But my friends wanted me to do it this year for fun, and I did have a lot of fun. It's the most fun I've ever had. I just let loose, and it was the best I've ever swam. I'm proud of this."

Forest Hills Central senior Avery LeTourneau won the 100 butterfly (49.85). He previously had finished eighth in the butterfly as a sophomore. He was seeded fourth this time, but thought a title was possible. 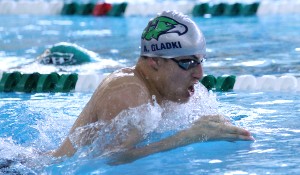 "I was looking to win, I thought I definitely had a shot. I thought I would be right there," said LeTourneau, who said not being able to compete for a title a year ago was disappointing but a motivator. "I was walking out of school when I found out things were cancelled. We had worked hard for months. Now it feels like we've come full circle. It was 100 percent worth the wait because this is awesome. It was great to see it through."