YPSILANTI – The groundwork was laid Friday.

But the celebration was years in the making.

At the conclusion of the MHSAA Lower Peninsula Division 1 Boys Swimming & Diving Finals at Eastern Michigan University, Ann Arbor Skyline coach Mo-Jo Isaac performed a near-perfect back flip off the 3-meter diving board – something she’s been doing for years when her teams accomplish something special.

The occasion certainly called for the coach to take a dip in Jones Natatorium Saturday afternoon. The Hawks cruised past the competition, scoring 274 team points to top the field and bring home the first MHSAA championship in program history.

“Whenever my girls teams (at Skyline) would accomplish a milestone, or something big would happen, that’s kind of what we do,” said Isaac, who’s in her second year coaching the boys program. “Today, I had kind of forgotten about it, but a bunch of our girls were here to cheer on the guys and they were like, ‘No, Coach Mo-Jo, you’ve got to jump.’ ”

Skyline picked up wins in five of the meet’s 12 events, with senior David Cleason leading the way with a pair of individual titles. He was tops in the 200-yard individual medley, winning in a time of 1:49.81. He also bested the field in the 500 freestyle, where he edged out Livonia Stevenson’s Ben Rojewski with a time of 4:30.50.

Cleason’s teammate, Michael MacGillivray, was second in the 200 IM, while winning a title of his own in the 100 breaststroke (55.01). Both Cleason and MacGillivray were members of the team’s winning 400 freestyle relay, with senior Samuel Jyawook and junior Kyle Tschannen. Their winning time was 3:04.99, beating out runner-up Grand Rapids Forest Hills Central and third-place Harrison-Farmington Unified.

“It’s a dream come true,” said Cleason, who accounted for 40 points by himself and helped his team earn 50 more in the two relay events he swam. “Me and Michael (MacGillivray) have been dreaming about winning that 4x100 free relay and winning the team title for so long and now that we’re seniors, doing it and winning it in our last swim meet, it’s perfect.”

“I feel like we won the meet yesterday, even though no one scored a point,” Isaac said. “We talked about doing it as a team, and we couldn’t do it if everyone wasn’t there for each other. We were on fire yesterday and we qualified really well.” 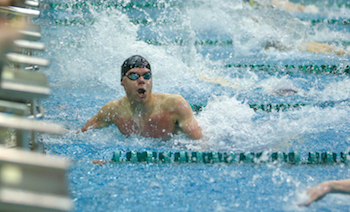 Holland West Ottawa, which entered the Finals ranked No. 2 in the state behind Skyline, lived up to its ranking by finishing second with 207 points. The Panthers won two of the three relays and saw junior Derek Maas capture the 100 backstroke title. Maas, who finished runner-up in the event a year ago, left nothing to chance Saturday, winning in a time of 50.23, better than a second ahead of runner-up Parker Wasielewski of Livonia Stevenson.

Forest Hills Central junior Henry Schutte repeated as champion in both the 50 and 100-yard freestyle events. His time of 20.01 in the preliminary Friday set an all-Division MHSAA Finals record in the 50. He nearly duplicated the feat Saturday, finishing with a winning time of 20.04. Zeeland’s Austin Mills was second in the 50, while Ann Arbor Pioneer’s Adam Orringer-Hau was runner-up to Schutte in the 100.

“I am beyond happy with everything I did today,” said Schutte, who helped his team to a fourth-place finish. “I have to thank my coaches, my family, my teammates, shoot, even the people in my races. We’re all pushing each other to do our best, and every race is so fun. I love it.”

Four-time reigning team champion Birmingham Brother Rice had its streak end, but not without a fight. The Warriors finished third, behind Skyline and West Ottawa, with 154 points. Senior Alex Margherio captured the lone individual title for Rice, winning the 100 butterfly in a time of 48.43. Howell’s Henry Bauer was second in a time of 50.09.

PHOTOS: (Top) Skyline's Henry Schirmer rotates through one of his dives on the way to repeating as LP Division 1 champion Saturday. (Middle) Grand Rapids Forest Hills Central's Henry Schutte looks to the scoreboard as the other competitors in the 50 finish their sprints. (Click for more from HighSchoolSportsScene.com.)