MARQUETTE – Going into Saturday’s Upper Peninsula Swimming & Diving Finals, it had been three years since the Marquette boys finished on top.

To end that streak, the Redmen would need their underclassmen to start fast on the blocks – and Marquette’s youth definitely did their part.

The Redmen rolled to the team win, racking up 344 points, well ahead of second place Sault Ste. Marie (227). The Blue Devils edged Houghton by eight points to get the runner-up spot, while Kingsford was fourth with 176.

Marquette’s depth also played a role in the victory as it had only two event winners with Liam McFarren taking the 100-yard freestyle and the Redmen winning the 200 free relay.

“With a crew that’s mostly freshmen and sophomores, this win means even more honestly,” Marquette head coach Nathan McFarren said. “It was a pretty impressive performance for this group of guys, and we had so much depth too. It was pretty incredible to watch these guys progress throughout the year, and I can’t wait to see it in four years.”

In regard to the Redmen’s depth, McFarren said his team is no longer strictly swimmers, but now includes a wide variety of athletes.

“We’ve lost a lot over the past few years, which has cost us, but this freshman class is huge,” he said. “It’s the biggest freshman class I’ve ever had, and it’s not all guys that have been swimming their whole lives. It’s football players and multi-sport players, so it’s pretty cool.” 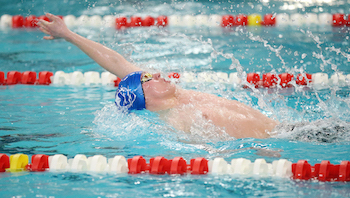 The Sault had a big day in the pool as it finished first in the other two relays (200 medley and 400 free), while Andrew Innerebner and Morgan Burd both won two events. Innerebner won the 50 free and 100 butterfly, and Burd finished on top in the 200 individual medley and 100 backstroke.

“Sometimes the kids just shock you,” Blue Devils head coach Steve Habusta said. “We expected great things, but I don’t think we expected this great of things. The boys were swimming lights out. Everybody is stepping up and doing it all through tragedy. … One of our swimmers lost his mom, so for our kids to step up and rally behind him, I think it’s a special day for everyone.”

Houghton notched three wins at the meet with Archer Olson earning victories in the 200 free and 500 free, while Davin Evans won the 100 breaststroke.

Even though the Gremlins were unseated as U.P. champs, head coach Erik Johnson was pleased with how the day went overall.

“When you come here with five boys qualified and eight or nine girls, it’s tough to get points,” he said. “But they all did really well. They all swam well, and I couldn’t be more proud of them. Our boys, we only graduate one senior and we’ll miss our girls seniors, but kids are ready to step up so we’re excited.”

On Friday night, Ishpeming Westwood’s Brock Sundberg repeated as the 1-meter diving champion with a score of 205.15. This was the third straight year a Patriots diver won the title.

PHOTOS: (Top) Liam McFarren was one of two individual event winners for team champion Marquette, and here he swims the winning 100 freestyle. (Middle) Sault Ste. Marie's Morgan Burd swims to the championship in the 100 backstroke. (Photos by Jarvinen Photos.)