They’re going to be talking about the final second of this swimming & diving season for a long time at Holland West Ottawa.

By sixth hundredths of that second, the Panthers edged Detroit Catholic Central to finish first in the 400-yard freestyle relay at the Lower Peninsula Division 1 Finals at Holland Aquatic Center. West Ottawa led DCC by only two points heading into that final race, and the 40 additional points for the win – compared to 34 for DCC as runner-up – clinched for the Panthers’ first MHSAA championship in this sport since 1971.

That would be plenty to earn West Ottawa the MHSAA/Applebee’s “Team of the Month” honor for March. But it’s just the finish of the story.

The Panthers also had come in runners-up last season and in 2015. They’ve won 47 straight dual meets, stretching back more than five seasons, and six straight league titles. West Ottawa also won all of its invitationals this winter.

But claiming the ultimate championship brought an even greater amount of significance to those achievements.

“This year, this was the expectation,” Panthers coach Steve Bowyer said. “Going into that last relay, there was a lot of pressure because this was a culmination of everything these seniors had been through the last four years. Obviously, as a coach, you’re just sitting there hoping it’s going to go your way, because of what the expectation has been.

“For this group of boys, even if they’d gone in and swam the way they did and gotten beat, it’s still a successful season. But this was the one meet these guys had been working for because we’ve gotten the previous conference championships and invite wins, and after finishing runner-up twice the last 4-5 years, this was the goal for this group.”

The Panthers secured the team win in part with first places in the 100 butterfly and 200 individual medley from senior Derek Maas, the 200 medley swam by Maas, senior Khadin Soto, junior Gavin Temple and freshman Kevin Maas and the 400 with junior Jamahl Hogan and senior Sam Smith leading off for Maas and then Soto.

The medley relay’s time of 1:31.01 was the third-fastest in MHSAA Finals history, all classes and divisions included. Maas’ IM time of 1:46.70 also ranked third in that event, and Soto’s runner-up time in the breaststroke of 55.33 ranked eighth on the all class/division list for that race. Maas won the butterfly in 48.02 and holds the West Ottawa school records that race and the IM, as does Soto in the breaststroke. The 200 medley relay also set a school mark this season, topping a record board that surely ranks as one of the most impressive in the state – consider that during this decade alone, West Ottawa had 11 individual and five relay Finals champions. 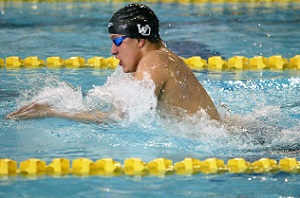 But the team title was another level of accomplishment.

The feeling on this run was different than when Bowyer led the West Ottawa girls team to the LPD1 title in Division 1, because of the great expectations. That girls team was looking for a third or fourth-place Finals finish but pushed into contention with a big first day.

Keep in mind as well that West Ottawa isn’t the only swimming power, much less MHSAA champion, in its community. Holland Christian won its second straight LPD3 title last month, and West Ottawa won by 35 points when those two met in December. West Ottawa also took a 46-point dual win over neighbor Zeeland, which went on to finish 12th in LPD1, and a 56-point dual win over Holland High, which finished 16th in LPD2.

All set the stage for the Panthers’ Finals run, and last-second win, which has been replayed during post-meet get-togethers, a school assembly, and when Bowyer has had some moments to himself as he’s watched it, said jokingly, “probably more than I should.”

“Being the number one-ranked team all year long, and to have some of the early success we had and put up the times we did, going into that meet, I felt pretty confident,” Bowyer said. “We felt it was going to be our year. We’d had good teams in the past. But a few years ago we ran into Brother Rice which was phenomenal, and Ann Arbor Skyline last year had a great year. This year, we felt it was our year.

“Detroit Catholic Central, I felt, had a phenomenal meet, made things closer than a lot of people expected, and I definitely tipped my hat to them. We feel fortunate to be on the winning end on that touch.”

PHOTOS: (Top) Holland West Ottawa celebrates its first MHSAA Finals championship in boys swimming & diving since 1971. (Middle) Khadin Soto was among the team’s stars during the LPD1 meet. (Click for more from HighSchoolSportsScene.com.)