HOLLAND – After chasing an elusive MHSAA Finals tennis championship for years, what would a few more hours waiting matter for the Allegan boys tennis team?

With all but the No. 3 singles semifinals and final completed Saturday afternoon at the Lower Peninsula Division 4 Finals at Hope College, Allegan and Kalamazoo Hackett Catholic Prep were tied for first place with 21 total team points apiece. The No. 3 singles semifinals were moved to the evening, with a match between Hackett and Ann Arbor Father Gabriel Richard set to determine if Hackett won the title outright or shared with Allegan.

For some six to seven hours Saturday afternoon, the Tigers had to anxiously wait for their fate to be determined by a pair of players from a team other than their own. The coaches kept the team busy with lunch and a trip to the BAM! Entertainment Center, where the team played laser tag to burn off the nervous energy.

While the coaching staff kept the team occupied, the anxiety was still prevalent.

“It was very high stress,” said Walker Michaels, one of five seniors on the team. “It was a lot of stress waiting all day to find out if we would win a state championship or not.”

Allegan’s nerve level was heightened considerably shortly after the semifinals began. After Hackett jumped out to a 3-0 lead in the first set, Gabriel Richard senior Rafid Farjo quickly became Allegan’s favorite tennis player not wearing orange and black when he battled back to win the first set. Farjo then made every Allegan tennis player’s dream come true when he won the second set, sending him into the final at No. 3 singles and Allegan to the victory stand where the Tigers shared the team championship trophy with the Hackett team that it previously defeated for the Regional championship.

“This is the first time that Allegan has won a state tennis title, boys or girls,” said Allegan co-coach Seth Arthur. “These guys have worked their tails off. They’ve played with the pressure of being number one in the state all year. To win the first tennis title in school history is an unbelievable feeling.”

For Allegan seniors Tim Lyon, Owen Clearwater, David Roark, Noah Festerling and Michaels, the wait was more than worth it.

“This was everything we worked for and dreamed of,” Lyon said. “All the hard work and every practice paid off.”

Winning required a total-team effort. Freshman Eli Festerling was Allegan’s lone flight champion as he captured the title at No. 4 singles.

“I knew it was going to be really hard,” Festerling said. “I played (finalist Gerry Sherer of Grosse Pointe Woods University Liggett) earlier this year, and he has become a lot better. He was a lot more confident, and I was not prepared for that in the first set. I kept the pace up, and that made the difference for me.” 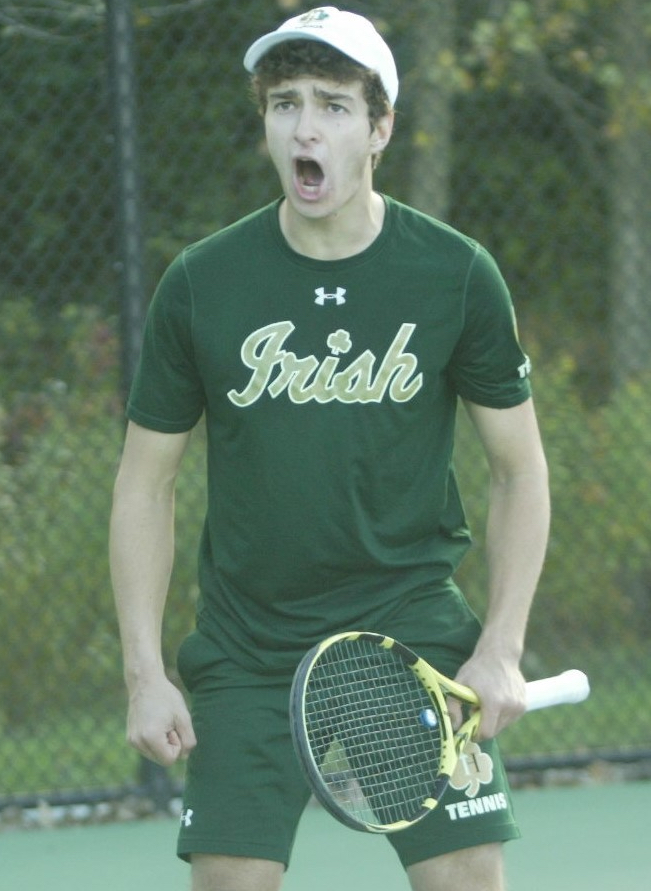 Kalamazoo Hackett earned a share of the Division 4 title without winning a flight championship. Instead, the Irish utilized the same formula that Allegan used as the total-team effort produced the needed points.

The Finals title was the first won by Hackett since the Irish tied Grosse Ile for the Division 4 title in 2005.

This year’s Finals were a wide-open competition from the opening volley to the last serve. Liggett finished just one point behind Allegan and Hackett, while Gabriel Richard, Grand Rapids NorthPointe Christian, Grand Rapids Catholic Central and Traverse City St. Francis all finished within five points of first place.

“There were just a lot of good teams spread out in Division 4 this year,” said Hackett coach Aaron Conroy. “We had a heck of a season. The guys worked real hard right from the start. It feels great to do it. The margin for error was very small, and we had everybody on the team step up.”

The parity in Division 4 was evident by the number of schools that won flight championships. Liggett was led by William Cooksey, who defeated Gabriel Richard’s Ian Sood at No. 1 singles for his third straight title at that flight. Gabriel Richard’s Tommy Heegan won the title at No. 2 singles, and St. Francis’ Cody Richards won at No. 3.

In doubles action, the St. Francis duo of senior Brendan Chouinard and sophomore Ben Schmude claimed the title at No. 1 doubles.

For Chouinard, it was the second-straight year he was part of a doubles champion.

“We came out with a lot of intensity,” Chouinard said. “We jumped out to a 5-0 lead and won that first set. We got down in the second set, but we picked it up and won it.”

Playing with a new partner in Schmude took a little getting used to, but once the duo became familiar with each other they took off this season.

“I knew that once we got used to playing together that no one would beat us,” Schmude said. “We do a good job of picking each other up when we get down.”

Like Allegan and Hackett, the Gladiators had to wait the long period Saturday afternoon to play in the other No. 3 semifinal.

“It was a long day,” said St. Francis coach Dane Fosgard prior to the conclusion. “We were up at 7 a.m. for breakfast, and the final match will be done around midnight. We’re used to it. We travel a lot. We came down here for a tournament at Hope College at the start of the season and played all day and slept on the courts at night. We will spend the night here. It’s fun for the team.”

A pair of Grand Rapids-area teams claimed the three other doubles championships. NorthPointe won both the Nos. 2 and No. 3 doubles titles. Elan Bosma and Derek Diepenhorst teamed up to win at No. 2, with Chase Berends and Sam Bradley winning at No. 3.

At No. 4 doubles, the Grand Rapids Catholic Central team of Cameron Beachler and Ben English came away with the title.