By Chris Stevens
Special for Second Half

MIDLAND – All season long, the Bloomfield Hills Black Hawks have had a target on their collective backs as the state’s top-ranked tennis team in Division 1.

They handled the pressure well during the fall’s regular season, but there was one big hurdle left to clear at this weekend’s MHSAA Finals at the Greater Midland Tennis Center.

Black Hawks coach Greg Burks kept the message to his team simple and clear: Don’t focus on the rankings; do your best and everything will take care of itself.

And that’s exactly what happened Saturday, as the Black Hawks won the school’s second Lower Peninsula Division 1 title in the past three years, edging Troy 30-28 in the two-day tournament. Ann Arbor Huron placed third with 22 points, Birmingham Brother Rice had 21 points and Ann Arbor Pioneer had 19 to round out the top-five scoring.

The Black Hawks, who finished second in LPD1 a year ago and tied for the title two years ago, started the season ranked No. 1 and finished the season that way, as well.

“I tried to not have the guys look at (the rankings) because there is a target on your back and you have to play completely different,” Burks said. “When you play somebody, they don’t have anything to lose. … It makes it a little tougher because they come out swinging.

“(My team) did a very good job of just working to get better.”

Burks said his team was motivated after falling short a year ago at the Finals.

“Everybody worked extremely hard in the offseason,” he said. “Every practice was intense and had a lot of energy. All the kids wanted it, and it showed. They worked really hard. I give my guys all the credit. They played unreal.”

Bloomfield Hills won fight titles at No. 3 singles, No. 1 doubles and No. 2 doubles. The No. 2 doubles team of Vik Chakrabortty and Chaz Blamo, seeded second in the flight, locked up the team title with a hard-fought 3-6, 6-3, 7-6 win over top-seeded Niko Mamatas and Riley McNulty of Birmingham Brother Rice.

When that long match ended, Bloomfield Hills team members poured onto the court to celebrate. 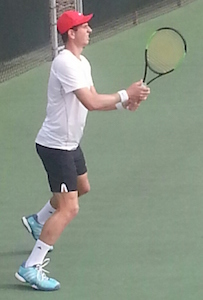 Meanwhile, at No. 3 singles, Constantin Hemmrich of Bloomfield Hills posted a 6-0, 6-0 win over Clarkston’s Jacob Burkett in the finals. At No. 1 doubles, Cade Burman and Sebastian Burman secured another title for the Black Hawks with a 6-4, 1-6, 6-1 victory against Sam Schwartz and Jack Brockhaus of Brother Rice.

At No. 1 singles, Troy senior Steve Forman was dominant as he captured a second straight championship. He lost only five games the entire tournament and did not lose a set.

Forman, who’s headed to the University of Michigan to play his college tennis, defeated Andrew Zhang of Bloomfield Hills 6-1, 6-1 in the finals. Both are hard-hitting left-handers.

“I really served well and hit my spots. That’s really what I was trying to do … and do what I could in (returning the ball),” Forman said of his keys to victory.

Even though he was defending his title, Forman said that was not a huge motivating factor for him. He wrapped up his senior season with a 13-0 record.

“It’s a new year and new people,” he said. “I definitely felt like I was the top player and I wanted to go out and win.”

Forman, who lost in the semifinals as a sophomore, enjoyed the success he had in high school.

“I really played my best tennis in high school,” Forman said. “I had some tough matches, but overall, I played well in a lot of big matches. I’m satisfied with what I was able to do here.”