And the Portage Central boys tennis team is benefiting from some very good fate – in this case, a chance meeting between coaches Peter Militzer and Erik Anderson.

Both have won Lower Peninsula Division 2 championships, but with different teams. Militzer has two with Portage Central and Anderson two with East Lansing.

They first met at the MHSAA Finals in 2008, which East Lansing won.

“We helped him win it,” said Militzer, whose team tied for fourth that year. “He came up and thanked me because my singles players beat singles players from Rochester Adams that propelled him to the title.”

Six years later, this could be the season the two win a championship together.

Portage Central is ranked No. 1 this week in the coaches association Lower Peninsula Division 2 poll. The Mustangs are loaded with talented veterans and depth at both singles and doubles – and on the coaching staff as well.

The year before their chance meeting, in 2007, Militzer and Anderson both won but didn’t share MHSAA titles. Portage Central won in the spring and East Lansing in the fall, as Lower Peninsula boys tennis made the transition from spring to fall over that calendar year.

After the 2008 Final, fate brought the two coaches together again when Anderson took a position with the Greater Kalamazoo Area YMCA, where he is now director of tennis operations. Militzer is director of healthy living and membership.

Anderson, who also coached two years at DeWitt, said it’s not only the sport but the kids who keep him motivated to coach high school.

“Tennis is a sport that’s individual, and in high school you can make it a team sport,” he said. “That’s what’s really unique about tennis. A lot of people look at it as an individual sport, and it’s a way to bring a group of guys together and realize that what you do also affects somebody else within the team.

“It also gets them ready for college if they’re looking to go on to college because it becomes more team aspect there, too.”

Militzer, who has coached the Mustangs for 23 years, asked if Anderson would be interested in co-coaching at Portage Central. After a year of commuting from Kalamazoo to East Lansing to continue coaching the Trojans, Anderson jumped at the chance to make the switch.

They also have a junior varsity coach with a ton of experience: Nancy Martin is a former Portage Northern coach.

“Between Nancy, Erik and myself, we all have such different coaching styles that when we get to our big tournaments we can mix or match depending on the player’s needs, their mental state at the time, how the match is going,” Militzer said.

“I’m more the mental coach, trying to keep them in a positive state of mind. Nancy is a great tactical coach. She’ll see the weakness in the other player right off the bat. She does that as well as anyone in the state. Erik is a blend of those two and he’s really a great motivator.”

One advantage for the team, or disadvantage depending on a player’s perspective, is that Militzer also is an umpire for the USTA Boys 18-16 National Championships, tournaments at the Y and some ITA competition for Western Michigan University and Kalamazoo College.

“As tennis coaches, we are the officials at the match,” he said. “Regionals and State, there are USTA officials so then we back off.

“I can say that I am definitely harder on our own players than I am on the other teams. So if you’re an opponent and you say something, I’ll tell you know not to do it. But our own player, the team’s running the second time it happens.”

Portage Central has six seniors, but just one, Ben Orwin, has cracked the singles lineup – and that’s not because they’re stacking the doubles deck.

At Portage Central, Duo is competing at No. 1 for the second year and Guy at No. 3. Sophomore Camilo Bautista rounds out the singles lineup.

“Our teams have always done best when we’ve had good leadership, and we have three captains and neither Duo or Guy are captains,” Militzer said. “Because of their experience, players will look up to them anyway, so it’s one more layer of leadership.”

Duo’s record last year was 27-5 with four of those losses to Portage Northern the-senior Stew Sell: dual, conference, regionals and MHSAA Finals. The other was to Grosse Pointe South’s Nick Paolucci. So far this year, Duo is undefeated.

“Bill’s USTA experience is invaluable,” Militzer said. “He’s a leader even though he’s a sophomore. He’s just a great talent. Everyone looks up to him.

“I think playing USTA helps with his nerves a little bit when he plays big players because he’s seen them before.”

“It really feels nice to be part of this team. part of this community and be surrounded by friends,” he said. “With high school they make things a lot more fun. You have all your teammates there supporting you. They have food here, which is a huge plus. It’s just immeasurable. 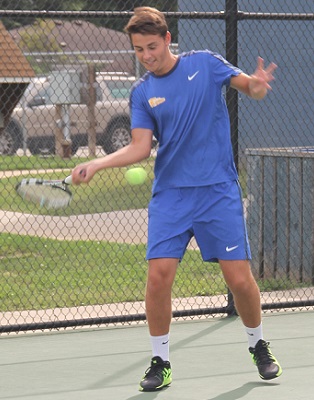 “I’d love to help our team get a state title. I’d love to be a supporting teammate, play my best out there, have fun and have all my teammates have fun and come together as a team in the end and just have a blast.”

Said Orwin: “Duo’s a really strong player. He helps a lot. Just because he’s a sophomore doesn’t mean he’s not experienced. He’s played a lot of tennis in his life.”

Orwin made it to the finals at No. 2 singles last year before losing to Midland Dow’s Colin Angell.

“Ben is a three-year captain, which is pretty unusual,” Militzer said. “He leads by example. He’s not very loud but his game speaks for itself. He’s a really good on-court leader.”

When Orwin was asked what it would take to beat Duo in a challenge match, Bautista jumped in, laughing, “ A whole lot of praying.”

“The team atmosphere takes the pressure off a little bit,” he said. Compared to USTA events, “The intensity level is a little less with a team as far as being pressured.”

“Lucas is going to be a great player,” Militzer said. “Even though he’s only a freshman, he’s very, very good right now. He’s a nationally ranked player in (USTA boys) 14s. He’s only 13 but he’s big.”

Bautista said he has one regret from last year.

“I was an alternate on varsity,” he said. “Last year, I tried out for singles, but I didn’t make it because Joey Liu took the 4 singles spot. I didn’t want to play doubles so I went down to JV.

“I’ve never been a big doubles fan, but now that I look back, I regret it. I would have rather been on the varsity team and help them do maybe better.”

Militzer said Bautista is a “great No. 4 player.”

“Camilo battles,” he said. “He doesn’t really have any weaknesses and that’s unusual at 4 singles. He barely lost out on No. 4 singles last year.”

With five seniors, the doubles lineup is filled with experience, and there is at least one senior in each pairing.

Senior Kento Hirakawa and Raedy play at No. 1.

“Cameron played 1 doubles last year and lost in the semis,” Militzer said. “He and Kento haven’t lost to anyone in Division 2 this year. They have a couple Division 1 losses. They’re a very, very good team.”

The No. 2 duo of Liu, a senior, and Tandon have just one loss. Senior Elijah Lentz and sophomore Cody Lewis play at No. 3, and senior Kyle Wang and junior Andrew Beering at No. 4.

Orwin said he would like nothing better than to end his high school career with a team championship. The Mustangs finished his freshman and junior seasons in third place in Lower Peninsula Division 2, sandwiched around an eighth place when he was a sophomore.

“We’ve got to come together as a team when it really counts,” he said. “To go out with a championship would be amazing.”