CLARKSTON – While striving for his first MHSAA Finals title in one sport, Luke Baylis is looking to be a part of a repeat championship in another.

A senior at Clarkston High School, Baylis is head of the powder puff committee for his class, a job that entails collecting money, setting the rules and overseeing the team as it goes for a second consecutive win.

“As juniors they beat the seniors last year,” said Baylis, who served in the same role for the junior squad a year ago. “They’re a pretty solid team. Hopefully they’ll win again.”

As the powder puff team pursues school bragging rights, Baylis is in the midst of a statewide quest.

An all-state tennis player his first three years of high school, Baylis is looking to cap off his career with a Lower Peninsula Division 1 individual title at No. 1 singles after contending for the flight championship the last two years.

Baylis has lost in the No. 1 semifinals both of the last two years, falling to Troy’s Steven Forman two years ago, 6-0, 6-0; and Bloomfield Hills Brother Rice’s Jarreau Campbell in three sets last year.

As a freshman, Baylis lost in the championship match at No. 2 singles to Andrew Zhang of Bloomfield Hills, the title winner at No. 1 singles in 2018.

With Campbell and Zhang graduated, this could be the time for Baylis.

“I definitely think there is a pretty big opportunity,” said Baylis, who carries a 4.1 grade-point average. “I’m definitely feeling a little more pressure, but the pressure is good at the same time. It’s not bad pressure.”

Baylis said his parents have told him that he has had a “racquet in his hands since he was a baby,” but he started playing competitively when he was 6 years old. 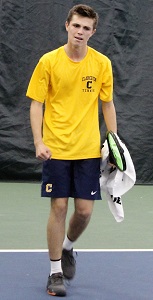 Baylis also dabbled in basketball, an obsession in the Clarkston community. But despite that, he didn’t have any dreams of suiting up for the decorated Wolves hoops program.

“I kind of knew I always liked tennis more,” Baylis said. “I knew I really wasn’t going to be playing varsity basketball, so I moved on and started playing tennis more competitively.”

Claus pointed out there are no situations in matches where Baylis gets frustrated, starts talking to himself or shouts in anger.

“He’s very tough to fluster,” Claus said. “I’ve rarely seen him out of sorts in a match where he didn’t pull through and figure it out.”

Baylis, who currently has a 20-1 record, will play in college at Michigan State, choosing the Spartans over Notre Dame.

“It had the best feeling,” Baylis said of a visit to MSU. “When I stepped on campus, I knew it was right. Nothing felt quite as right as the team at Michigan State.”

Before making the move to East Lansing, he wants to apply the lessons he’s learned the last three years when he gets a final crack at a Finals title next month.

“I got tight in certain situations,” Baylis said. “I think it definitely made me stronger and a little more motivated going into this year after that semifinal loss.”

By the time the Finals wrap up Oct. 19 in Midland, Baylis hopes he’ll have two titles in the bag – a tennis championship to go with a second powder puff crown for his senior class.