A year ago as a sophomore, Forman advanced to the Lower Peninsula Division 1 semifinals at No. 1 singles as a four seed – losing to eventual flight champion Connor Johnston of Northville.

So heading into this season, Forman had high expectations. However, Forman suffered an ankle injury in mid-August that forced him to miss the majority of this fall.

But that didn't stop him from making his mark on the season nonetheless.

Forman stormed through his Regional and was the top seed entering Friday and Saturday’s Division 1 Finals at the Midland Tennis Center.

The junior left-hander captured his first No. 1 singles title, winning the first three games against Bloomfield Hills’ Josh Mukherjee to set the tone in his 6-2, 2-6, 6-1 victory.

"Josh and I played numerous times in the past and we've gone into tiebreakers. But to come in here this weekend and play as well as I did, I couldn't be prouder of the way that I played," Forman said.

"After having to sit out most of the season, this victory is bittersweet. It was a long road back, but to win a state championship is pretty cool.”

Forman credits jumping out to a quick start as the key to his success.

"I played so well in the first set and was able to hit my spots," he said. "I got up, 2-1, (in the second set) and was on serve and felt really good. I just kind of got a little tight and thought a little ahead, maybe. I had to refocus for the third set. It’s always been winning the big points, which I was able to do today.” 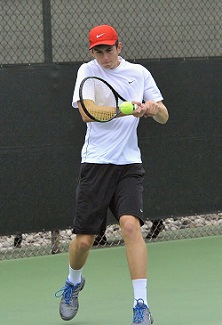 Coach Stefan Welch, who has led the program the past 15 seasons, watched his team battle to finally capture the championship with the No. 1 doubles victory of Chris Cho and Brenden Chen over Birmingham Brother Rice’s Josh Anschuetz and Travis Tucker, 7-5, 6-4.

Huron finished with 30 points, and Bloomfield Hills was second at 28.

"Our kids really battled," Welch said. "This was a very hard-fought win. We got off to a slow start this morning, but I am proud of the way we came together as a group and got this done."

Heading into the day, Bloomfield Hills was seeded third or higher at all but one flight, led by top seeds Andrew Zhang at No. 2 singles and Constantine Hemmrich at No. 3.

Zhang cruised to the No. 2 title after defeating freshman Luke Baylis of Clarkston, 6-1, 6-0.

Freshman Sahil Deenadayalu, the top seed at No. 4 singles, defeated senior Brad Silverman, 6-3, 6-3, to keep Huron in the title hunt. Silverman was a runner-up his final two seasons.

Hemmrich repeated at No. 3 singles, winning this time 6-3, 6-2, over Owen Kelley of Huron.

Other winners on the day included Novi’s Aakash Ray and Nayan Makim, who defeated Troy's Vedaant Garg and Spencer Liu, 7-5,1-6, 6-2 at No 3 doubles. At No. 4, the team of Gabe Kleer and Josh Lee of Ann Arbor Pioneer defeated Troy's Vishal Bethamcherla and Ricky Young, 6-2, 7-6 (0).

PHOTO: (Top) Ann Arbor Huron' Sahil Deenadayalu stretches out for a return during a No.4 singles match at the Division 1 Final on Saturday at Midland Tennis Center. (Middle) Troy's Steve Forman sends back a volley at No. 1 singles. (Click to see more from HighSchoolSportsScene.com.)