KALAMAZOO — Ann Arbor Greenhills came together as a team to win its eighth consecutive Lower Peninsula Division 4 championship, but later Saturday afternoon they were a team divided.

After earning 36 points for their ninth title in the last 10 years, the Gryphons planned their traditional celebration at Buffalo Wild Wings with one exception.

“They were hoping to finish in time to watch the Michigan-Michigan State football game,” coach Eric Gajar said. (They did).

“Most of the guys from Ann Arbor are obviously big Michigan fans. A couple of us, including myself, are Michigan State fans, so it’s a little bit of a house divided. But it’s fun to be together to watch it. These guys love being together.”

Greenhills won five flight titles with one more possible at No. 4 doubles. West Bloomfield Frankel Jewish Academy could not play until after sundown Saturday, so the quarterfinal match against Traverse City St. Francis was played Saturday evening. Grosse Pointe Woods University Liggett will play the winner in the semifinal and Greenhills has already advanced to the championship match. Both will be played on Sunday.

On Saturday, University Liggett finished second with 28 points and St. Francis third with 19. 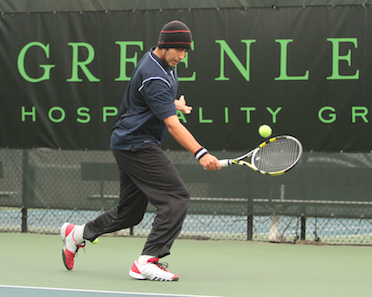 “My No. 3 player (Spencer Warezak) from last year didn’t even play this year. He’s been hurt the whole season. We should get him back, so it’s only like losing one player.”

Gajar said he has warned his players that Liggett is closing in.

“I’ve been telling the guys all year long that objects in the rearview mirror are closer than they appear,” he said. “Last year they were second, this year they’re second.

“I have great respect for the program and the coach has done a great job with these guys. I told the Liggett coach that I think they’re the team to beat next year. Traverse City is right there, too, and doesn’t graduate a lot of guys (four). There’s a couple coming for us.”

Greenhills had winners at three singles flights, but it was the No. 1 doubles team that clinched the team title.

“We didn’t know we won while we were on the court, but once we were off the court, my coach told me,” Johnson said. “I think it would have helped knowing. I play better under pressure.

“It’s just the perfect way to end my career here at Greenhills. I couldn’t ask for a better partner and a better season.”

Harris, who was on the junior varsity team last year, said the two are good friends and “we make each other better. We have good chemistry.”

On Saturday, Weaver was down 4-1 before battling back to win the first set. In the second, Ford was up 5-1 and Weaver fought back to 5-4 before Ford closed out the set.

“Nobody gives up out here,” Ford said. “I thought, I’m not going to win state if I don’t win this (second) set so I have to pull it out somehow. To win (the title) is unbelievable.”

In the third set with Ford leading 5-3, Weaver dropped to the court, writhing in pain with a leg cramp. Ford grabbed a bottle of water and took it over to him while they waited for the trainer. After treatment, Weaver got back up and finished the match.

“I just tried my hardest,” he said. “This was my last match of the year and I wanted it really bad. I always fight hard for everything.”

Being down in the first set, “I just kept playing,” Weaver said. “I didn’t really get mad at myself. I definitely had more pressure on myself to perform better than last year.”

Otsego coach Chuck Parker said Ford has been working on his game since he was a child.

“Every year he got better,” Parker said. “He learned from his loss last year in the semifinals. He’s survived some really tough matches. His only loss this year was to (Portage Central’s) Bill Duo (who won the LPD2 title at No. 1 singles on Saturday).”

Talsma worked his way up from No. 1 doubles last year. 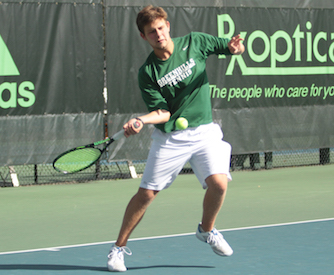 “I worked hard over the summer and found myself at 2 singles,” he said. “(Ilitch) and I played twice before and I won both.

“It helped my confidence going in but even if I had lost them, I would have still gone into the match with the same amount of gusto and enthusiasm.”

The two played on one of the front three courts at Kalamazoo College’s Stowe Stadium.

“Since I was on (one of the front courts) I was a little nervous, but he’s a good player,” Ilitch said. “He’s got a good serve.”

Gajar said losing Feldeisen to graduation this year is going to leave “big shoes to fill.”

“He’s actually never lost a D-4 match in his career,” Gajar said. “He was captain this year and last year.”

Feldeisen defeated Spigarelli earlier this season, but, “You know they want to beat you the second time, so you have to make sure that you cannot only beat them the first time but also the second time,” Feldeisen said.

“It’s more pressure, not like I beat him once so it’s going to be easy. In reality, it’s not easy ever.”

Spigarelli, who lost in the second round at No. 3 doubles last year, said: “I was very surprised this year that I got this high at 3 singles to be a two seed. This year I’m definitely happy with the way I’ve played and the way I’ve improved.”

At No. 4 singles, junior Andy Xie, the top seed from Greenhills, defeated third seed Andrew Staricco, a sophomore from Liggett, 6-2, 6-2.

“I’ve been playing really well this weekend,” Xie said. “He was a really nice player. It could have gone either way, in my opinion.

“I’ve played him twice in the regular season (and won both). It definitely does help mentally. Half the game is a mental game.”

As for the consecutive team titles, Xie said:  “It’s something we think about. It’s always in the back of our minds, but we just want to let loose and have fun. Winning’s just a bonus.”

Staricco upset second seed Victor Casler, of St. Francis, 6-3, 4-6, 6-3, in the semifinals and credits learning to hit with topspin as the reason.

Greenhills won the No. 2 doubles title, with top seeds senior Connor Todd and junior Mitchell Gajar pulling out a tough three-setter over Liggett’s second seeds Will Gersch, a senior, and Dave Sekhon, a junior, 6-7(4), 6-2, 6-3.

PHOTOS: (Top) Greenhills’ Brandon Johnson waits for a return as partner Jack Harris follows through on his serve during their No. 1 doubles match. (Middle) Otsego’s Luke Ford returns a shot on his way to winning No. 1 singles. (Below) Greenhills’ Sam Talsma smashes a shot during his No. 2 singles championship match. (Click for more from HighSchoolSportsScene.com.)