ANN ARBOR – Ann Arbor Greenhills boys tennis coach Eric Gajar was quick with a response when asked about his team's secret to its current eight-year run as the MHSAA Division 4 champion.

“The secret is having good players,” he said with a smile.

Gajar, in his 22nd season as Greenhills coach, probably should have said, “The secret is having a lot of good players.” And that is the reason why Greenhills, which lost five key players from last year's championship team, is primed to make a run at a ninth consecutive title.

Gajar was in a similar position in 2011, having lost six players from the team that captured title No. 4 in its current streak.

“That was a year when I thought we were going to rebuild, hold our own and see how we could do,” he said. “A couple of teams beat us in the regular season, and even leading right up to the state tournament we were not seeded to win it. But we were certainly a contender, and we ended up winning that one.

“This is similar situation with missing five guys out of 12.”

While the roster is nearly half empty of regulars from last year, the players who are back and the continued reloading of the program still make the optimism much more than half full.

Gajar will certainly miss Gage Feldheisen, who won an individual Finals title at No. 4 doubles as a freshman and then won three consecutive singles titles – and he did it without losing a match to a Division 4 opponent during his career. Brandon Johnson, a three-time Finals champion in doubles, including the past two at No. 1 doubles, also has graduated, as has Connor Todd, who won at No. 2 doubles last year.

In addition to the losses of Feldheisen, Johnson and Todd, Greenhills will be without Amar Nigam and Kris Gulvezan, who teamed to win No. 4 doubles last year.

Having five MHSAA champions who won't be around to defend their titles certainly is a hit to Greenhills, but nobody is feeling sorry for the Gryphons, who have some excellent returning players and two potentially impactful freshmen.

Depth is the key

For a team to win eight consecutive titles, it takes more than a few good players. To put it in perspective, the seniors on this year's team were in the third grade the last time Greenhills failed to win an MHSAA team championship.

“Ann Arbor is a great tennis community,” Gajar said. “These guys grow up playing, and the clubs here do a great job grooming these guys from the time they were 5 of 6 years old. Then they play with all the kids from Pioneer, Huron, Skyline, and all these local guys they grew up playing against were very good players from big schools, so that's part of it.”

The true sign of a tennis team with depth is how it performs at the lower singles and doubles matches. In that category, Greenhills shines. 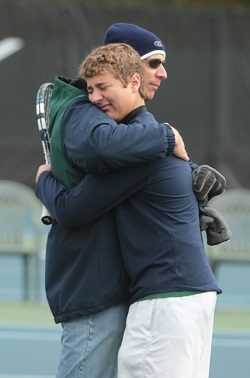 That also is Gajar's background. As a player at Ann Arbor Pioneer, Gajar played doubles and twice made it to the MHSAA championship match only to lose. So he is not bashful when he talks of the pride he takes in working with the doubles teams.

“Doubles certainly is a key part to our success, and that's because of our depth,” he said. “We compete against bigger schools all year long, and they have very good, strong deep rosters, so our doubles guys see high levels of players. We have more depth than teams that are our size.

“I'm such a doubles player – I don't have the patience or the stamina to play singles – so I've always played doubles and loved doubles. Two-thirds of the team is doubles, so we tell these guys when they step into the program from the JV, 'You're probably going to be a doubles player, unless you play your way into a singles spot.' I don't sell it as a demotion.

“Certainly they come to us having played quite a bit, and the middle-school coaches have done a good job of coaching sixth through eighth graders, and then Bob Newton our JV guy gets them ready and works on their stuff for doubles because they usually move up to our program from that.

One could say that Greenhills is still loaded and is reloading this year.

Junior Sonaal Verma is back at No. 1 singles after advancing to the Division 4 semifinals last year before losing to the top-seeded player.

“He certainly is a key, and he is looking as good as ever to us,” Gajar said.

All three of the senior captains – Matt Chatas, Andy Xie and Sam Talsma – are former MHSAA Finals champions. Xie and Chatas teamed to win the No. 3 doubles title as freshmen, and Xie added the title at No. 2 doubles as a sophomore and the No. 4 singles crown last year.

This year, with a pair of talented freshmen slated to singles duty, Xie will return to doubles.

“I have no problem playing doubles,” he said. “It's a lot of fun. It's a completely different game because the chemistry between teammates is very important.

“You can both be really good individual players but not mesh well together, and that's something a lot of people miss, that chemistry between partners.”

With Chatas also likely pegged to play doubles, there is a chance they could become partners again like they were as freshmen. Chatas said that sort of bond between teammates has been a key to the championship success.

“I think what makes this special is just how interconnected the teammates are, including the alumni,” Chatas said. “Over the summer, we have hits that just the players organize, and we'll have alumni show up out of the blue who heard that it was going on.”

Talsma is a three-time MHSAA champion who won at No. 1 doubles as a freshman and a sophomore and then claimed the No. 2 singles crown as a junior. He likely will play No. 2 singles again this season, and he isn't consumed with a shot at a fourth individual title or a ninth consecutive team championship. 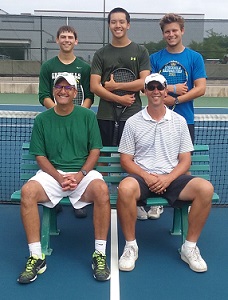 “I don't feel any pressure because I not only feel confident in this year's ability but also our development,” Talsma said. “Of course, I don't want to say that we'll win states because there is always a chance we won't, but I'm fairly confident that this team and the teams the coaches will develop in the future will be capable of winning state championships.”

The two freshmen are slated for singles action.

Kaan Oral might challenge Talsma for the spot at No. 2 singles, and Henry Branch will likely fill in at No. 4 singles.

“Kaan played on our middle school team, and we knew about him,” Gajar said. “He's a tournament player, so he's played a bunch and has a lot of experience already competing at a pretty high level for a freshman.

“Henry has looked good out of the box, and for now, he will probably play our 4 singles.”

“They will probably team up and play No. 1 doubles, which is a tough position,” said Coach Gajar, also Mitchell’s father. “Guys hit the ball a lot harder and they serve harder at that spot.”

Gajar's roots are deep at Greenhills. He is a former math teacher and director of athletics who now works in the admissions office. Teaching the game of tennis comes naturally, and he credits the youth programs and middle-school program as key ingredients to getting the players ready for junior varsity and varsity.

But when they arrive, there is still much work to be done.

“A lot of it in high school tennis is strategy and tactics, learning to be successful and to be in the right position on the court,” he said. “A lot of these guys have never played doubles, and two-thirds of the lineup is doubles. I was exclusively a doubles player, so I take pride in turning out guys who know to move to the net and know where to be and position on the court and be aggressive.”

Talsma explained how Gajar is able to help the players fine-tune their games.

“Every coach has a different way of teaching you something or helping you learn something, and definitely with Mr. Gajar and (junior varsity coach) Mr. (Mark) Randolph, it's like a start-simple attitude.

“Everybody is a good player who comes up in the program from middle school or as a new player, and they focus on the simple stuff. They see how we hit a forehand, how we hit a backhand, and then they put your game together. It's mostly basics, but the majority of it is mental and the type of attitude you are supposed to have.”

It should not come as a surprise that Talsma mentioned Coach Randolph. Gajar said he is “more like a co-coach” than an assistant coach.

“There is nobody better that I've run into who can look at someone and fix a serve or something like that,” Gajar said. “We can tweak things, so when they come in, we can correct some things, and we run them through a series of drills where we work on a specific skill set each day or a particular strategy, and we pound that.”

And there is little mention of eight consecutive MHSAA championships. Or of a possible ninth. They don't talk about breaking an Ann Arbor tie with Pioneer, which also won eight titles in a row from 2001 to the fall of 2007 (boys tennis previously was played during spring instead of fall). And looking ahead to Grosse Pointe Woods University Liggett's record 13 Finals titles in a row from 1972-84 is too far off.

“There is definitely a bit of pressure, but the coaches do a great job of not making us incredibly nervous, and they do a good job of not letting any of us get too big in our heads about having to win,” Chatas said. “It is tough every year, and there are always new schools that are coming up and getting better.

“We always have to work for it, and it's never really a given, and we have to make sure that we know that so we don't go into states thinking that and blow it all.”

Gajar would love hearing that from his players.

“I don't talk to the guys about trying to equal a record or break another one; we're just taking it one step at a time,” he said.

And, throughout all the aces and double faults, forehands and backhands, there is a larger, much more important lesson being taught.

“As much as we're teaching them tennis and want them to be successful, we're also know these are young men who a have a lot to learn in life, and we want them to be responsible and take care of each other and be good citizens,” Gajar said. “We want them to be a good sport, win or lose, so that's as important to us.”