Greenhills clinched the title during the semifinals, but the real dogfight was for second place between Traverse City St. Francis and Allegan.

Ludington was fourth with 15 points, and fifth was a three-way tie between Ann Arbor Gabriel Richard, Grand Rapids Catholic Central and Grosse Ile with 13 points each.

“We were pretty deep and added a couple singles players to the top of the lineup,” Greenhills coach Eric Gajar said of his team’s success. “A guy who transferred and sat out last year at No. 1 (junior Sahil Deenadayalu) and a freshman (Mert Oral) who came in and played No. 3.

“We got to sort of bulk up the singles lineup, which meant we had some guys in the doubles lineup who were pretty good players as well.”

All six Greenhills winners were top seeds at their flights.

St. Francis coach Paul Bandrowski was thrilled with second place, the highest the team has ever placed.

“We had a huge, huge two three-setters at No. 1 singles (in the quarters and semis) and won both of them. It took a battle at every position at every flight to fight through and win this.”

Gajar knew what to expect in the fight with Allegan, which switched divisions this fall.

“We were head-to-head right to the end. Literally down to the last matches on the court at the state finals. The last hour on a rainy day inside at multiple locations.”

Allegan coach Gary Ellis was surprised to find his Tigers in D-4 for the first time ever.

“It was a shock, but a lot of good coaches and a lot of good teams,” he said. “We know Greenhills and St. Francis are as tough as anybody in D-3, and most of the teams in D-2.

“I knew it was going to be tough. I was very pleased with the way our guys played, too. We knocked off some seeds. We won some tough matches. We had five in the semis and three in the finals.”

Third is the highest Allegan’s boys team has ever finished.

At No. 1 singles, Grosse Pointe Woods University Liggett sophomore Will Cooksey breezed to a 6-0 first-set lead in the final before squeaking out the second set 7-6 with a 7-2 tiebreak over Deenadayalu to win the flight for the second straight season.

The only Liggett player still competing Saturday, Cooksey thanked the large contingent of players and parents for staying to cheer him on.

As reigning flight champ, “I felt a little pressure just knowing I had to repeat what I did, but it was a new opponent and I just want to congratulate Sahil on a great tournament,” Cooksey said. “He put up a great fight there at the end, and he worked really hard to get there.”

Deenadayalu knew he would have a tough match against his friend.

“Will’s just a great competitor, and he came out firing,” he said. “I didn’t really know what to do. I kind of eased into it in the second set.

“I started to step up more, hit bigger shots, and I started to go for a lot more on my serve. Then it started to work.” 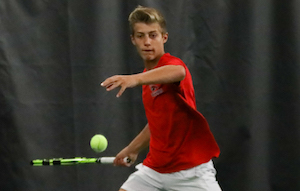 “I have to keep up the winning way,” he said. “I’ve played Elliott four times in two years and every time he comes out hitting those big shots. It was a great match. Kudos to him.”

Bandrowski, whose father coaches St. Francis, said he thought he played well in the first set.

“Actually I played pretty well throughout the entire thing,” he said. “(Oral) was able to figure out what I was doing a little bit and he was able to put some more balls in, and I started missing a bit more.

“I would say the biggest difference was him being able to put one more ball in than me.”

“I think that I’m really consistent and I’ve also been working on my serve, so I got a fair amount of free points,” Oral said. “Also, I think I was mentally strong on key points.”

Schmude credited his team with helping him get to the finals.

“I think my forehand is pretty big, but I wouldn’t have gotten here without my team playing good,” he said. “Last year I got third in 3 doubles. I’ve been playing singles all my life through USTA, so I like singles.”

“We’ve worked really hard this season, and to end it on a high note like this is amazing, especially senior year,” Zirapury said. “To really end your tennis career with a state title is really special.”

Zirapury figured playing a freshman would not be an easy task.

“I’ve seen some really good freshmen,” he said. “Our No. 3 singles is an amazing freshman. Going into it, I knew he was going to be a great tennis player, and I was up for the challenge.”

“I learned that in every match you have a chance to win no matter who you go against,” he said.

While Greenhills’ No. 2 doubles semifinal match was the tournament clincher, the duo lost in the final to St. Francis top seeds Sean Navin and Brandon Chouinard in a nail-biter, 6-3, 2-6, 7-6(5).

Second seeds Drake Rosenberg and Joey Formicola did not know their semis win was the clincher.

The doubles semis were moved indoors to Minges Creek Athletic Club in Battle Creek before the finals were played at K-College’s Markin Raquet Center.

Moving inside was a plus for Rosenberg and Formicola, who were surprised at winning the crucial point.

“I’m not a fan favorite of the wind,” Formicola said. “My forehand’s very good indoors, and my serve is pretty big, and it’s a huge plus to our game to be inside.”

Navin and Chouinard were the only St. Francis individual title winners.

They were tucked back on Court 4 at the Markin Center, the farthest from the bleachers.

“The crowd was crazy,” Navin said. “I could hear two or three people after every single point. It was great to know they were behind us.”

Chouinard said one of the team’s goals was to finish first or second at the Finals “but we knew first was going to be hard because Greenhills is such a great team.”

PHOTOS: (Top) Greenhills' Mert Oral sends a backhand during No. 3 singles action action at the Division 4 Final at Kalamazoo College. (Middle) University Liggett's Will Cooksey makes his way to a repeat title at No. 1 singles Saturday. (Click to see more from HighSchoolSportsScene.com.)