By Greg Tunnicliff
Special to Second Half

MIDLAND – The serve was good.

The Novi freshman was up a set in his No. 3 singles championship match, serving and leading 4-2 in the second when he suffered severe cramps in his left quadriceps.

When the 14-year-old came down after a serve, he was in such great pain that he couldn’t do anything but lie down on the baseline and wait for help to arrive.

After being worked on by medical personnel for several minutes, the top-seeded Wen returned to action and went on to post a dramatic 7-5, 6-4 victory over second-seeded Jack Winkler of Birmingham Brother Rice.

Wen wasn’t the only member of the Wildcats’ team that had a lot of fight in him Saturday. Novi, ranked No. 1, sent five flights to the finals and won four en route to finishing in first place with 31 points.

“We lost by one point last year, and the kids have been working hard ever since,” said Jim Hanson, who is in his 21st season as the Wildcats’ boys coach. “This was our best opportunity to make a run at the title. The kids were wonderful.”

“There is some pretty good tennis in the KLAA at the top,” Hanson said. “Northville is our baseline rival, and I was happy to see them do well. Grand Blanc definitely had a great year.”

While Novi showed great depth Saturday, it was led primarily by its singles flights. The Wildcats swept all four flights, led by senior Tim Wang, who captured his second straight championship at No. 1 singles. 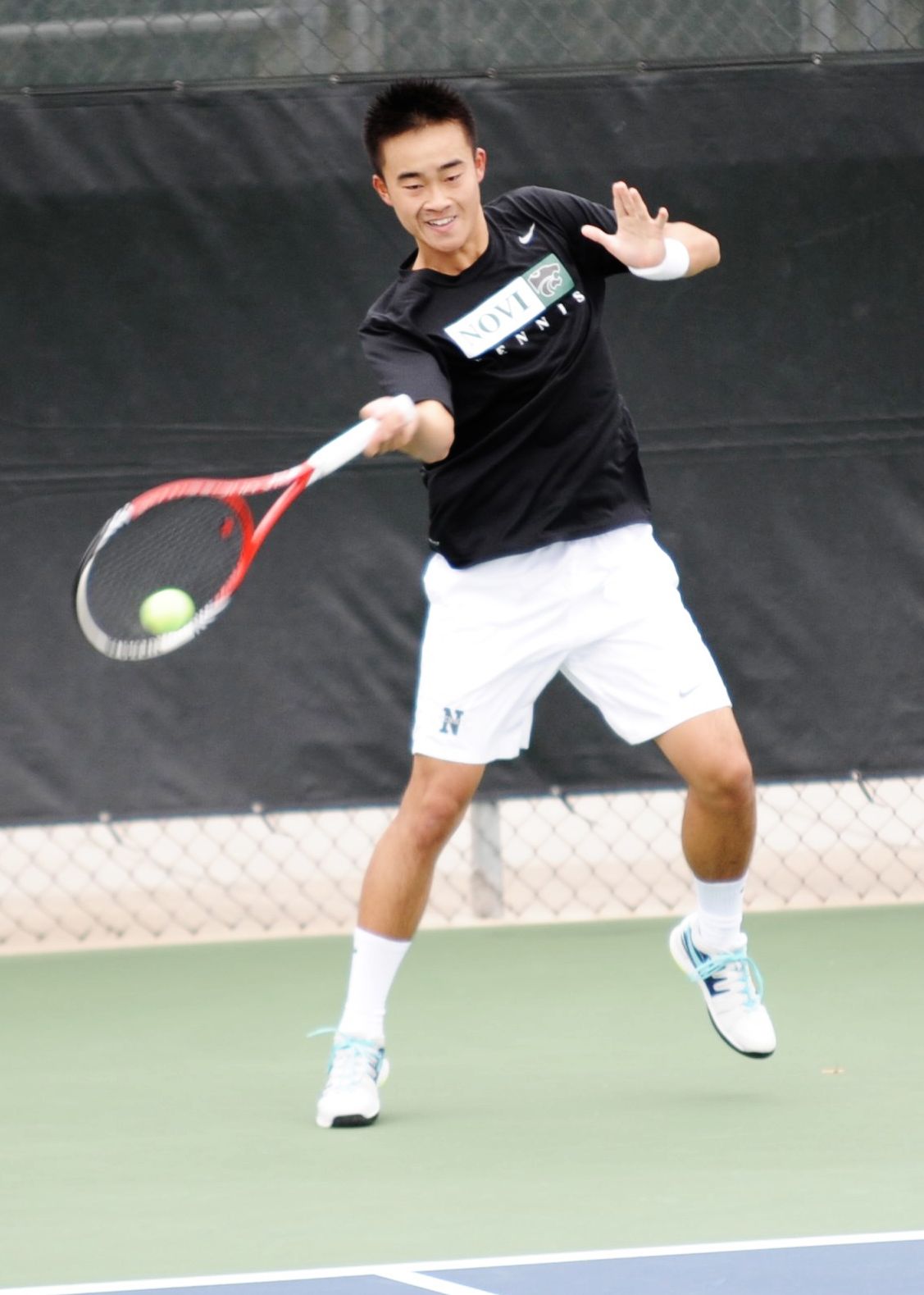 The second-seeded Wang won the first set over top-seeded Connor Johnston of Northville by a 6-4 count before falling behind 3-0 in the second. The Columbia University-bound Wang then came back to post a 7-5 (7-6) triumph to win the set and the match.

It was the eighth time Wang and Johnston have played each other the last two years, the fourth meeting this fall. Wang won the series 5-3, including a 2-0 advantage in MHSAA championship matches.

“Every match has different aspects to it,” said Wang, who lost to Johnston in straight sets in the regional final. “This entire week, I had this match on my mind. I just went back to the drawing board. I was able to find my rhythm, and after that it was everything for the team.”

Novi junior Koushik Kundapi won the championship at No. 3 singles in 2013 before moving up to No. 2 this fall. The top-seeded Kundapi spent a lot of time on the court Saturday, winning back-to-back three-set matches to secure his second straight title.

“I moved up a flight, and the competition was much harder,” Kundapi said. “I had to play tough matches in every round, and I was just happy to get through it.”

Rounding out Novi’s winners was its No. 4 singles player, senior Andre Liu. The top-seeded Liu rolled through his draw, winning all four of his matches in straight sets, including a 6-4, 6-2 victory over Timothy Kao of Skyline in the finals.

Huron captured two of the four doubles flights, led by its No. 1 doubles team of Jason Chen and Austin Choi. The twosome lost twice to Brother Rice and once to Novi during the regular season.

It was the first MHSAA Finals championship for Chen and Choi.

“Our semifinal match was a momentum-changing match,” Choi said. “We came out stronger (in the championship match). We had a better attitude, and we played a lot better.”

Huron’s other individual champion was its No. 3 team of Alex Cadigan and Brenden Chen. The top-seeded tandem beat a team from neighborhood rival Ann Arbor Pioneer, 7-6 (7-1), 6-3, in the semifinals before downing second-seeded Dan Lunghamer and Sean Aberlarde of Brother Rice, 3-6, 6-2, 6-3, in the finals.

“In the Pioneer match, we were very aggressive at the net, and we went for the right opportunity,” Cadigan said. “In the championship match, we played some of the best tennis we have played all season. We knew what we wanted to do, and we did it.”

Brother Rice secured its only individual championship when its No. 2 doubles team of Brendan Dillon and Christian Abelarde, who were the second seed, upset top-seeded Will Brenner and Orion Sang of Huron, 6-2, 6-0, in the finals.

Rounding out the doubles champions was Troy’s No. 4 team of Annesh Raslogi and Brandon Guo. The third-seeded team upset second-seeded Pioneer, 5-7, 6-3, 6-2, in the semifinals before edging fifth-seeded Travis Tucker and Sam Schwartz of Brother Rice, 4-6, 6-4, 7-6 (7-3), in the championship match.