NOVI – After 11 years, Okemos boys tennis coach Chris Silker is riding off into the coaching sunset to spend more time with his three young children and focus on his real estate business.

But before doing so, Silker finished one last ride with another group of kids he’s helped raise on the tennis court for the past 12 to 13 years.

For the third time in four years, Okemos captured an MHSAA Finals championship, although this time it was in Lower Peninsula Division 1 with an 8-0 win over Ann Arbor Pioneer in Friday’s championship match at Novi High School.

“I’ve been with these seniors since they were 5 and 6 years old,” Silker said. “I’m just really excited to be able to finish with them.”

The Chiefs tied for fourth at last year’s tournament, but Silker said that proved to be a springboard to this year.

“It is a different level of play, and what we got out of it was that we really belonged,” Silker said. “Our top three sat out last year, and we still tied for fourth. That showed that we belonged here. We knew we were going to be back in this position for these kids to have a shot at it.” 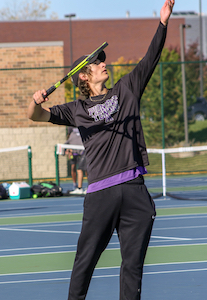 In order to lessen the crowds of players and parents at the event during the COVID-19 pandemic, a new team finals format was instituted.

Instead of teams scoring points based on how well their individuals did against other opponents in each flight, the format this year was a 16-team, bracketed tournament of dual matches.

“To be honest, my guys were stoked for this format,” Silker said. “It really brought us closer together. We have really enjoyed the event.”

Also enjoying the format was Pioneer coach Tom “Brick” Pullen, who has coached the boys and girls tennis programs at Pioneer since 1990.

“I’ve pushed for this format from the beginning,” Pullen said. “I feel that it’s all about team versus team. I like this format.”

The Chiefs began the tournament Thursday with a round of 16 win over Grand Blanc (8-0) and a quarterfinal win over Novi (7-1).

Okemos then came back to the courts Friday morning for a semifinal match against fifth-seeded Troy, winning 7-1.

Pioneer entered the final with a lot of momentum following a 6-2 win over city rival and No. 2-seeded Ann Arbor Huron, a team Pioneer lost to twice during the regular season.

Pioneer had beaten Bloomfield Hills in the quarterfinals (5-3) and Eisenhower in the round of 16 (8-0) on Thursday.

Pullen said Okemos was simply too strong for his team, which was spent emotionally following the semifinal win over Huron.

“I think we did burn ourselves out,” Pullen said. “Okemos is a stronger team than us, no question. We didn’t have much left after playing Huron. We lost to them twice during the year, and that was our state tournament right there.”

Okemos gave up only nine games in the final. Druv Talluri and Shrey Patel at No. 1 doubles and Siddharth Nagisetty and Ethan Portnoy at No. 2 won in shutouts, while Yoonho Cho and Benjamin Wei at No. 4 and Joshua Portnoy (No. 1 singles), Colson Wells (No. 3) and George Fan (No. 4) lost one game apiece. Rohan Shah won his No. 2 match 6-2, 6-0, and Abhi Shukul and Diego Casagrande won at No. 3 doubles 6-0, 6-3.